Anticipated ‘UNRELEASED’ WWE DVD Next for 2018 Schedule, Photos of This Week’s BACKLASH DVD

You may have noticed our WWE DVD Release Dates page update recently with complete release times for the next couple of months, but which anticipated title will be scheduled next?

WrestlingDVDNetwork.com has learned that “Shawn Michaels – The Showstopper Unreleased” looks to be the next 3-disc DVD superkicking its way onto the schedule! If plans stay as they are right now we’ll be able to own it in late September or early October.

This collection of never-before-released HBK matches and moments follows on from “Randy Savage Unreleased: The Unseen Matches of the Macho Man” put out last month and there may be even more Superstar-themed sets joining them in 2019; Ultimate Warrior and Roddy Piper “Unreleased” concepts have both appeared on WWE surveys issued to fans in the past 12 months.

Back to the 2018 schedule, that still leaves a handful of empty slots for 3-disc sets planned for the latter part of the year. The titles on the original list of 2018 WWE DVDs unveiled last year by PWInsider.com all wound up being made official with the exception of “Shane McMahon’s Craziest Matches”, cancelled in favor of “Then, Now, Forever: The Evolution of WWE’s Women’s Division”.

That suggests as well as Michaels we still have another two on the way:

PPVs on top, one of which will be “Greatest Royal Rumble” reportedly releasing on DVD in November.

We mentioned in recent weeks that a mystery WWE DVD was added to the 2018 schedule – which it had been because this title had yet not been given a name. However, the unnamed release showed up when plans for the “Greatest Royal Rumble” DVD were up in the air and presumed cancelled.

It took us by surprise that this PPV was instead releasing in November (and with what looks to be a documentary feature added to it) but it turns out the mystery wasn’t much of a mystery after all: “Greatest Royal Rumble” has taken the unnamed release slot. 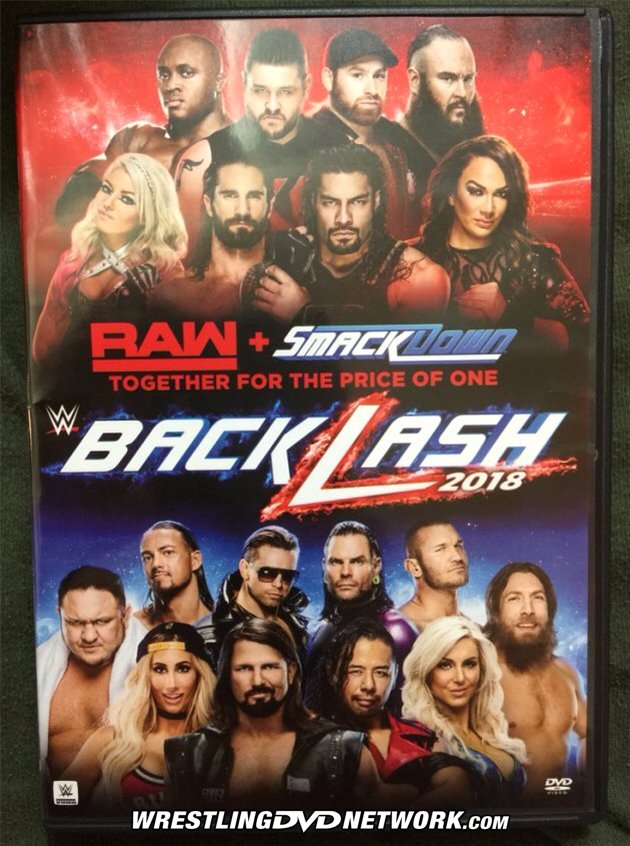 Heads up, Backlash 2018 officially released on DVD this week to stores across the United States. WrestlingDVDNetwork.com has your first look!

Get hold of your copy now by clicking here to Amazon.com.

The 3-hour and 25-minute Pay-Per-View event was held just last month at the Prudential Center in Newark, New Jersey and featured bouts the likes of Daniel Bryan vs. Big Cass, Alexa Bliss vs. Nia Jax, Charlotte Flair vs. Carmella, The Miz vs. Seth Rollins, Randy Orton vs. Jeff Hardy, Roman Reigns vs. Samoa Joe, and Shinsuke Nakamura vs. AJ Styles.

Backlash 2018 has been squeezed onto a single-disc DVD here with a 3-hour and 17-minute runtime (likely with a few non-essential commercials and such cut from the original broadcast).

So let’s take a look — special thanks to WDN readers Matthew and Jordan for the pics!

Eagle-eyed WWE DVD collectors will notice that the DVD has Canadian age ratings printed on it in addition the usual U.S. ones (TV-PG in this case). As you know, Warner Bros. recently took over distribution of WWE Home Video content in Canada so we believe this change was simply made so that Warner Bros. can release the same product to multiple regions without producing a variant. 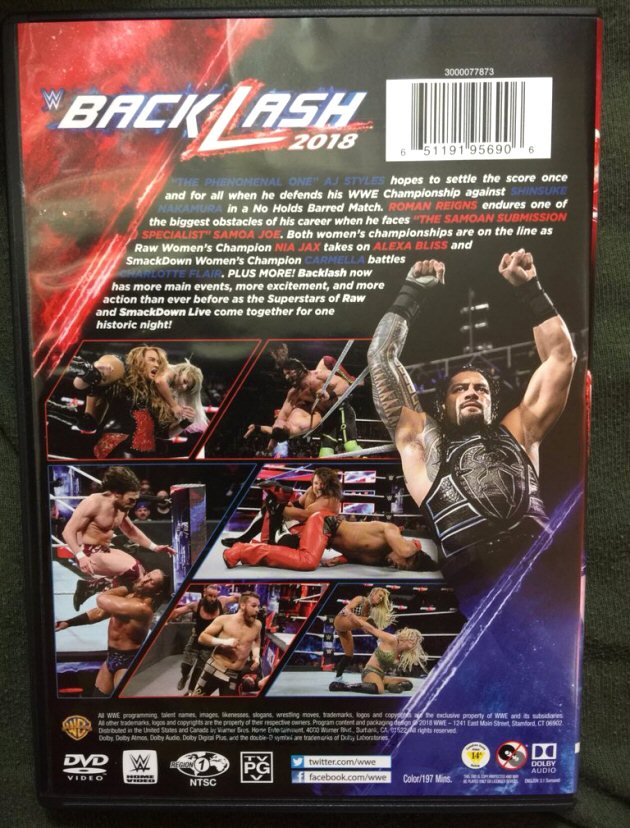 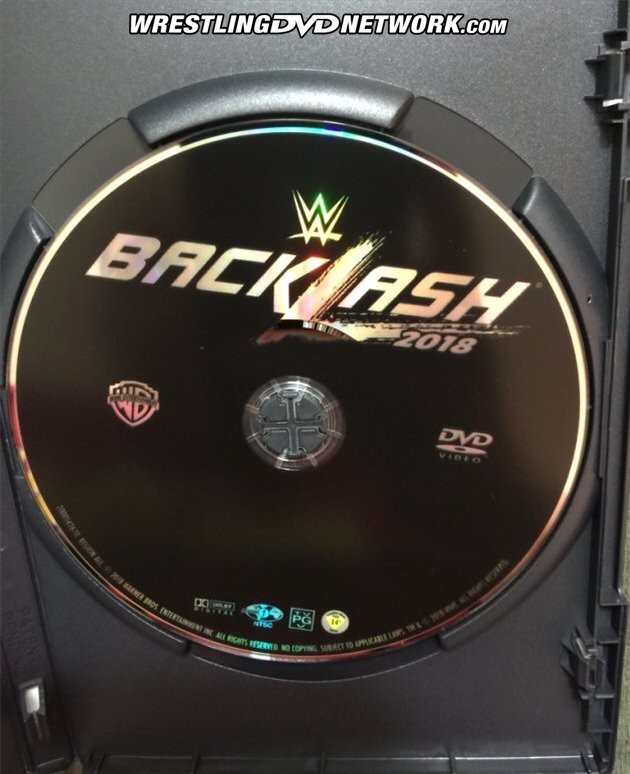 “The Phenomenal One” AJ Styles hopes to settle the score once and for all when he defends his WWE Championship against Shinsuke Nakamura in a No Holds Barred Match. Roman Reigns endures one of the biggest obstacles of his career when he faces “The Samoan Submission Specialist” Samoa Joe.

Backlash now has more main events, more excitement, and more action than ever before as the Superstars of RAW and SmackDown Live come together for one historic night!

None on the discs.

However the U.S. release of Backlash does include an AJ Styles trading card inside the packaging! 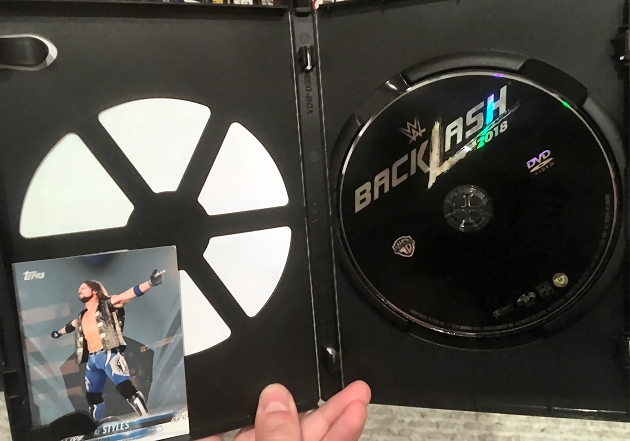 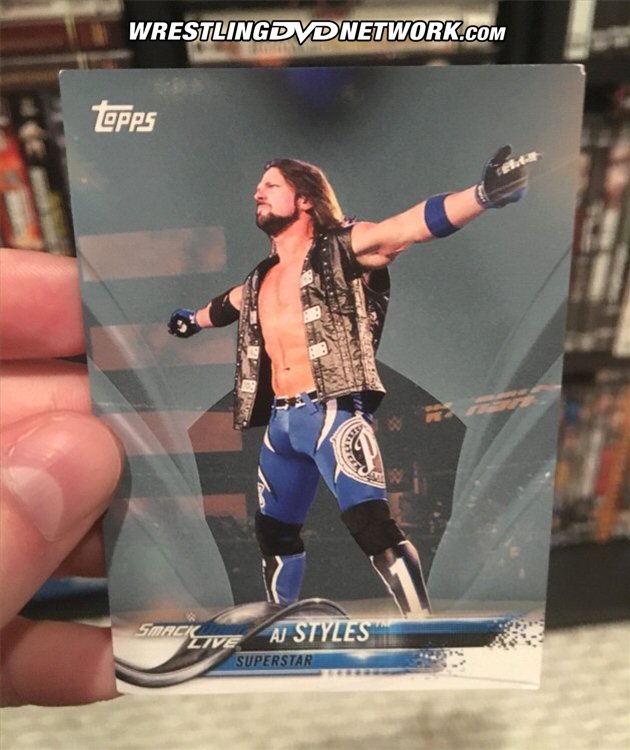 – United States: RIGHT NOW! Get a copy of the Backlash 2018 DVD here on Amazon.com.

– Australia: July 18th. Pre-order your Backlash DVD in time for then over at Madman.com.au.

– UK/Europe: July 23rd. Get your copy of Backlash on DVD very soon via Amazon.co.uk. 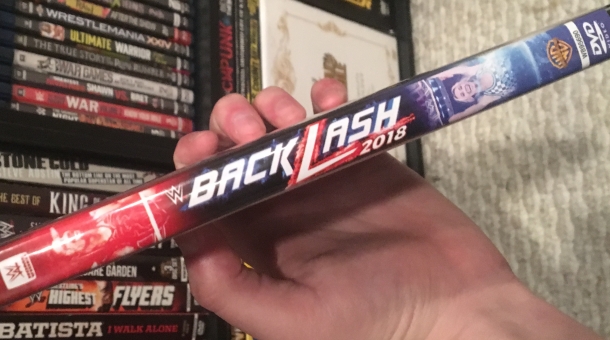