This week our own Aaron Carnevale of WWEDVDNews TV joined Wrestleview.com‘s Monday Night Mayhem radio show to discuss the recent CM Punk: Best in the World documentary and the 2013 WWE DVD schedule.

You can listen to show below, which also features THQ’s Bryan Williams talking in depth about the release of WWE ’13 and its new features. Enjoy! 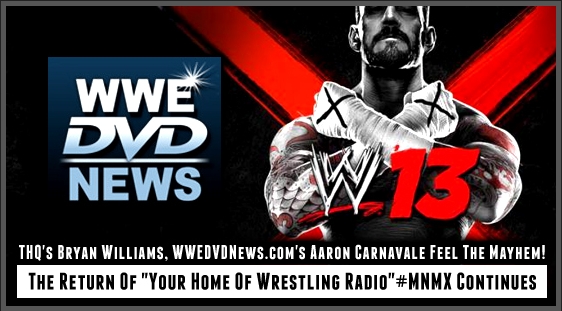 Hosts: The Big Mosh, “The Chairman of the Board” Todd Vincent
Special guests: THQ’s Bryan Williams, Aaron Carnavale of @WWEDVDNews

7:50 – Bryan Williams of THQ joins the show to talk the release of WWE ’13 this week
16:48 – Discussion on the upgrades to WWE ’13 including Create-a-Wrestler and creating arenas
23:15 – Looking at the Attitude Era mode and Paul Heyman helping to write for the game this year
48:23 – Aaron Carnevale joins the show to talk WWE producing great DVD releases this year
53:18 – Thoughts on the CM Punk DVD release this year and how great the documentary was

Speaking of Aaron Carnevale, he recently helped put together the video shown below, as an entry into a contest. The more eyes on it the better, so the WWEDVDNews readers can all help him out in his quest by giving it a quick watch. Thanks!

Get your copy of CM Punk: Best in the World DVD/Blu-ray.

Get your copy of the WWE ’13 video game.