“Do you take this woman as your lawful wedded wife?”

The documentary preview clips this time focus on Elizabeth, with discussion of Elizabeth being introduced as Randy Savage’s manager and their on-screen wedding at SummerSlam 1991. Lanny Poffo, Ted DiBiase, Gene Okerlund and Dolph Ziggler provide comments.

Watch the full documentary next month with the release of the new Randy Savage DVD and Blu-ray. The pre-order price of the DVD is down to only $19.99 here on Amazon.com.

The new Chris Jericho DVD looks to be going ahead, now confirmed to be a WWE project. Jericho once again made reference to it on a “Talk is Jericho” podcast episode.

Jericho also discussed the prospect of including Chris Benoit matches, stating that WWE probably wouldn’t permit it and that he personally would have reservations doing so.

The new Chris Jericho DVD/Blu-ray is right now slated for release in 2015.

“Putting together a couple of my DVDs, and we’re working on the second one right now, that’s probably a combined total of about fifty matches that are on there between those two DVDs but I could never include a Benoit match. One, I don’t think I’m allowed to. Two, I don’t know if I’d want to, and that was one of the greatest moments of my career. Absolutely one of my favorite opponents and probably a dozen classic matches that I’d want to put on there, including the ladder match we had at the Royal Rumble in 2001, which I think is one of the best ladder matches of all time, totally forgotten because of Chris and the fact they don’t show any of his matches anymore.

Also too what was voted the best match in Raw history by a lot of people, Jericho and Benoit vs. Triple H and Austin, so famous for being the night H tore his quad during the match, the crowd going bananas and the first time anybody had vanquished the evil Steve Austin and Triple H. It was a huge night in WWE history, a huge moment in the history of the Tag Team Championships and a huge moment in the history of my career, and I can’t ever see that match really. I can’t watch that match. I think I’ve watched it once and it’s good, it’s a great classic five star match, but it’s always tainted when I see Chris Benoit…” 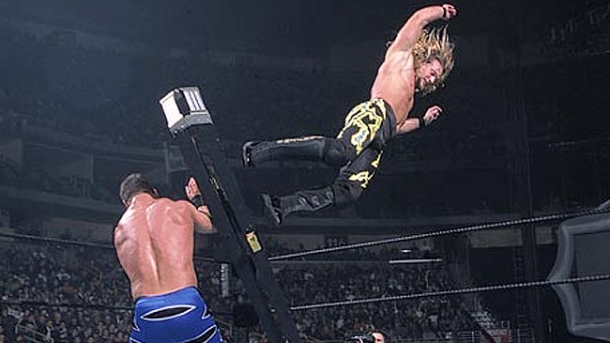 Who’s ready for WWE Hell in a Cell this Sunday?

To celebrate, you can take 20% off orders here at WWEShop.com (now through the HIAC weekend). That works on all merchandise lines, with no minimum spend required.

The promo code you need at checkout is “SAVE20”.

As you’ve seen, the preliminary cover artwork for the Hell in a Cell 2014 DVD features Dean Ambrose. Despite that probably being temporary art, the Australian distributor mentioned recently on Facebook that it will feature Dean Ambrose, as shown below.

The “RAW 20th Anniversary Collection” DVD, which was never released to the UK and Europe, has been airing to UK fans on Sky Sports in the run up to Hell in a Cell.

Arda Ocal, now known as Kyle Edwards, is hosting the feature. Arda has also been hosting “Bottom Line” since signing with WWE, a recap show broadcast to international markets. 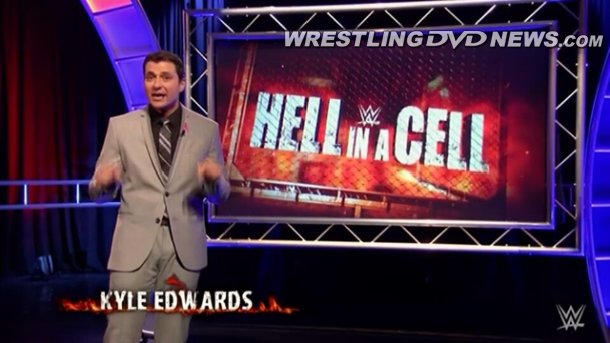