Coliseum Corner: Best of “In Your House” (Part 2) – Dawning of Attitude

Welcome back to Coliseum Corner’s ‘Best of In Your House’, in anticipation of the WWE DVD release next year.

Back in Part 1 we touched on the classics that 1995 and 1996 had to offer. Although there were some poor quality matches surrounding these gems, they are still worth checking out if you are a wrestling historian. Now we will pick it up from 1997. More action, more moments, more attitude! 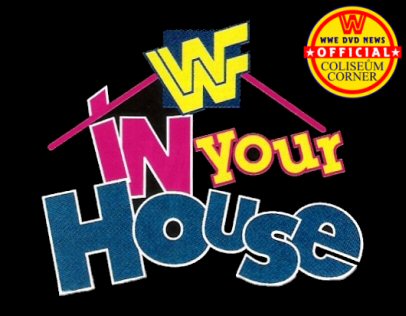 On February 16, 1997, In Your House – Final Four was shown live from the UTC Arena in Chattanooga, Tennessee. The main event; a Four Corners Elimination Match for the vacant WWF Championship. At the Royal Rumble a month before, Stone Cold Steve Austin had been eliminated from the 30 man Battle Royal by Bret Hart. However, referees didn’t notice the elimination take place. Seeing this, Austin capitalized on this and was responsible for the exits of; Undertaker, Vader and Bret Hart, before beeing crowned the winner of the 1997 Royal Rumble. At the same event Shawn Michaels regained his WWF Championship from Psycho Sid. Shortly before Final Four, it was decided that Bret Hart, Vader, the Undertaker and Austin would face in a four corners elimination match with the winner facing Shawn Michaels at Wrestlemania. However, Shawn appeared on Raw three days before the event and forfeited the title, telling fans about his knee injury and how he had lost his smile. The match was quickly changed to a WWF Championship match. 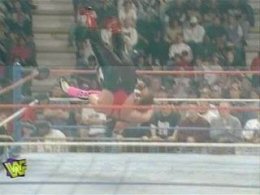 With this stipulation in mind, the match was an insane brawl. The way to win was to throw the opponent over the top rope until one man remained. This was a mini Royal Rumble, if you will. As the match went on, chair swinging and illegal moves aided each competitor’s arsenal before each one’s elimination. This one’s a must watch.

On July 6, 1997 from Calgary, Alberta, Canada at the Saddledome , came an event which many consider the best In Your House PPV of all time. This Canadian Stampede hosted only four matches and all four were gems. The PPV kicked off with Mankind and Hunter Hearst Helmsley, who were in the midst of a heated rivalry. A month previous, Hunter had beaten Mankind in the final of the King of the Ring Tournament. After his win Triple H brutally attacked Mankind which set up this match for the PPV. The next bout was between two imports from Michinoku Pro Wrestling. The Great Sasuke and Taka Michinoku put on a display of high flying brilliance. These two superstars were virtually unknown to North American audiences, yet they lit up the crowd with their sensational abilities. The next match was the WWF championship match between the Undertaker and Vader. Paul Bearer was Vader’s manager and was constantly taunting the Undertaker about a secret he wouldn’t want everybody to know. Bearer revealed that The Undertaker had burned down the funeral home where he lived, killed his parents in the process and badly burning his younger Brother Kane. Undertaker claimed that Kane had committed this crime and he was to blame. 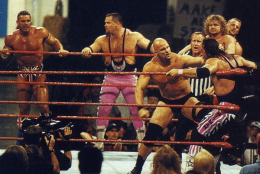 In the main event, the Hart Foundation; Bret Hart, Owen Hart, The British Bulldog, Jim the Anvil Neidhart and Brian Pillman met Stone Cold Steve Austin, Ken Shamrock, Goldust and the Legion of Doom in a heated grudge. Canada VS USA. The Hart Foundation were hated in America but beloved in Canada. Bret Hart, the leader of the group expressed the importance of being a hero to his fans all over the world and that he wouldn’t turn his back on them. He just didn’t like Americans. The entire Hart family were at ringside, including Natalya, David Hart Smith and Tyson Kidd. All decked out in Pink and Black, the Harts played the heroes on this night and the usual “good guys” were booed. This heated rivalry spiraled into one of the most emotional and exciting bouts in WWF history and concluded what was an exceptional event.

On October 5, 1997 from the Kiel Center in St Louis, Missouri, In Your House 18 Badd Blood hosted the very first Hell in a Cell Match. The Undertaker fought European Champion Shawn Michaels for number one contendership to meet WWF Champion Bret Hart at Survivor Series. The purpose of the Hell in a Cell match was to keep anybody from interfering in the match. At Ground Zero a month before, the Undertaker was met with interference from Shawn Michaels’ running buddies Hunter Hearst Helmsley, Chyna and Rick Rude (D-Generation X before the announcement of their name). In this match a definite winner would be decided. This match became a display of brutality never seen before in the WWF. Both Superstars used the cage for leverage to hurt one another so much so that both Taker and HBK even went out and to the top of the cage further brutalize each other. Unfortunately for Shawn Michaels, he left the top of the cage much quicker than his opponent. This match also marks the debut of Kane. It’s a stunner. 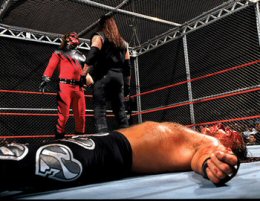 Three other matches that might be of interest from this era are from In Your House 19 – D-Generation X are; Taka Michinoku VS Brian Christopher to crown the first Light Heavyweight Champion, Triple H VS Sgt Slaughter in a Boot Camp Match and Shawn Michaels VS Ken Shamrock for the WWF Championship.

On April 26, 1998 at Unforgiven and May 31 1998 at Over the Edge, The Attitude Era was in full swing with Stone Cold Steve Austin defending his title against Dude Love. Twos where Mr. McMahon showed his true colours and stopped at nothing to prevent Austin from holding on to the WWF title. The McMahon/Austin rivalry really began to heat up. At Unforgiven, McMahon tried to screw Stone Cold like he did Bret Hart, but to no avail. At Over the Edge he made himself the special referee. This still didn’t stop Steve Austin from retaining his title. Check these hard hitting battles out especially for the punishment Dude Love (Mick Foley) endured. 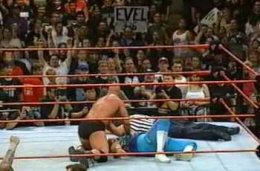 On July 26, 1998 from Fresno, California came Fully Loaded. Up and coming soon-to-be main eventers Triple H and The Rock met in an excellent 2 out of 3 falls match for the Intercontinental title. As respective leaders of D-Generation X and The Nation, these two men’s careers were parallel, each one climbing the ladder. These two superstars went 30 minutes with each man’s group doing everything they could to help them win the battle for the Intercontinental Championship.

On February 14, 1999 at St Valentine’s Day Massacre, Stone Cold Steve Austin and Mr. McMahon’s rivalry was at an all-time high. So much so their hatred for one another was taken to a steel cage. At this time, Mr McMahon had his own corporation of men who were simply out to get Steve Austin and any other Superstar that crossed their path. Austin had taken many beatings and was gunning for the owner of the WWF. Stone Cold battered and bruised McMahon, even sending him from the top of the cage. When the bell finally did ring the match only got hotter. This match also marks the debut of the Big Show.

So there you have it – a look back at some of the greatest ‘In Your House’ moments in history. While Coliseum Video only released the first 18 IYH spectaculars, the legacy of the event continued. In this instance an exception has been made to inspire you to hunt down these classics and watch all 28 of these historic events. If your favourites were not covered here, let us and everybody know by leaving a comment below. See you next time!