Welcome to this week’s Coliseum Corner.  In this edition we will be discussing five Intercontinental Championship matches that were released on WWF Coliseum Video. 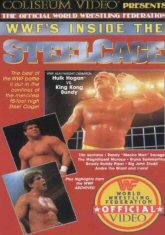 In what had been a heated rivalry, Madison Square Garden was to host the feud ending match between champion Muraco and Snuka.  As both men approached ringside, they analysed the cage’s sturdiness.  Commentator, Gorilla Monsoon informed viewers that never in the history of cage matches had one collapsed.

Both Superstars stood nose to nose in the middle of the ring before trading forearms to the head.  The ‘Superfly’ gained an early advantage by overpowering the ‘Magificent One’.  Superfly slammed the champion’s head into the turnbuckle, knocking him down.  Far from scientific, Snuka continually knocked Muraco over.  His desperation led him to run for an early escape from the cage.  Fiji native, Snuka used his dominance to bring Don Muraco back in and continue his punishment.  The Intercontinental Champion stood unsteadily against the ropes, when Jimmy leapt at him.  Muraco ducked and the crowd favourite hit the cage head first.

The tide had turned and the champ went to work.  He delivered a slingshot to Snuka, again sending him head first into the cage.  Muraco continued to weaken Snuka, but ‘Superfly’ soon found his second wind.  He climbed the cage in an attempt to escape but Muraco brought him crashing down with a giant slam.  Jimmy Snuka, a bloody mess, found strength one more time to punish his rival.  He sent the IC champ into the cage, reminiscent of the punishment he had encountered.  Jimmy elevated Muraco into the cage, but instead of falling, he went through the cage door.  The ‘Superfly’ had thrown his opponent to his victory.

Devastated by the loss, Snuka showed anger and frustration.  He dragged the Intercontinental champion back into the ring where he continued to beat his nemesis.  Then, in one of the most famous moments in the WWF at Madison Square Garden, Jimmy Snuka climbed to the top of the steel cage and delivered the Superfly Splash from fifteen feet in the air.

Mick Foley was in attendance that night and was amazed by the spectacle.  It inspired him to make the infamous tape of him diving off his best friend’s roof! 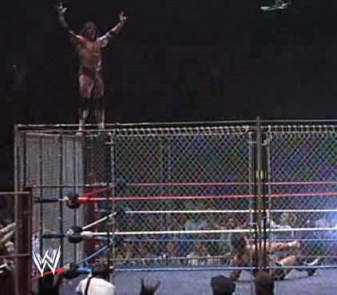 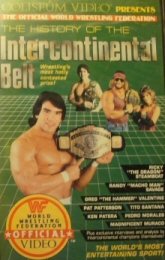 On the second Saturday of February 1986, Randy Savage challenged the Intercontinental Champion Tito Santana for his title.  As always, the ‘Macho Man’ had Elizabeth accompany him to the ring and live from the Boston Garden, these two Superstars did battle.

The match started off slowly, both exchanging arm bars and waist locks.  Frustrated by Tito’s ability to match his skills, Savage retreated to the outside where fans taunted him.  Returning to the ring, Santana maintained the advantage.  The ‘Macho Man’ again retreated but this time Tito followed.  Randy hit the champion with a shot to the gut.  He rolled him back into the ring and climbed to the top.  Tito saw the double axe-handle coming and countered it with his own shot to the gut.  He hit the atomic drop before attempting a pin.  Savage easily kicked out and raked the champion’s eyes.  The ‘Macho Man’ took control of the match with a series of kicks to the mid-section, following it up with a devastating clothesline.  Randy hooked Tito’s leg for a near three count.  Taking advantage of the fatigued Santana, he climbed to the top rope and hit his patented double axe-handle.  With fire still inside, the IC champ refused to stay down.  Savage threw him to the outside.

As Tito made his way back into the ring, Savage prevented him from doing so.  Macho, from inside the ring, tried to drive Santana’s head into the turnbuckle (Tito was on the ring apron by this time).  He failed to deliver as Tito Santana blocked it and slammed his head into the turnbuckle pad.  The Intercontinental Champion made his big time comeback and executed a flying elbow onto the wobbling ‘Macho Man’, and then trapped Randy in the figure-four leg lock, but he made it to the ropes.  Obsessed with getting the lock back on, he dragged Savage back into the middle of the ring.  Able to escape, Savage found salvation on the ring apron. Santana went to suplex Randy back in, but while in the air ‘Macho Man’ hit the champ with a foreign object.  Out cold Randy Savage pinned Tito to become, the new Intercontinental Champion. 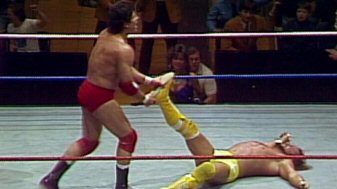 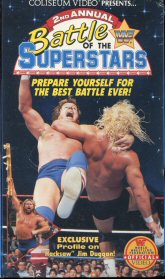 At WrestleMania VI, it was the Intercontinental Champion who had won the WWF Championship.  Warrior was unable to hold both titles and was forced to surrender one of them.  A tournament was held to crown a new champion.  Mr. Perfect and Tito Santana were the finalists.

This was somewhat of a brief encounter. The title bout began with both Perfect and Santana using skilful wrestling holds.  Both Superstars hit the ropes ducking one another’s attacks.  Mr. Perfect used a leg take down to momentarily ground his opponent.  Quickly making it back to his feet, Tito locked Mr. Perfect’s arm up his back.  In what was an unusual display, Perfect reversed it into the same hold which Santana again reversed.  This happened multiple times as commentator Vince McMahon shouted, “They’re going round and round”.  Tito put a stop to it with an elbow, knocking the flawless one down.

Tito looked more aggressive than usual and brawled with Mr. P on the outside.  Back in the ring, he used an arm bar and arm lock to wear down his opponent.  He followed up with a series of shoulder blocks from off the ropes, until he tripped over his fellow challenger and sent himself out of the ring.  Perfect fetched Santana and brought him back in and used kicks to the ribs, chest and stomach to gain the advantage.  He pummelled the fan favourite – Tito until he once again fell to the outside.  The Mexican veteran tripped the ‘perfect one’ who was still inside and wrapped his legs between the ring post.  He slammed his left leg against the post twice, before referee Joey Marella warned him that he was risking disqualification.  Meanwhile, Mr. Perfect’s leg was giving out and Tito went to work on it.  Just when it looked like Santana had the match won, Bobby ‘The Brain’ Heenan raced to ringside.  He was able to distract him, allowing Perfect to roll up Santana for the win.  Mr. Perfect lifted his new Intercontinental Championship high above his head with his new manager ‘The Weasel’ in toe. 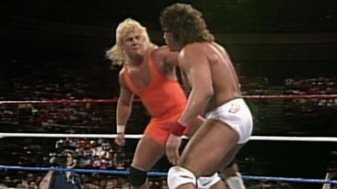 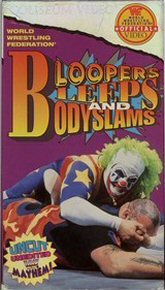 Marty Jannetty went straight to work on his former tag team partner.  He used his tank-top to choke Michaels and slam him round the ring and Irish whipped him from corner to corner, which made the cage rattle.

Michaels blocked Jannetty’s attempt to force his head into the cage and found his way back into the match. Jannetty was far from beaten and was able to punish Michaels once again.  This time he managed to ram Shawn’s face into the cage.  He was making his way to the cage door when the Heartbreak Kid stopped him.  Dazed, but awake, HBK gained control and used his foot to choke Marty.  He couldn’t let Jannetty leave the cage.  This cage match became a back and forth affair, as Jannetty prevented Michaels from leaving also.  They ascended to the top where HBK was brought back down, exposing his rear end in the process.

This battle continued with both constantly trying to escape.  Eventually, Shawn Michaels began to weaken Jannetty, putting him in the sleeper.  This enabled him to rest before his next exit attempt.  Meanwhile, Marty still fighting for survival, used a desperation manoeuvre to catapult his former partner into the cage.  Powering through the pain, Michaels caught up to Jannetty who was again climbing the cage.  Marty could only get one leg over the top when the Heartbreak Kid pulled him down.  Shawn used the opportunity to get over the cage, but the ‘Rocker’ acted quickly and just in the nick of time prevented Shawn from landing on the arena floor.  Jannetty had Shawn hanging by his hair, giving him no choice but to re-enter the ring.  Marty disposed of his former friend and climbed the cage.

Shawn’s new bodyguard, Diesel climbed the cage from the outside and attacked Marty.  Undeterred, Jannetty disposed of Diesel and began his descent.  What he didn’t notice was that the champion was at the cage door and had reached the floor before him.  Shawn Michaels retained his Intercontinental Championship, thanks to Diesel! 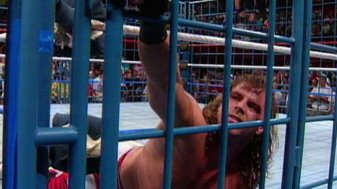 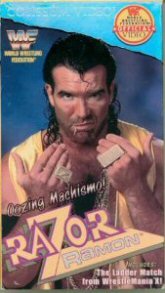 Shawn Michaels had failed to defend his Intercontinental Championship within thirty days.  So, President Jack Tunney stripped him of his title.  In reality, Shawn had been suspended for six weeks after being found to have traces of steroids in his system.

A Battle Royal had taken place the week before, where the final two would meet for the vacant championship. Winners Razor Ramon and Martel would do battle on RAW.

This encounter began with the two Superstars trading wrist locks.  Martel caught in a few slaps which frustrated the the ‘Bad Guy’.  The match, a slow starter, saw ‘The Model’ gain an early lead with a combination of right hands to Razor’s head.  Martel, the quicker of the two, dodged Ramon’s attacks and continued to lay in shots.  Razor caught the model with his patented fall-away slam, bringing Model’s momentum to a halt.  Martel did make a comeback, but the Ramon used his power to prevent any real damage from being done.  Razor’s strength proved successful when he held Rick Martel in an arm lock in which he jerked the arm against his body.

The veteran Martel managed to find an opening and went for Ramon’s back.  As much punishment Razor had delivered, ‘The Model’ used his experience to work on a part of the body razor Ramon relied on.  Rick Martel applied his signature Boston crab which did further damage.  ‘The Bad Guy’ refused to quit and received a back breaker for his trouble.  He again felt the pain of the Boston crab, but still wouldn’t quit.  Razor found the courage and tenacity to overcome Martel’s punishment and trapped him in the Razor’s Edge.  That was the day Razor Ramon won his first Intercontinental Championship belt. 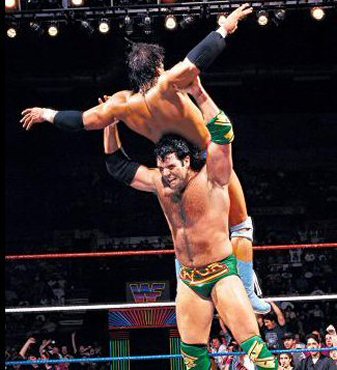 That’s all for this entry into Coliseum Corner. Don’t forget to follow me on Twitter. Also, join in the discussion going on in the new WDN Community forums, where you are eligible to win WWE DVD prizes each and every month!
Follow @ColiseumCorner