Welcome to the first of a special two part installment of Coliseum Corner – WrestleMania’s Forgotten Matches.

On April 7; the biggest, most important event on the wrestling calendar will take place. On this day is WrestleMania XXIX. Every year, as soon as the winner of the Royal Rumble points to the Mania logo that hangs high in the rafters, we know that the Road has begun and standing before us is the challenger for a World Title at the ‘Granddaddy of Them All’.

It has been said, that every Superstar should aim to be in the Main Event at WrestleMania. It’s obvious that; this is the most successful show of the year, the place to forever be a part of history. Many wrestlers have said, that they want their “Mania Moment” and to “steal the show”. This is the event where Superstar’s careers can skyrocket, or end. This is the show that creates the most entertaining and legendary moments in WWF/E history. When you think of WrestleMania, you probably remember; Randy Savage vs Ricky Steamboat, Andre/Hogan, the Ultimate Challenge or the Iron Man Match between Bret Hart and Shawn Michaels.

However, for every historic moment, there are not so memorable moments and matches that appear to have been forgotten about by either fans or WWE themselves. In keeping with the Coliseum Corner theme (WWF CV releases only), there is at least one match at Mania that we never seem to hear of anymore… until now. Coliseum Video released 1-13 and in this part we will revisit a forgotten match for each of the first six WrestleManias. 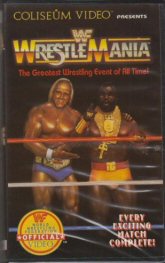 This was the first ever match at a WrestleMania. Shortly before the match began both wrestlers were interviewed by ‘Mean Gene’ Okerlund and guaranteed a victory. Underneath the mask of the Executioner, was Playboy Buddy Rose (unbeknownst to fans). The opening bout saw Tito dominate much of the match sending his opponent over the top rope where the masked man landed in a seated position on a chair. This match went back and forth with The Executioner delivering a few blows and knockdowns until Santana connected with his patented El Paso de la Meurte, followed by a figure-four leg lock for the win. 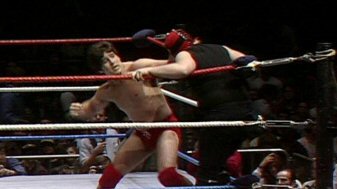 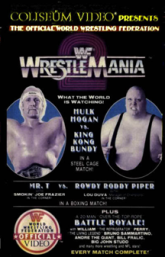 Another forgotten match involving Tito Santana? Yes indeed and this encounter featured three other celebrated legends. Live from Los Angeles, this tag team affair offered a mix of athleticism and aggression. Almost straight away, this became a wild brawl.

Junkyard Dog dominated in the ring, using weighty punches and convincing knockdowns. JYD and Hoss (Dory Funk Jr) exchanged blows somewhat similar to bare knuckle boxing. Terry Funk displayed his usual crazy personality which made for some interesting viewing. He and Santana used speed to counter one another’s attacks. The Funk’s manager, Jimmy Hart even put the boots into Tito, providing extra support to his unit. The climax to the match saw Jimmy throw his megaphone to Terry who knocked JYD out behind the referee’s back. After a count of three, the Funks were the Superstars with their hands raised. 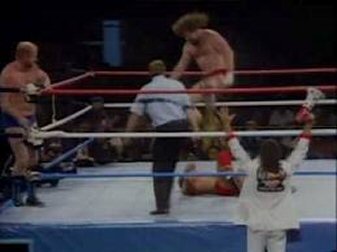 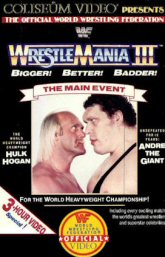 This mixed tag team match involved 6 Superstars with two on each team being “midget” wrestlers. The rules of the match meant that neither Bundy nor Hillbilly would be allowed to compete with the midgets. After a series of sneaky shots to Bundy, Little Beaver was unfortunately caught by the giant Bundy and squashed. This caused him to be disqualified for being in the ring with someone other than Hillbilly. Following the conclusion of the mixed tag team bout, Bundy’s teammates aligned with Hillbilly’s team after the ruthless attack and the country boy saved the day. 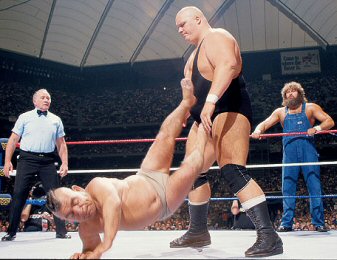 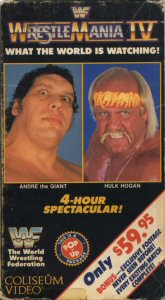 In the build-up to this encounter, The Islanders had “dog-napped” the Bulldog’s mascot Matilda. Haku and Tama’s manager Heenan had been goading Matilda to taunt The Bulldogs. At match time, Heenan came prepared in dog bite proof attire to protect him from the revenge seeking Matilda.

This grudge match ensued with wild brawling from the Bulldogs. Dynamite Kid and Tama began with some fast moving action before the Islanders gained the advantage. Davey Boy smith and Haku then took to the ring with the latter hitting a backbreaker. Dynamite and Tama came back in where the former was victim to a back-body drop. Both men went for the tag and in came KoKo. He hit the Islanders with a missile dropkick and a frankensteiner before tagging back out to the Dynamite Kid. Haku managed to take him down allowing The Brain to come in and take some cheap shots. Eventually all six men were in the ring until the ref escorted the Bulldogs back to the corner, allowing the Islanders to pick Heenan up and throw him on top of B. Ware to pin for the win. 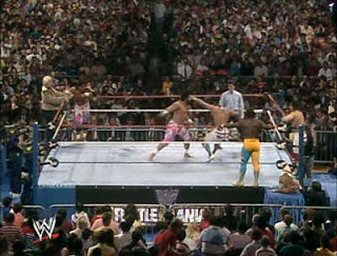 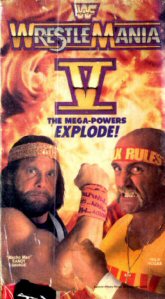 Beefcake attacked the money man and took him to the outside where the two would brawl. As the two Superstars re-entered the ring, DiBiase’s bodyguard, Virgil grabbed the barber’s leg which gave DiBiase an opening for a clothesline followed by a chokehold. Next, he hit a middle rope diving back elbow drop on Beefcake for a two count. He tried to hit a vertical suplex on Beefcake but Brutus countered the move with his own hanging vertical suplex. DiBiase applied a Million Dollar Dream on Beefcake, but couldn’t keep hold. He slammed Million Dollar Man’s face into the corner and applied the sleeper until Virgil distracted him. DiBiase nailed Beefcake from behind which sent him to the floor. Teddy occupied the referee while Virgil put a beating on Beefcake but the Barber shook it off and chased Virgil around the ring until the Million Dollar Man nailed Beefcake from behind. The two wrestled outside the ring until they were counted-out. The assault continued. 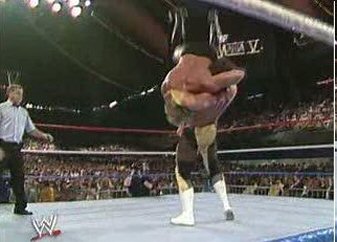 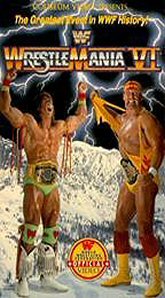 The thirteenth out of fourteen matches on the 6th installment of WrestleMania saw a low profile match between Rick Rude and the Superfly. Lasting just under four minutes, this bout didn’t have time to make an impression.

As Snuka was still preparing for the match with his back turned, Rude jumped him from behind. The ravishing one put a beating on Jimmy until he failed to connect with a dropkick. Snuka catapulted Rude into the ropes and followed up with a back body drop before mocking his opponent’s signature taunt. The Superfly proceeded to drive Rick Rude’s head into the mat, repeated head-butts knocking him to the ground. Shortly after, Snuka made his way to the top rope for his patented splash but Rude made it to his feet before he could leap. Superfly jumped over Rude and picked him up for the bodyslam. Just a few seconds later the ravishing one was up and connected with the Rude Awakening. The winner, Ravishing Rick Rude. 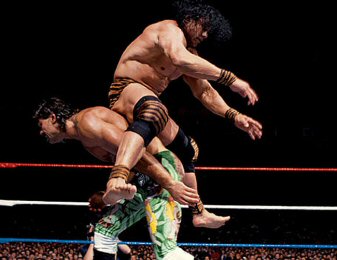 Be sure to check out the final part of WrestleMania’s Forgotten Matches coming soon. Until then, follow @ColiseumCorner on Twitter for more nostalgic WrestleMania memories.