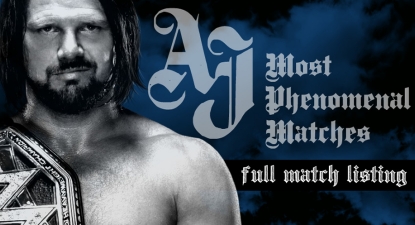 As first reported earlier today by WWE Home Video UK these are the “Phenomenal” matches that will grace the content of WWE’s first-ever AJ Styles DVD!

“AJ Styles – Most Phenomenal Matches”, a 3-disc set, will present 20 full-length matches spanning AJ’s entire career with WWE so far with footage from January 2016 all the way through to July 2018.

The bouts selected involve a who’s-who of WWE Superstars and feature AJ’s partnership and rivalry with Chris Jericho, two main event matches with Roman Reigns, three matches in which he competed with John Cena, all of his WrestleMania matches including against Shane McMahon and Shinsuke Nakamura, his Survivor Series headliner with Brock Lesnar, his two WWE Championship wins to date, multiple United States Championship matches, right up to Styles’ match with Andrade “Cien” Almas last week on SmackDown Live!

WrestlingDVDNetwork.com can now exclusively add in 11 chapters that accompany those matches (including newly-filmed interviews with AJ Styles) to bring you the complete disc-by-disc content listing WWE has in the works for this anticipated collection.

The 2018 AJ Styles DVD is available to pre-order now in the United States here on Amazon.com and will be ready to follow soon in the United Kingdom via Amazon.co.uk.

Here's the trailer for AJ Styles: Most Phenomenal Matches – out on 3-disc DVD 5th November! See our Facebook page for the full match listing! https://t.co/r9QmLymCRi pic.twitter.com/G3fNgmE6eB

The Face That Runs The Place

The Elephant in the Room