WWE will release the “Destruction of The Shield” DVD and Blu-ray set tomorrow!

Be sure to get your pre-order in here on Amazon.com in time for then.

While you’re waiting to get your hands on it, a preview will air on the WWE Network tonight.

After The Shield, we know that the new Chris Jericho, Ultimate Warrior, ECW Unreleased Vol. 3, Jerry “The King” Lawler, and Daniel Bryan DVDs are all confirmed on the way.

Using recent news reports and rumors on 2015 WWE DVDs, and your own queries sent to us, below we’ve put together and answered 10 yes/no questions which should help you know a little more about what is and what isn’t planned with WWE Home Video the rest of the year.

YES. Last September, DDP revealed that he had signed to host a Volume 3 in the series. Nothing much was heard since but we can confirm that it’s still WWE’s plan to release the DVD/Blu-ray set. It’s looking like that will be toward the end of summer or into fall.

NO. As it stands now, there will actually NOT be a Booker T DVD. The report by PWInsider about the DVD being in the works came out just before the announcement that a “Booker T: Sentenced to Greatness” mini-documentary will air this month on the WWE Network, therefore it looks like the two were confused. Perhaps the DVD is a contender for next year.

Will “bloody” matches on WWE DVDs be shown black and white in 2015?

YES. Well, kind of. That’s the case in the “Destruction of The Shield” DVD but it should be noted that the Shield set is rated TV-PG. The black and white trend may well continue on WWE DVDs this year, but you won’t find it on TV-14 titles like the upcoming ECW Unreleased Vol. 3.

Is the long-rumored Bruno Sammartino DVD finally coming in 2015?

NO. A Bruno Sammartino WWE DVD has been speculated for quite a while now and the company did actually interview Sammartino for a career retrospective last year, but we can confirm that there are currently no plans to release such a DVD/Blu-ray set this year.

Is the pushed-back Monday Night War DVD actually going ahead in 2015?

YES. Despite the DVD series being pushed back and the format being changed from 3 discs to 4, the plan is still to release all 20 episodes (and extras) on Home Video. Volume 1 looks to be going ahead for a release this summer, while Volume 2 looks to be coming in winter.

Is this the cover artwork for the Daniel Bryan DVD in 2015?

NO. The “Daniel Bryan: Just Say Yes! Yes! Yes” DVD is on the way but this cover artwork that surfaced is just temporary for now. Actually, the recently revealed cover for the Jerry Lawler DVD was also confirmed as temporary despite it looking like the finished article. 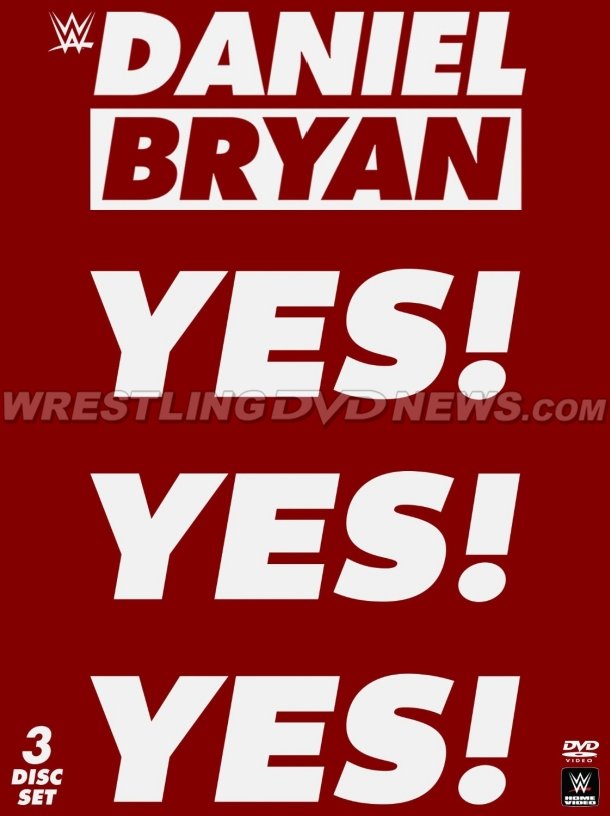 YES. Expansions of WWE Network content on to DVD/Blu-ray looks to be a continuing trend – there should be at least 1 more title coming this year in addition to Monday Night War.

NO. As it stands right now the company has no plans to release NXT content on DVD. We’re often asked if the PPV specials like ArRIVAL and TakeOver will see a Home Video release but unfortunately we haven’t yet heard of anything of the sort on the way for 2015.

Will PPV DVDs in general and UK exclusive PPV Blu-rays survive in 2015?

Will we finally get a full blown Undertaker career DVD with documentary in 2015?

NO. We’re hearing that 2015 is still not the time for that, as far as indications go so far this year. That’s not to say there won’t be a different Taker DVD released though and there surely will one day be that career documentary DVD/Blu-ray set that we’re all pining for.

What about TNA, will Impact Wrestling DVDs even be around in 2015?

YES. ShopTNA not long released Bound for Glory 2014, One Night Only: World Cup 2014 and One Night Only: X Division Xtravaganza 2014 on DVD to fans in the United States. TNADVD.co.uk will release those 3 titles to UK fans in April through June, and they’ve hinted that they are trying to get Superstar specific TNA DVDs produced when possible.