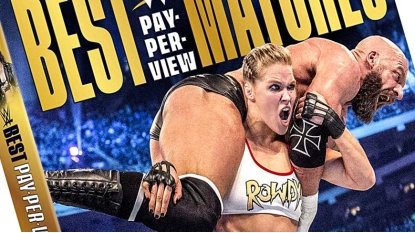 Let’s get a look at the cover artwork for WWE’s first 3-disc DVD collection planned for next year!

Following the usual pattern WWE DVDs in 2019 will kick off with a retrospective of stand-out matches witnessed this year with “Best Pay-Per-View Matches 2018”.

These PPV-themed Home Video features typically pack in around 15 to 20 full-length matches and the cover artwork of the next edition reveals what one of those matches will be: Ronda Rousey and Kurt Angle vs. Stephanie McMahon and Triple H from WrestleMania 34!

What’s left of the front cover, and the official synopsis, give us some hints at several other matches slated for inclusion – the Triple Threat Intercontinental title match between The Miz, Seth Rollins and Finn Bálor (also from WrestleMania), Roman Reigns and Braun Strowman’s match inside Hell in a Cell, the women’s Money in the Bank Ladder Match, Roman Reigns vs. Bobby Lashley from Extreme Rules, and one match Becky Lynch and Charlotte Flair had during their feud from either Hell in a Cell, Super Show-Down or the all-women’s Evolution PPV.

The new “Best Pay-Per-View Matches 2018” DVD has been scheduled for release to fans in the UK on January 14th and pre-orders are about to go live here on Amazon.co.uk. A release date for the United States has not yet been set but is expected to fall in the same week as the UK if not before, while as we’ve mentioned previously Canada gets it on January 22nd.

Are you up to date with your WWE DVD purchases this month?

November has already seen the release of the 3-disc set “AJ Styles – Most Phenomenal Matches”:

Followed up with the Greatest Royal Rumble PPV DVD this week:

And in less than 2 weeks from today, Super Show-Down too!

Check out our exclusive photos of an early Super Show-Down DVD pickup if you haven’t already.