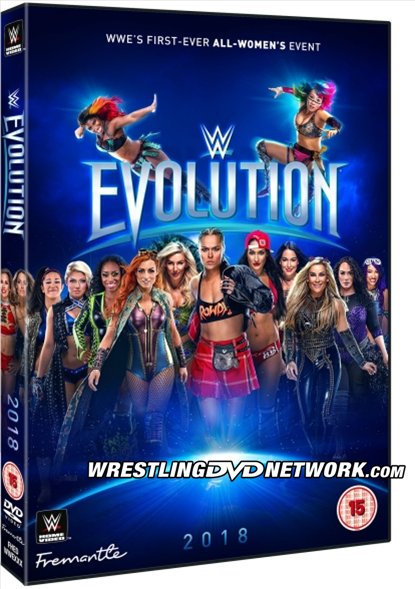 The official cover artwork for the Home Video release of WWE Evolution 2018 has been unveiled which you can check out above or click to see it SUPER-SIZED.

WWE’s first-ever all-women’s PPV will arrive on DVD format in Q1 2019, with the first confirmed release date so far being January 7th to the United Kingdom and elsewhere in Europe. Fans there can pre-order now with WWEDVD.co.uk. A worldwide release is expected.

As for the artwork, as you can see it is based off one version of the event’s poster artwork we saw in promotion ahead of the PPV, now extended to include Sasha Banks, Trish Stratus and Mickie James.

It would appear that the show having a 3-hour and 16-minute runtime when originally aired means that it can be squeezed onto a single-disc DVD so any additional extras are unlikely.

One of three new WWE DVD offerings this month is another recent Pay-Per-View extravaganza, Super Show-Down 2018. Watch the trailer here.

Speaking of artwork earlier, the Australian release of this DVD will differ slightly as this version puts emphasis on Australia being the hosts of this event in large block letters at the top at the box art. Beckly Lynch and AJ Styles will appear alone on the spine which is another difference.

WWE will be producing Super Show-Down as a 2-disc DVD set (with extras) and you can grab a copy for only $15.99 by clicking here to Amazon.com. 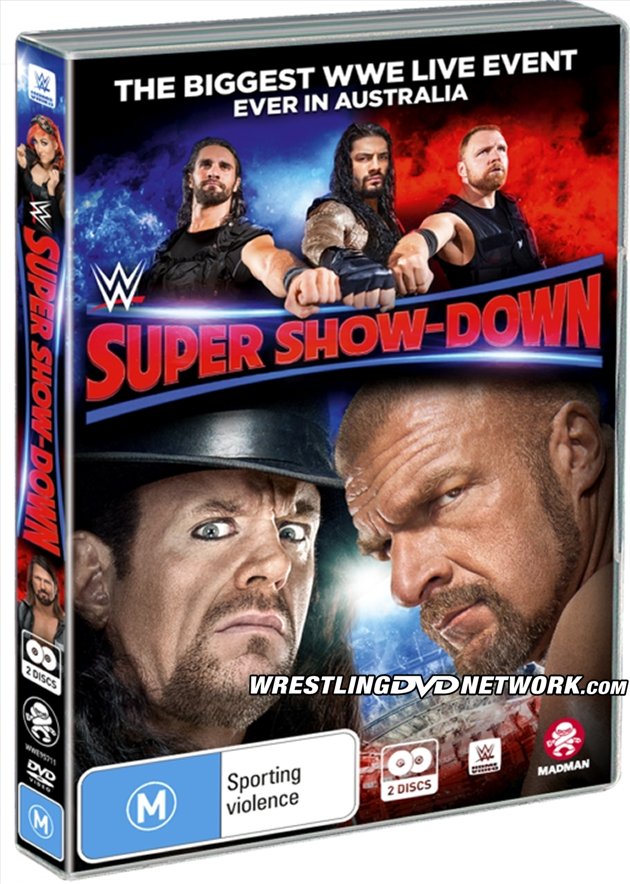 So, in usual WrestlingDVDNetwork.com fashion, let’s take a look at some first look photos of the final product and its packaging layout. We have the U.S. version pictured which hit stores yesterday – thanks goes out to Matthew Tremble for sharing. 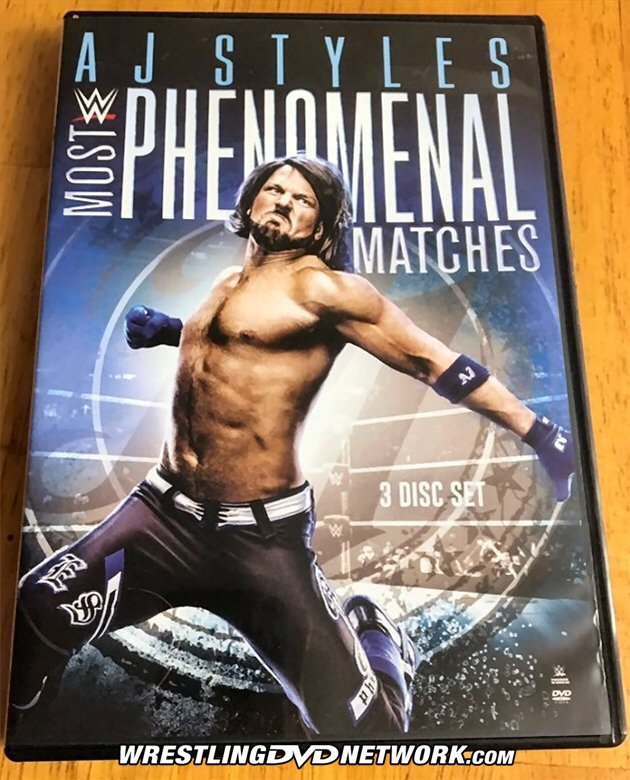 “AJ Styles – Most Phenomenal Matches” delivers 20 of AJ Styles’ greatest matches from WWE to your collection; more than 8 hours and 40 minutes of footage when factoring in the 11 newly-filmed interview segments with Styles that accompany the bouts.

The set journeys from January 2016, the month that AJ Styles debuted in WWE, right the way through to now in 2018 and it’s a stacked collection featuring all of AJ’s WrestleMania matches to date, his two WWE Championship vicotories, three matches where he faced John Cena, two matches with Roman Reigns, and his Survivor Series battle with Brock Lesnar last year among many more!

Following recent trends this new WWE Home Video release comes packaged in the slimmer Amaray style case rather than a Digipak which ceased in a decision made by Warner Bros. earlier this year. Inside are the three discs and a double-sided paper insert which details the content. 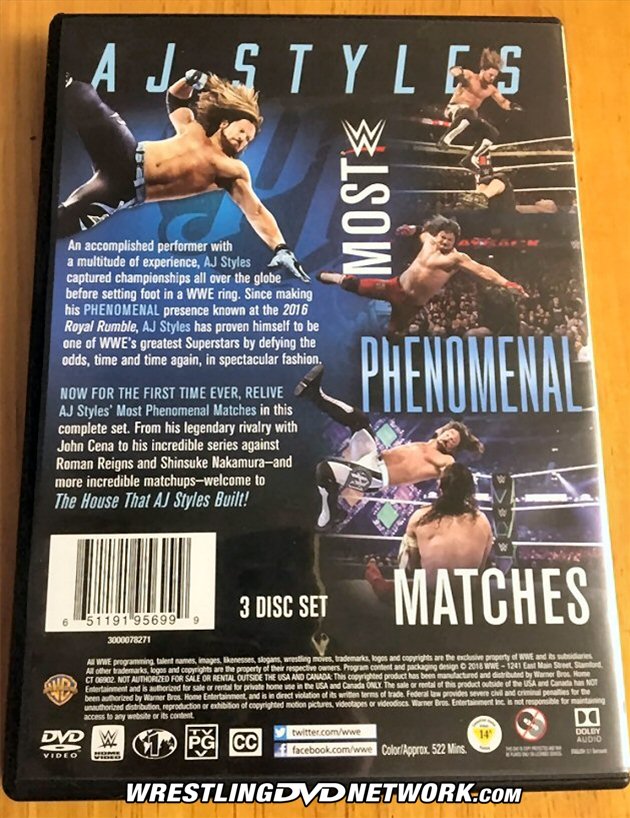 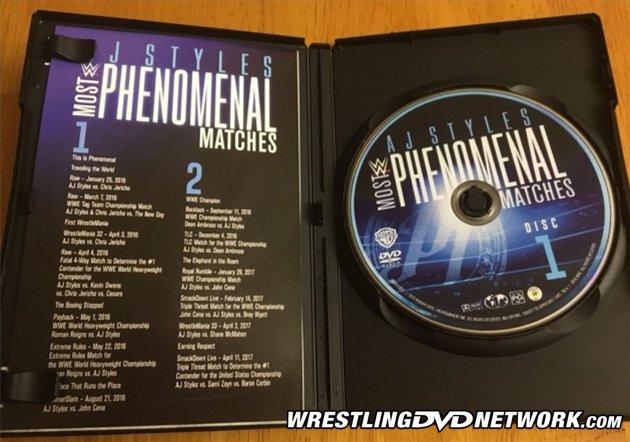 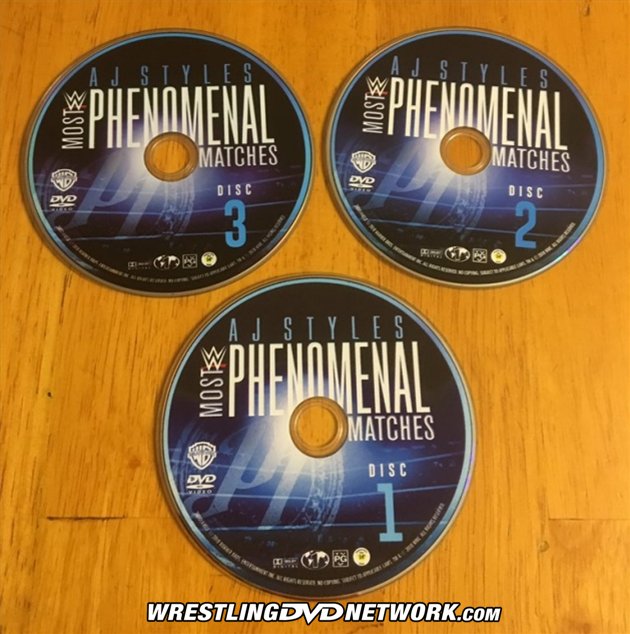 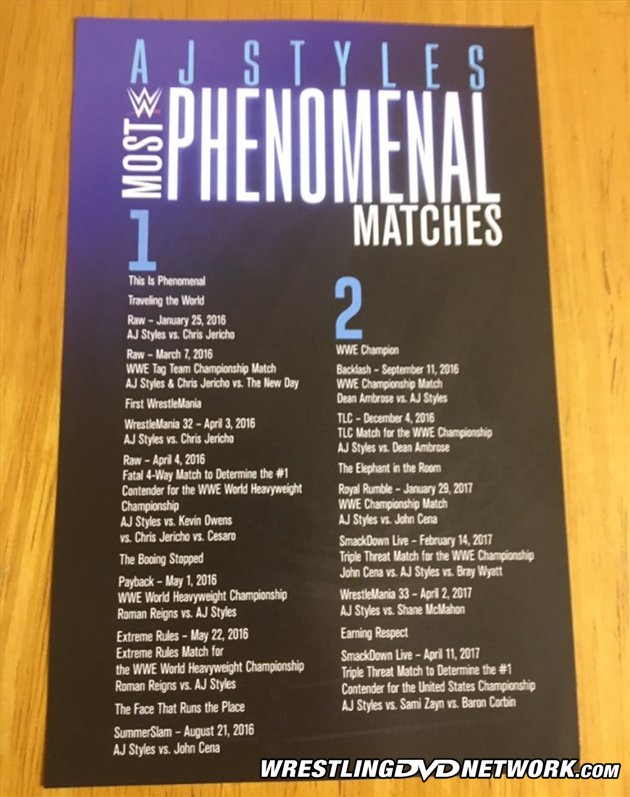 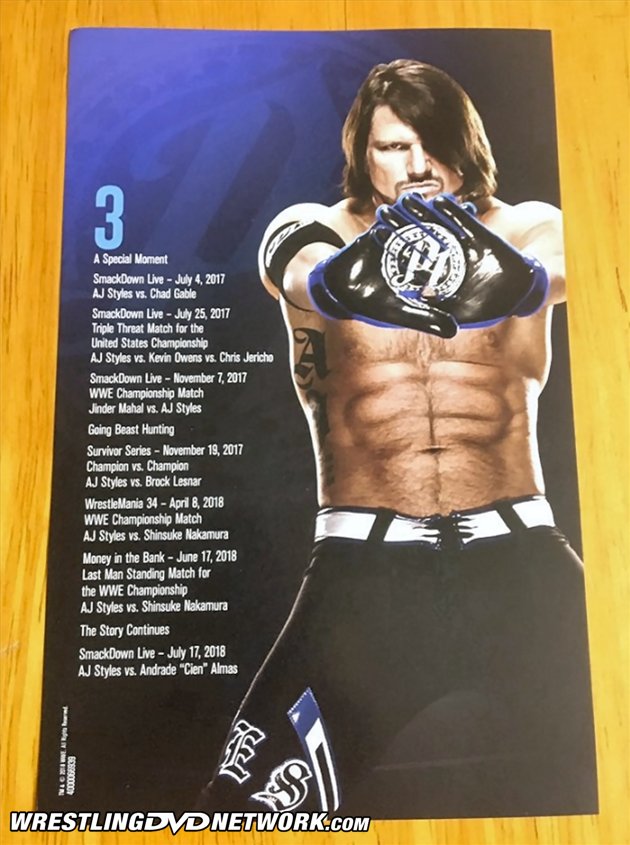