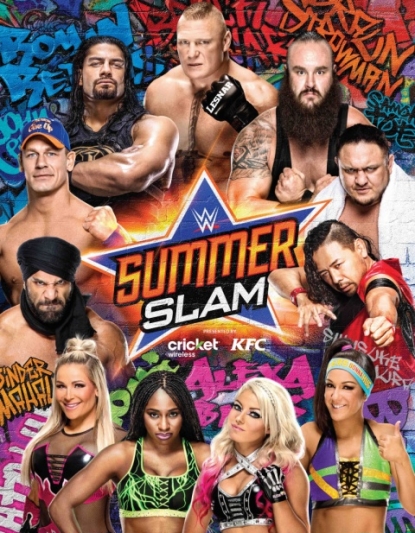 Earlier this week the news broke that SummerSlam 2017 will only be released on DVD, not Blu-ray, when an updated schedule was published here at WrestlingDVDNetwork.com.

Since then the official WWE Home Video licensee in the UK has issued a statement on the matter. The statement confirms that plan to produce this year’s SummerSlam as a DVD-only title.

While a Blu-ray edition appears to have been in the works at one point, we can now consider it cancelled as the social media notice reiterates our earlier report that a SummerSlam 2017 Blu-ray will not be offered in any region; be that the United States, Canada, UK or Australia.

WWE’s run of SummerSlam Blu-ray releases in the United States is not unblemished (you may recall the 2011 edition was cancelled last minute), however since then the event has always made it to the format, and by our count the UK has had a SummerSlam Blu-ray offering every year since 2009.

The update from WWE Home Video UK follows below:

We’ve had some questions regarding SummerSlam – which is now up for pre-order, and as some of you have noticed, is only on DVD.

Despite original plans to release SummerSlam in both DVD & Blu-ray, plans have unfortunately changed.

The overall market for Blu-ray is declining greater than that of DVD and quite rapidly in some territories, where retailers are simply not backing the format.

Blu-ray is expensive to produce and manufacture (much more than DVD) and we are regrettably unable to release titles on formats where decreased sales volumes mean we lose money.

In a difficult physical entertainment market, we need to run a profitable business in order to maintain our WWE license and keep releasing 12 x PPVs and 12 x non-PPV titles to fans every year.

Like WWE/ Warner in the U.S., E1 in Canada, and Madman in Australia, it is with regret that we are unable to release SummerSlam 2017 on the Blu-ray format.

We’re sorry to disappoint in this instance.

The Great Balls of Fire PPV and last Sunday’s Battleground PPV will be a tag team in WWE’s next “Double Feature” pack that’s scheduled to release to fans this time next month.

We can now unveil the artwork planned for the two disc set!

The cover of “Double Feature: Great Balls of Fire & Battleground 2017” will feature Brock Lesnar and Samoa Joe on the RAW side; Jinder Mahal and Randy Orton on the SmackDown Live side. 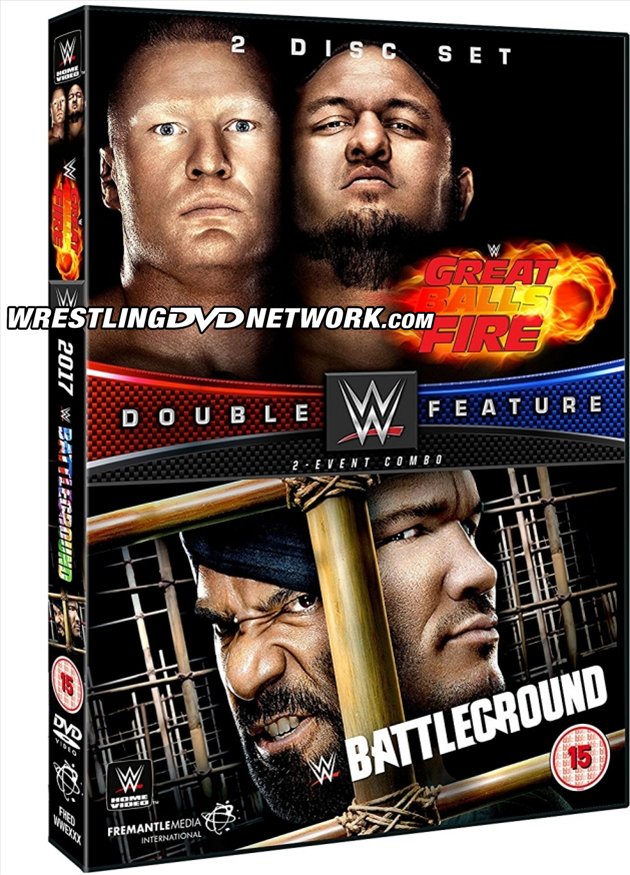 Speaking of the “Double Features”, the newly-released Extreme Rules & Money in the Bank 2017 DVD had an Amazon exclusive in Canada. It comes packed with another of the WWE collectible coins needed to fill the display case that was bundled with the WrestleMania 33 DVD.

You’ll recall that the first coin featured The Undertaker. This time the coin is Money in the Bank-themed and features Dean Ambrose who was a MITB Ladder Match winner back in 2016. 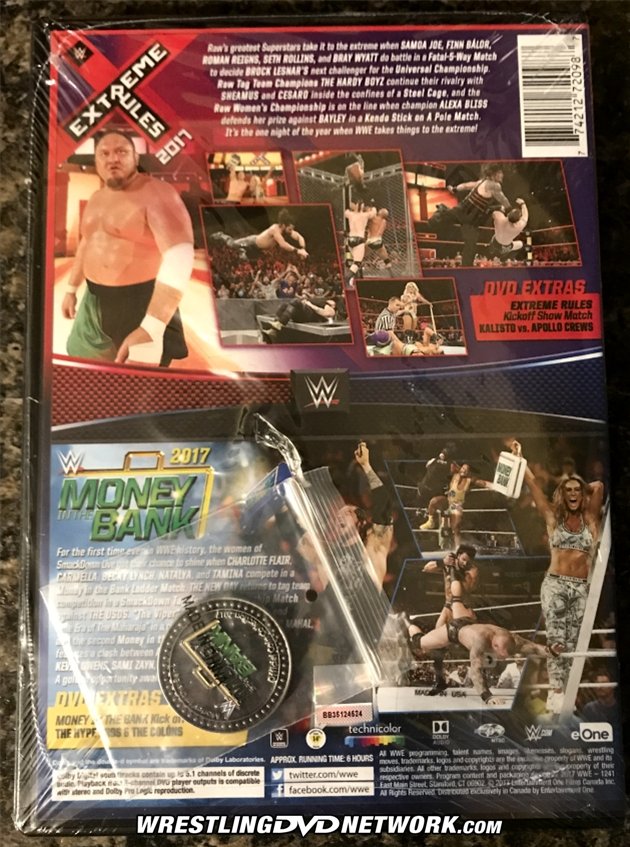 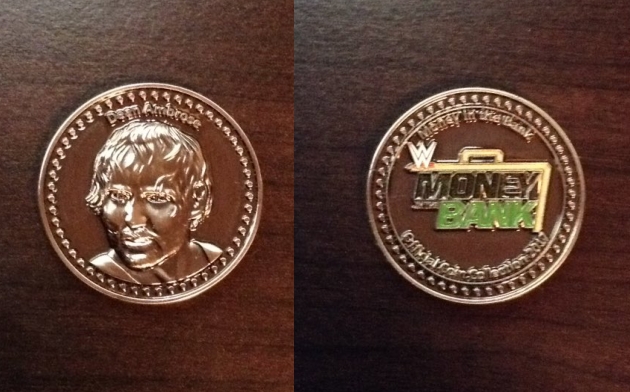 Picking up Amazon exclusive SummerSlam and Survivor Series DVDs will complete the collection!

Thanks to WDN readers Jordan and Jeffrey for giving us a first look. 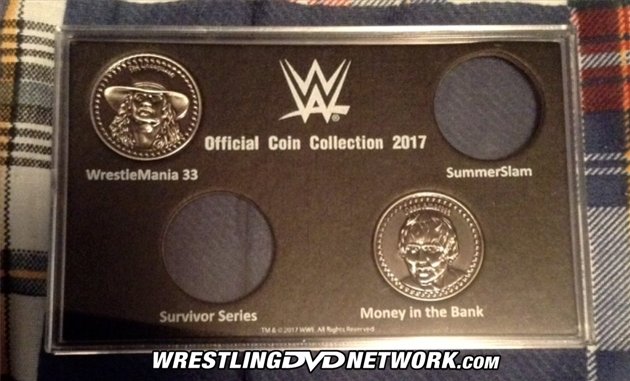 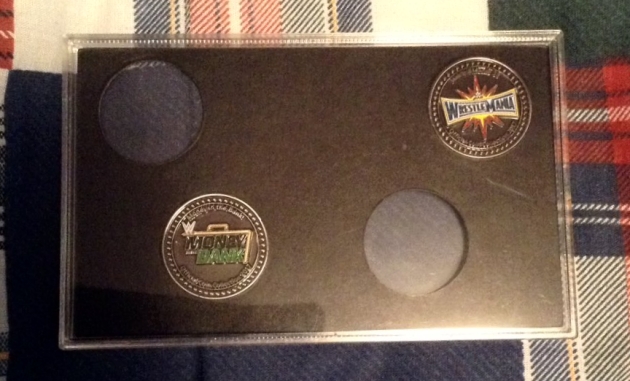 A new WWE DVD is about to hit stores; “Kurt Angle: The Essential Collection” will officially release to United Kingdom on Monday and to the United States on Tuesday! Get your copy.

If our in-depth review of the Kurt Angle DVD yesterday didn’t entice you, perhaps this new clip might which previews the 30 minute Iron Man Match with Shawn Michaels, featured in the compilation:

Angle’s “Essential Collection” and this year’s SummerSlam may not be on Blu-ray but so many past favorites did hit the format. Before the week is out all of the WWE Blu-rays linked to below will be auctioned off cheap on eBay — why not grab a few missing from your collection? 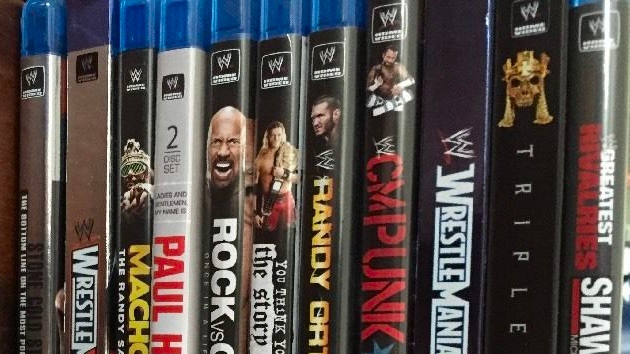