WrestlingDVDNetwork.com has your exclusive first look at the cover artwork for WWE’s 2017 “NXT: From Secret to Sensation” DVD!

While this reveal certainly is official, only a low quality shot of the cover (below) is available right now. As such there might be some tweaks made soon, so consider it a first draft. 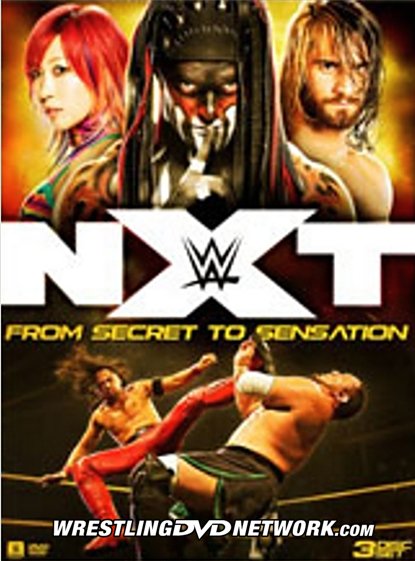 As of today product listings have surfaced here on Amazon.com where fans in the United States will be able to pre-order soon, while fans in the UK can already reserve a copy through Amazon.co.uk.

“NXT: From Secret to Sensation” is incoming as both a 3-disc DVD and a 2-disc Blu-ray collection. The documentary-led set now has a confirmed release date of November 14th. That documentary will explore the history of NXT and reportedly count down the 25 greatest Superstars to pass through the developmental brand. Expect to see a slew of bonus matches included too.

There were rumblings of a box set also in the works for this title; a “Giftset” which would include the DVD and presumably some exclusive NXT merchandise. This version has been referenced in official information for the first time this week, however doesn’t appear in Amazon’s listings.

We suspect that details are still be being finalized on the Giftset; it could even be a store exclusive.

Along with NXT more Home Video release dates have been revealed for November 2017!

The new dates have been added to our WWE DVD Release Dates page which now lists all upcoming titles that are confirmed on the way in the U.S. from August to the end of November.