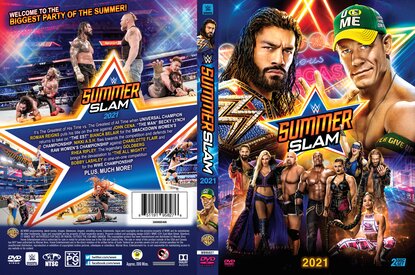 Yesterday came the list of SummerSlam 2021 DVD extras (including some key build-up moments from RAW and SmackDown episodes leading into the show), and following swiftly on today is the official unveiling of the cover artwork!

On the front cover you can expect to see a take on the event poster featuring John Cena and Roman Reigns, now with a number of Superstars added with them, from Seth Rollins to Goldberg to Bianca Belair. The back cover brings together several shots of the action from the evening, including one from the final moments of the PPV where Brock Lesnar made his return to WWE.

Heads up, as of today the SummerSlam 2021 DVD can now be pre-ordered in the United States by clicking here to Amazon.com. 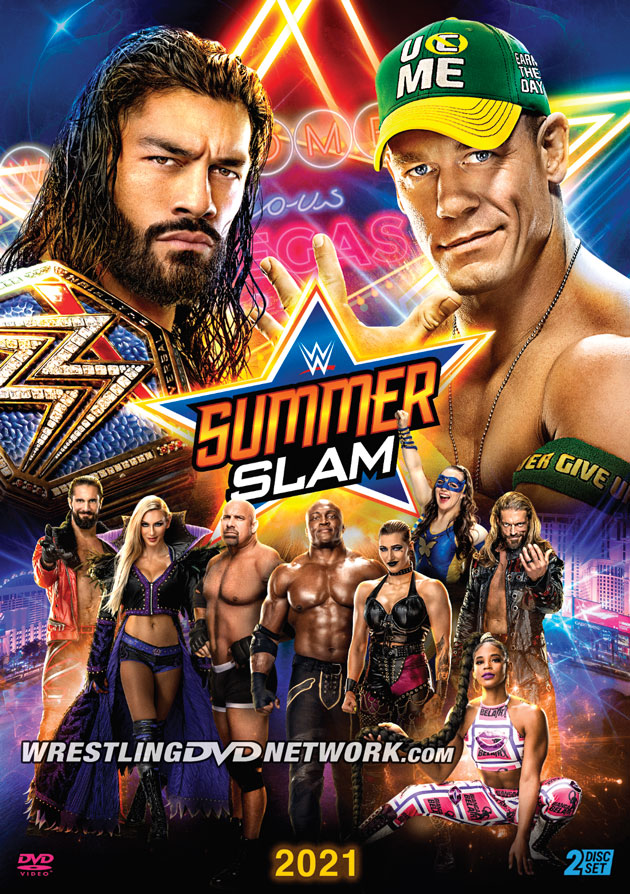 Welcome to The Biggest Party of the Summer!

It’s The Greatest of His Time vs. The Greatest of All Time when Universal Champion Roman Reigns puts his title on the line against John Cena. “The Man” Becky Lynch returns to take on “The EST” Bianca Belair for the SmackDown Women’s Championship.

Nikki A.S.H. flies towards the competition and defends her RAW Women’s Championship against Charlotte Flair and Rhea Ripley. The legendary Goldberg brings the devastation to “The All Mighty” Bobby Lashley in a one-on-one competition for the WWE Championship. 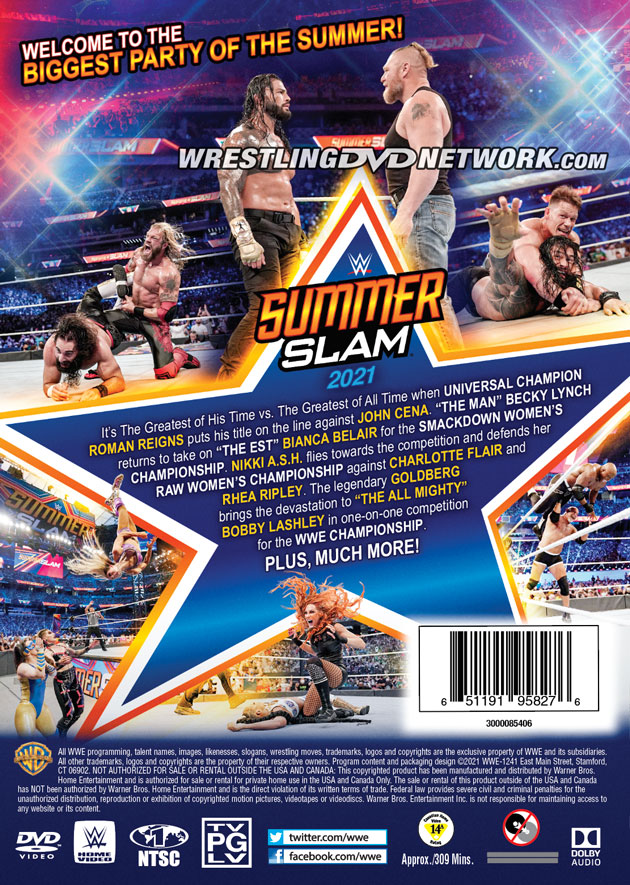 And there’s more artwork to show off!

Back in June, the UK’s WWE DVD licensee confirmed the go-ahead of “The Attitude Era WrestleMania Collection”, a 5-disc DVD box set that will combine the previous re-releases of WrestleMania 14, 15, 16 and 17 into one Attitude-filled collection.

Since then, Fremantle have been working with WWE to bring something special for the cover artwork, which has just been revealed today. The front cover will feature The Rock, Stone Cold Steve Austin, Mankind, Shawn Michaels, The Undetaker, Kane and Triple H in front of a fiery backdrop. The set will have new packaging too, so the 5 discs will be together in one case, rather than just presenting the packaging of the individual titles as they were released before. 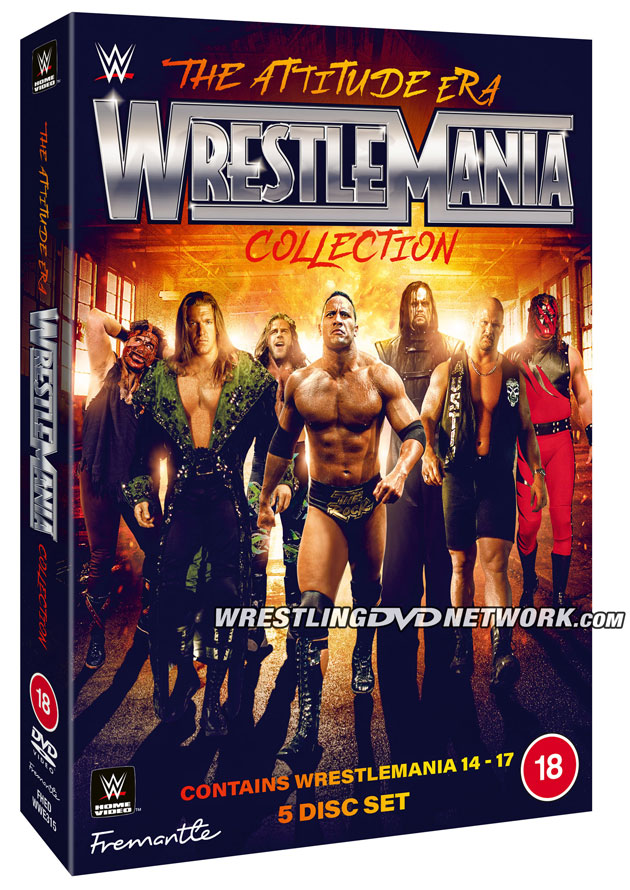 In this set highlighting every WrestleMania during WWE’s Attitude Era, you can now relive WrestleMania 14-17 (1998-2001) in this one-of-a-kind collection.

From the rise of Stone Cold Steve Austin to the sibling rivalry between Undertaker and Kane to legendary matches and moments featuring The Rock, Triple H, Mankind, Chyna, Trish Stratus, and more, this collection will take you back to one of the most in-your-face periods in WWE history. 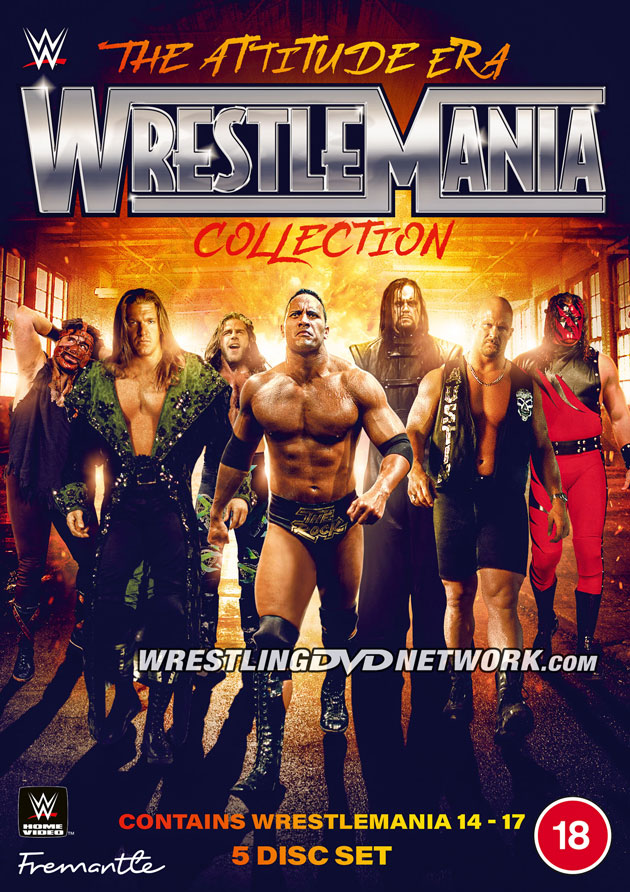 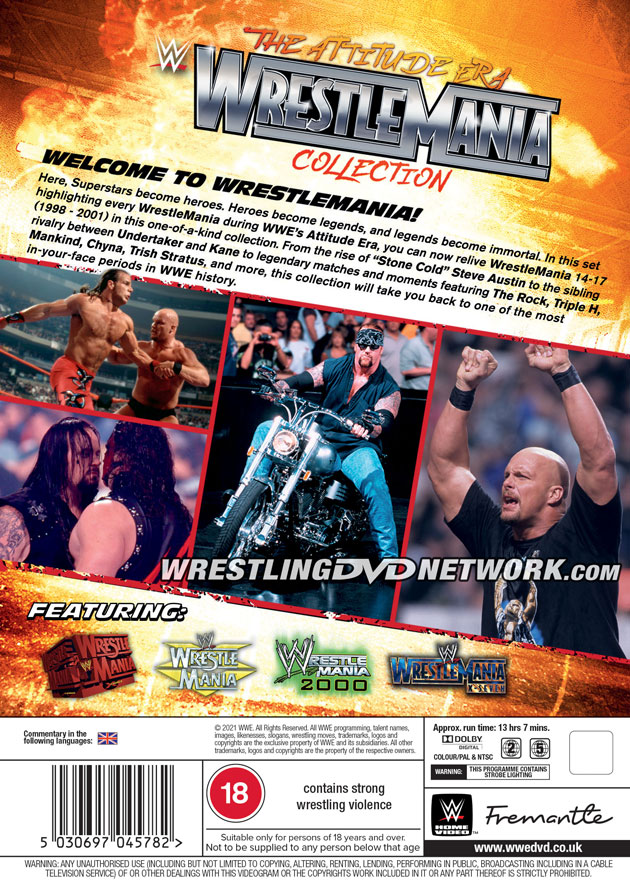 “The Attitude Era WrestleMania Collection” will be a UK exclusive, officially releasing to the region next month on September 27th. Amazon.co.uk has it available for pre-order now.

What do you think of the SummerSlam and “Attitude Era WrestleMania” artwork? Let us know in the comments section below!