DDP is back to host “The Very Best of WCW Monday Nitro Vol. 3” this month!

The new WWE DVD and Blu-ray set officially hits stores across the United States next Tuesday and in full will pack in almost 40 matches from the vault and additional segments on top.

Watch this exclusive first look preview clip as DDP returns with a BANG!

– Australia: Tomorrow! Get your copy from WWEDVD.com.au.

If you’ve not yet picked up “THE KLIQ RULES”, below to watch is an exclusive new clip of the documentary on the DVD/Blu-ray set – specifically a preview of the “Curtain Call” chapter.

As we reported, WWE reached out to Mani Mohtadi and Jason Cosmides for interview footage in the documentary, the two fans who captured the infamous moment on video back in 1996.

The new KLIQ DVD/Blu-ray is out now, here on Amazon.com and here on WWEShop.com.

Below is the trailer for the new DVD which contains the shows: “Wrestling’s Most… Creative Booker”, “…Iconic Champ”, and “…Shocking Heel Turn”. Season 3 is available to buy now at KayfabeCommentaries.com as a physical DVD or streaming instantly On Demand.

David Sinnott, producer of the wrestling documentary “Bloodstained Memoirs”, has shared the full Roddy Piper portion of that documentary following the news of his passing last week.

Still rocked by the news of the passing of Roddy Piper. I’ve decided to upload his entire scene from Bloodstained Memoirs for everybody to enjoy for free. Sales of related products tend to rise following the passing of a celebrity and I have no desire to profiteer from this awful news.

Perhaps just do me a favour and give a little something to your favourite charity in return for this. Failing that just tell somebody close to you that you love them. As we are too often reminded, tomorrow is never a guarantee. I had the pleasure of meeting Piper’s daughter at this film shoot and I can’t begin to imagine what she and her siblings are feeling right now.

My thoughts go out to them.

RARE STUFF: Look out for this lot of 10 WWE DVDs expiring in an eBay auction later today – including some rare titles like the Eddie Guerrero SmackDown tribute show and WWF DVDs like WrestleMania 15, King of the Ring 2000, and Invasion 2001. 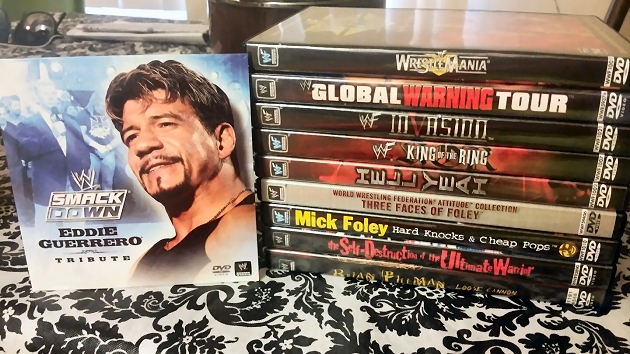 eBay seller “rendi13” is auctioning off more than 80 WWE Blu-ray titles on eBay tomorrow, and some out-of-print WWF/WWE DVD goodies too, such as the following: