Revealed here at WWEDVD.co.uk are the planned extras for Royal Rumble 2014, including Batista’s return to WWE!

Royal Rumble hits stores across the United States next month. You can pre-order a DVD copy with Amazon for $17.94 by clicking here. A Blu-ray version is scheduled.

The full extras list follows below and features the WWE Tag Team Championship match from the Kickoff show, an exclusive interview with Batista and 6 bonus segments exclusive to the Blu-ray edition, including Batista’s RAW return from earlier this month.

– WWE Superstars Draw Their Numbers for the Royal Rumble

– An Exclusive Interview with Batista

Royal Rumble 2014 will be released on Tuesday, February 25th (pre-order yours here).

The DVD and Blu-ray will be released to fans in Australia on March 5th, and following that it hits the UK and Europe on April 14th when ordering through WWEDVD.co.uk.

The Shawn Michaels “Mr. WrestleMania” DVD has now been added here to WWEShop.com for pre-order. As reported, that’s the big release of next month along with Royal Rumble.

Also on WWEShop today is a sale on DVDs and Blu-rays which runs through the weekend.

Click here to find these deals and the new HBK DVD at WWEShop.com. 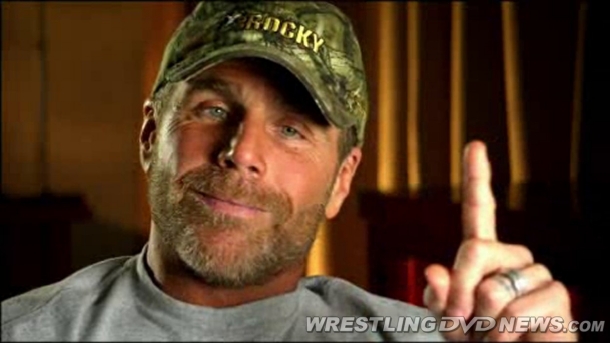 Below is a new preview clip of “Mid-Atlantic Memories“. We hear that the DVD will released in the summer, likely in August to coincide with the Mid-Atlantic Fanfest events.