Final Round of ‘March Mania’ Tournament – Which 2 WWE DVDs Made It?

We’re about to enter the final round of our first ever WrestlingDVDNews.com March Mania Tournament!

Before we get into the results of the semi-final and the voting for the final, let’s take a look at the journey that “RAW 20th Anniversary Collection”, “The Rise & Fall of ECW”, “WrestleMania X-Seven” and” Bret Hart – Best There Is, Best There Was and Best There Ever Will Be” have taken from the opening round all the way up to the semi-finals…

The “RAW20” box set fought off stiff competition like Ric Flair: Ultimate Collection and The Monday Night War. The Rise & Fall of ECW proved to be more popular than both Ric Flair: Definitive Collection and Stone Cold: The Bottom Line.

WrestleMania 17 took down the likes of Clash of the Champions and Chris Jericho: Breaking the Code. The Bret Hart DVD executed The Rise and Fall of WCW and Shawn vs. Bret!

The semi-final of the tournament received a record number of votes, so a huge thank you to everyone who took the time to cast their votes! The semi-final was really tough and went back and forth between all of the sets, however you guys and girls determined that RAW 20th Anniversary Collection and WrestleMania X-Seven would NOT make it to our finals. As you can see below, voting was incredibly tight in this round! 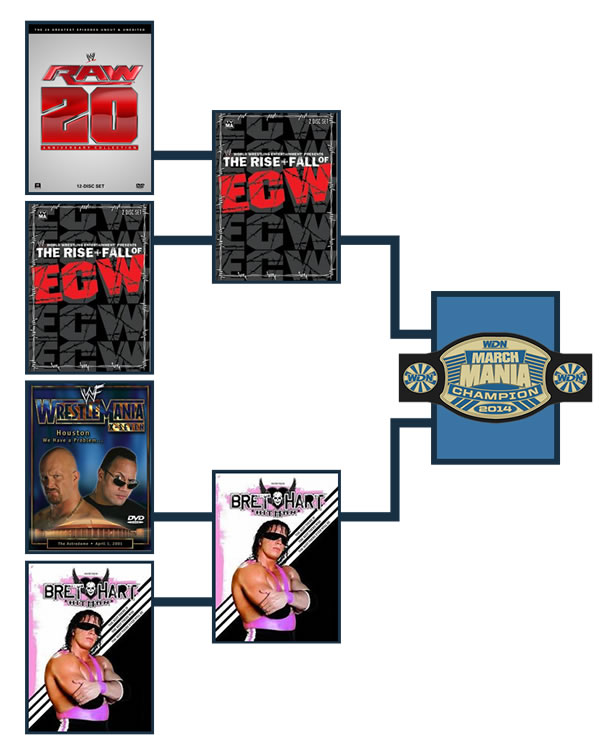 We move on to our final and it is the battle of the documentaries: Bret “Hitman” Hart vs. Extreme Championship Wrestling! So for the very last time; which is the greatest WWE DVD…