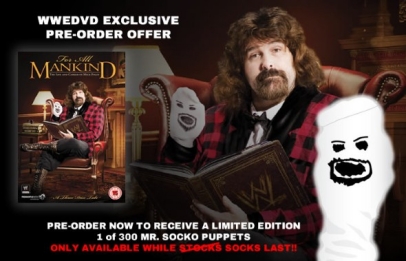 WWEDVD are delighted to announce that the first 300 fans to pre-order Mick Foley’s new DVD or Blu-ray from WWEDVD.co.uk will receive a FREE Mr. Socko glove puppet!

Just click to pre-order FOR ALL MANKIND: THE LIFE & CAREER OF MICK FOLEY which will be released on Monday 22nd April and is timed to coincide with Mick’s ‘Tales From Wrestling Past UK Tour’ which begins in Edinburgh on Wednesday 24th April and runs for 18 dates until Sunday 12th May.

Mr. Socko is strictly limited to 300 and is only available while stocks socks last!!

FremantleMedia today confirmed that once they have reached the 300 pre-order limit (whether DVD or Blu-ray), all advertising of the free Mr.Socko will disappear. If you place your order while “Free Mr.Socko” is included in the title, then that’s the indication you will have successfully gained the limited pre-order bonus.

As revealed yesterday, for the US market Amazon.com is currently where you can pre-order the Mr. Socko version of the Mick Foley DVD and Blu-ray. The two product listings have had “Limited edition premium packs” added to their titles. These are said to be while supplies last so those two extra listings will likely be removed when the pre-order limits are filled.

“For All Mankind” hits stores on April 16th and includes a 2 hour+ documentary main feature.

According to our information the bonus is also planned for the Australian market, but further details are yet to be revealed. Keep an eye on WWEDVD.com.au for that info.