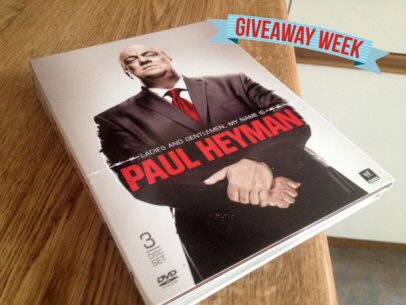 Our Giveaway Week continues on today and gives you the chance to win the new “Ladies and Gentleman, My Name is Paul Heyman” DVD!

1) Sign up for our free email notifications by entering your email address in the box below. This is to receive digests of our latest news updates so you never miss out.

2) Next, check your email inbox at the address you specified for a verification email. In there will be a link to click to confirm the sign up. This is an important step because only confirmed email addresses receiving our updates will be counted for the giveaway.

3) Enjoy the news digests and the chance to win the Paul Heyman DVD – you will contacted at the same email address tomorrow if you are the lucky winner!

We can now exclusively reveal 5 of the matches to be featured on “True Giants”.

The new WWE DVD and Blu-ray set will release to both North America and UK/Europe in December, then will follow on to fans in Australia in January.

Kayfabe Commentaries will release the “YouShoot: Teddy Long” DVD this coming Tuesday. They have also announced that Alberto Del Rio will be featured in a future YouShoot interview. You can submit questions for Del Rio at KayfabeCommentaries.com.

YOUSHOOT is returning with Alberto Rodriguez who worked on WWE TV as Alberto Del Rio!

This former WWE Superstar has taken the YOUSHOOT oath and agreed to answer anything! While some fans want to know the details about his recent departure from the federation, here is the opportunity to ask him anything about his lengthy run in Mexico, to his MMA career, to his being in one of wrestling’s most famous families to…well ANYTHING YOU CAN THINK OF! Get creative Kayfabe Commandos!

The first installment of Kayfabe Commentaries’ “Back to the Territories” series is due for release on November 25th. The series is hosted by Jim Cornette and the first featured guest will be “Hacksaw” Jim Duggan who will be talking about Mid-South Wrestling.

A new offer has launched at WWEDVD.co.uk for fans in the UK and Europe – get The Attitude Era DVD and any 2 of these selected 3-disc DVD sets for only £25 total. Add all 3 titles to your basket and enter the code “HELLYEAH” at checkout.

WDN reader Randy Dee sends word that the “Best of WCW Clash of the Champions” DVD is down in price to just $5.00 right now, here on Amazon.com.