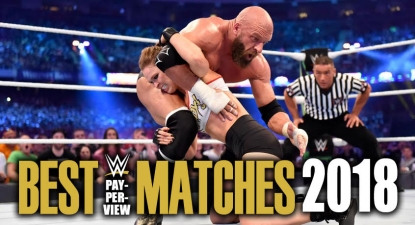 Our last update gave you a look at the official cover artwork for WWE’s first 3-disc DVD set coming next year. Since then, WWE Home Video UK have let loose its entire list of matches!

“Best Pay-Per-View Matches 2018” will mark the ninth Home Video release in the long-running WWE PPV-themed series with the latest installment presenting 16 of the year’s greatest matches and this time, a complete Royal Rumble match be joining all of that content.

The men’s Royal Rumble match from the Rumble 2018 event will be joined by the women’s Money in the Bank Ladder Match from MITB, along with memorable matches the likes of Daniel Bryan vs. The Miz from SummerSlam, Jeff Hardy vs. Randy Orton from Hell in a Cell, and Becky Lynch vs. Charlotte Flair from Evolution last month – and that’s only scratching the surface; WrestlingDVDNetwork.com has the complete disc-by-disc listing below.

The “Best Pay-Per-View Matches 2018” DVD will soon be listed for pre-order through Amazon.com and has already been put up for pre-order in the United Kingdom here on Amazon.co.uk.

Welcome to the Splendor

No Fear of Missing Out

Intercontinental Championship Match
Seth Rollins vs. The Miz
Backlash • May 06, 2018

A Chance to Reinvent

No Signs of Slowing Down