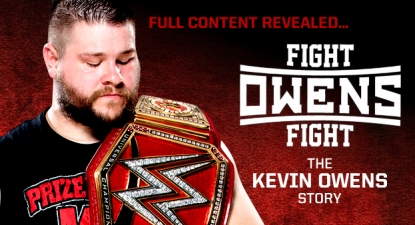 “The List of KO” is about to make a comeback as WrestlingDVDNetwork.com reveals the full content WWE has in store for their 2017 DVD and Blu-ray release on Kevin Owens!

We’ve got an exclusive first look at the listing for “Fight Owens Fight – The Kevin Owens Story”: a 14-chapter documentary, 13 extras including “deleted scenes” from the documentary (and a few bonuses from the WWE Network), on top of a collection of 17 of KO’s best matches and moments to date, beginning with his NXT debut in 2014 through to WrestleMania 33 this year.

And we hear there’s a hidden “Easter Egg” buried somewhere in here which is yet to be found.

Heads up, the KO-compilation has now been given an official release date of July 4th, 2017 in the United States and is expected one day earlier in the United Kingdom! This week the DVD was listed here on Amazon.com and the Blu-ray here, with pre-order opportunities expected shortly.