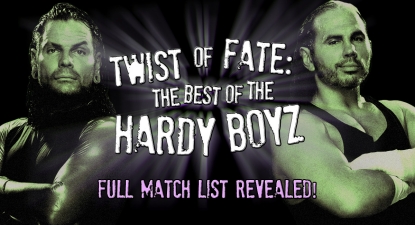 It’s Monday and WrestlingDVDNetwork.com has been WOKEN once again with a WONDERFUL new WWE DVD content listing!

We can exclusively reveal that “Twist of Fate: The Best of the Hardy Boyz”, a 3-disc DVD set scheduled for release by the company this May, will collect together a total of 27 matches that span the entire WWE careers of Matt and Jeff Hardy. The selections begin in 1996 (two years before the brothers would sign a full-time contract with WWE) and journey right through to the Hardy’s latest run with WWE which kicked off with a surprise return at WrestleMania, also featured here.

Joining classic tag team matches, singles bouts (including a few matches against each other!) and milestone moments handpicked from the Hardy’s over 20-year career will be newly-filmed segments with Matt and Jeff captured by WWE cameras late last year.

The full list of chapters follows below — what do you think; does it make WWE’s previously released Hardy Boyz DVDs (one of which had a similar name) OBSOLETE?! Leave us your comments.

The Famous Ring in the Woods

The New Rockers vs. The Hardy Brothers
Superstars • June 1, 1996

TLC Match for the WWE Tag Team Championship
The Hardy Boyz vs. Edge & Christian vs. The Dudley Boyz
SummerSlam • August 27, 2000

You Know You’ve Made It

Back Together Once Again

Enzo Amore Opens Up On His WWE Release