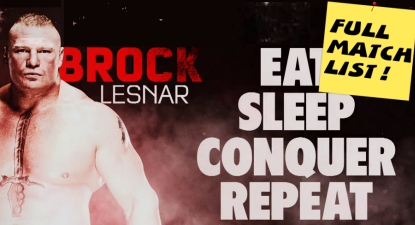 In another WrestlingDVDNetwork.com exclusive, we’ve got our hands on the full match listing for the 2016 Brock Lesnar WWE DVD before it even goes live for pre-order anywhere!

“Brock Lesnar – Eat. Sleep. Conquer. Repeat.” will hit stores in October on DVD, Blu-ray and Steelbook Blu-ray. As announced in the trailer, the DVD will feature 14 “monstrous matches” and today we can name exactly what those are — Brock’s biggest matches since his return in 2012, coupled with a few classic (and unseen) matches from his original run in OVW and WWE.

Joining those will be new video packages (most likely involving “The Beast” himself), telling you the story of Lesnar’s entire career as you take a journey of your own to “Suplex City”…

“The Best” vs. “The Beast” in a No Disqualification Match
CM Punk vs. Brock Lesnar
SummerSlam • August 18, 2013