It’s the official release date of “Undertaker: The Last Ride” on DVD in the United States! Today, Walmart release their exclusive with alternate artwork and a mini comic-book!

It’s a double celebration because not only is “The Last Ride” beginning to hit stores, here at WrestlingDVDNetwork.com we’ve received the Blu-ray edition and we’re giving it away FOR FREE!

The giveaway is happening on our Facebook page where we’ve just hit 20k Likes. Thanks, WDN readers! If you haven’t Liked us there, we wouldn’t mind a few more.

Enter the giveaway before Thursday: 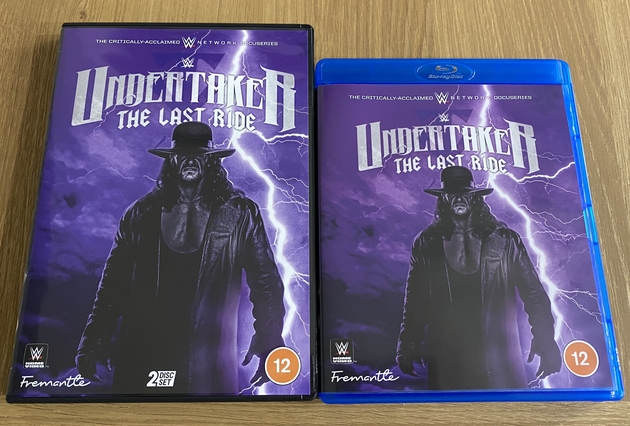 The UK release of “Undertaker: The Last Ride” (DVD, Blu-ray and Collector’s Edition Blu-ray) is on the way for next Monday. Before then, we’ve got some exclusive first look photos to show you!

Check out the finished product for both the DVD and the Blu-ray, on hand in the UK. 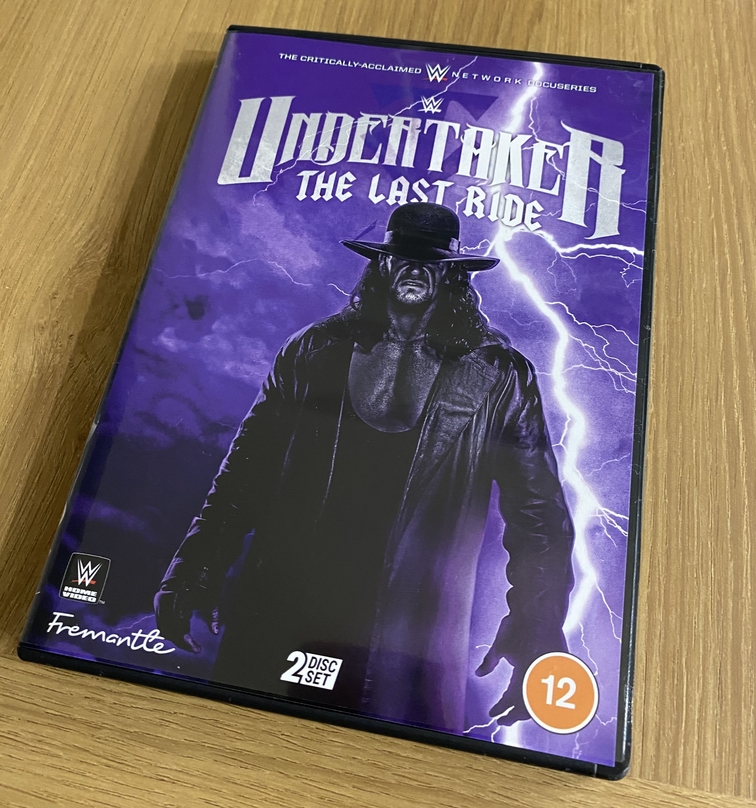 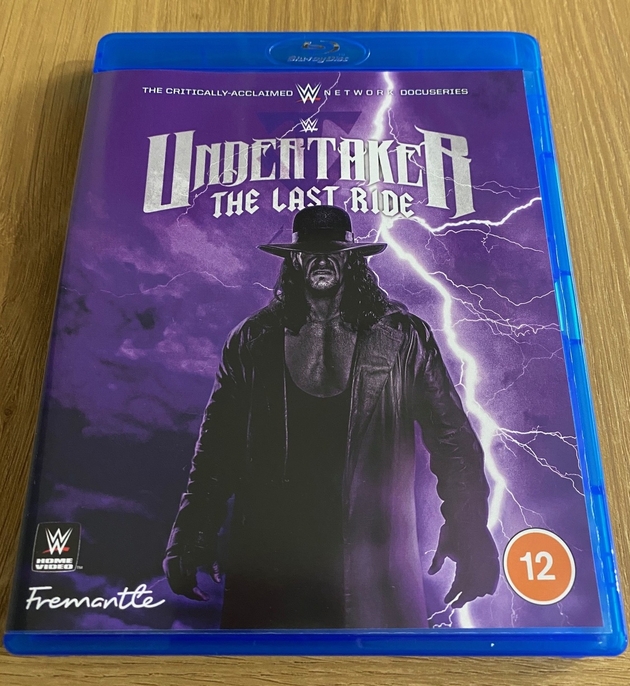 For the first time ever, Mark Calaway, the man behind The Deadman, comes out of the darkness and sits down with WWE Network for Undertaker: The Last Ride.

In this critically acclaimed 5-part docuseries, WWE follows The Phenom on his emotional journey towards having one last great match and putting the final nail in the coffin of his legendary career.

“Tales from the Deadman” bonus episode 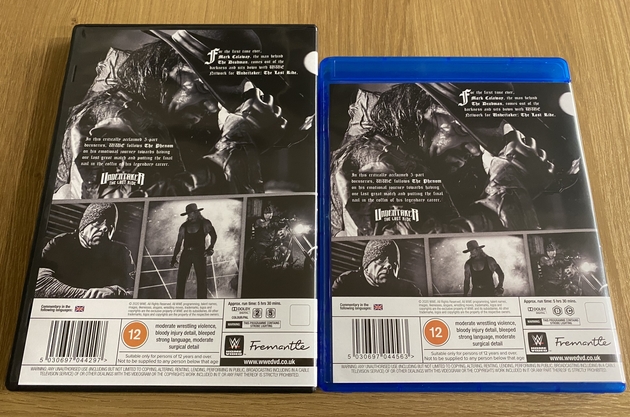 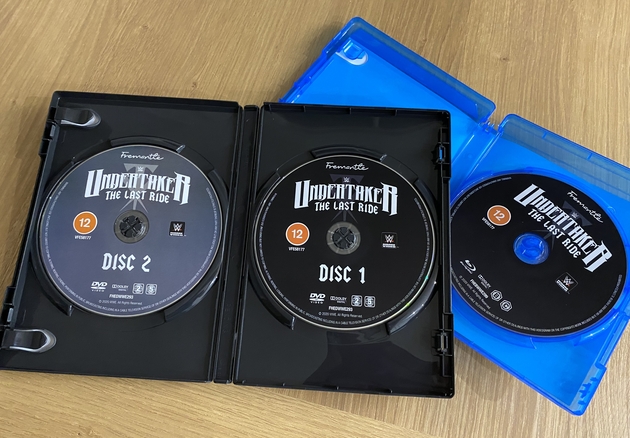 Get your hands on WWE’s “UNDERTAKER: THE LAST RIDE” DVD…

– UK/Europe: November 23rd. You can pre-order the DVD (or Blu-ray) here on Amazon.co.uk. 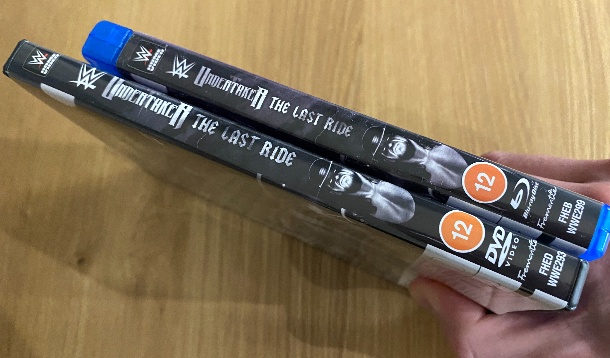 As WrestlingDVDNetwork.com exclusively revealed, this title is scheduled to be the first WWE DVD of 2021 and is set to include the documentaries “R-Truth”, “Edge: The Second Mountain”, “WrestleMania: The Show Must Go On” and “Drew McIntyre: The Chosen One”.

Fans in the United States can add this 2-disc set to their DVD collections from January 12th, 2021. Release dates to other regions are yet to be announced. 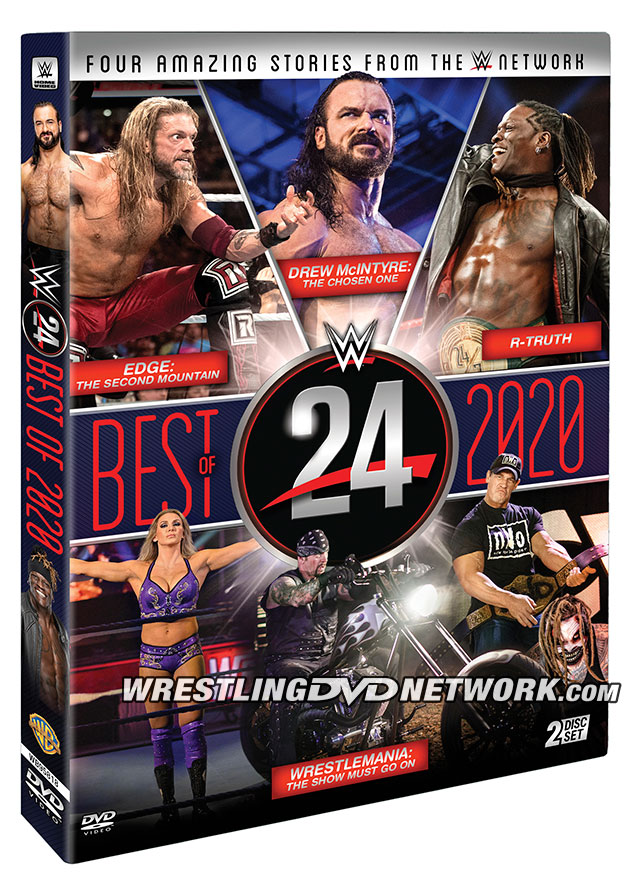 Experience the rollercoaster ride of a WWE Superstar’s career with WWE 24: The Best of 2020.

Follow Edge’s tumultuous journey back to WWE, learn about the life of the always entertaining R-Truth, witness the incredible comeback story of Drew McIntyre, and get a peek behind the curtain during the excitement and craziness of WrestleMania 36.

Witness the best stories of 2020 and see why WWE 24 is the best docuseries on WWE Network. 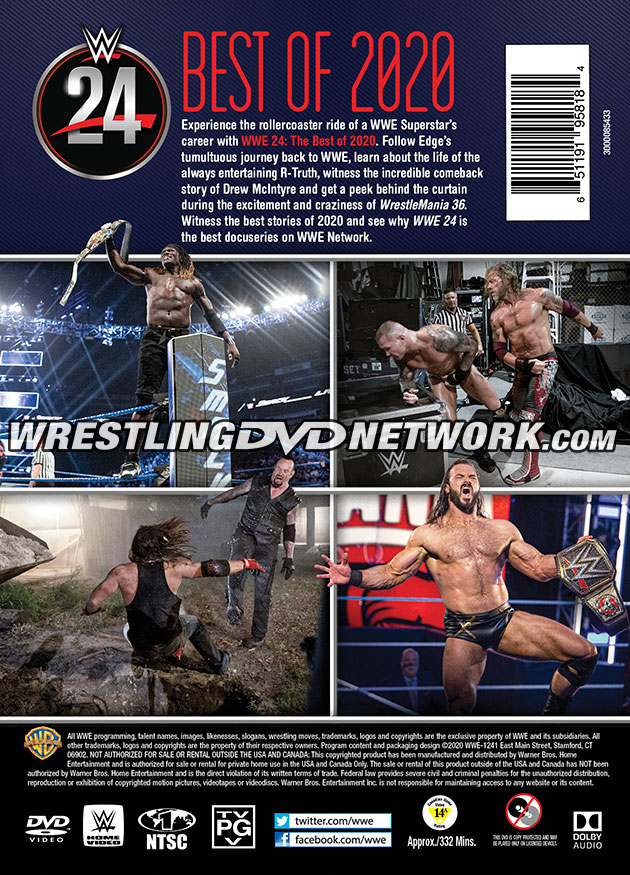 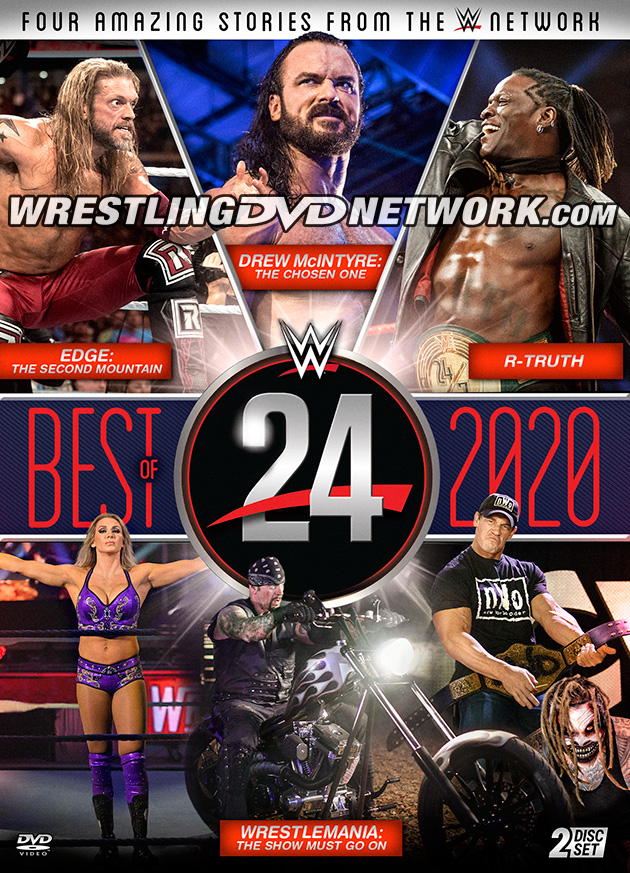 We’ve not quite had enough RUTHLESS… AGGRESSION, we still need to take a closer look!

YouTuber “Relaxing Ghost” gives us a video peek this month’s “Ruthless Aggression Vol. 1” DVD above, and WDN reader Kahikina Cazimero shares the collection of photos below.

You can grab a copy of the 2-disc DVD set by clicking here to Amazon.com, or if you’re in the UK, here on Amazon.co.uk. It’s out now! 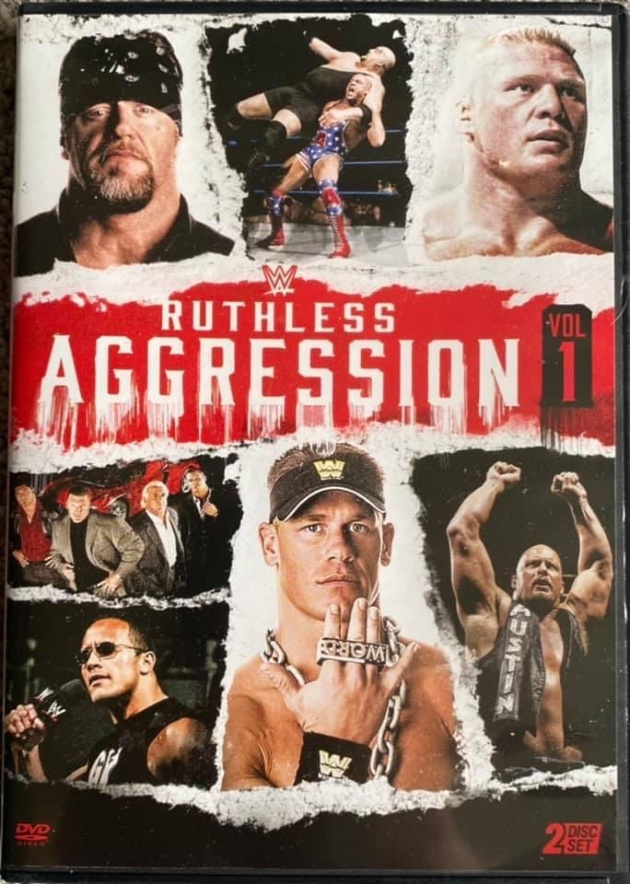 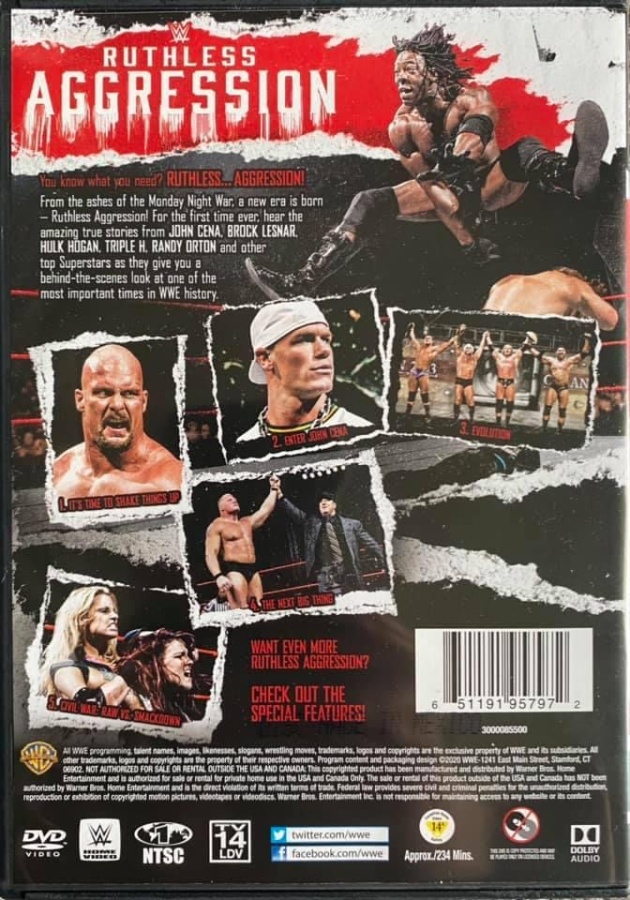 You know what you need? RUTHLESS… AGGRESSION!

From the ashes of the Monday Night War, a new era is born – Ruthless Aggression! For the first time ever, hear the amazing true stories from John Cena, Brock Lesnar, Hulk Hogan, Triple H, Randy Orton and other top Superstars as they give you a behind-the-scenes look at one of the most important times in WWE history.

Want even more Ruthless Aggression? Check out the special features! 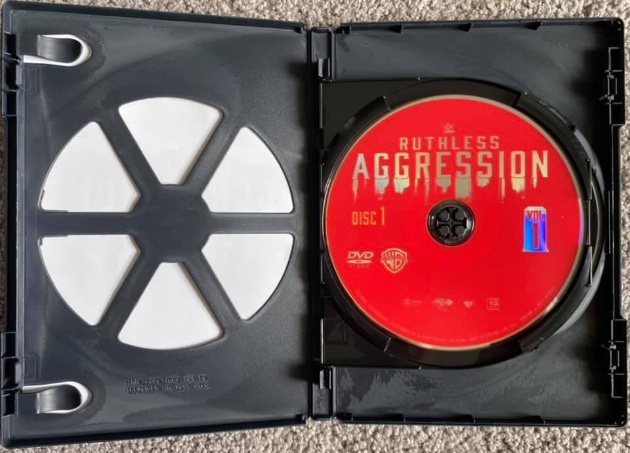 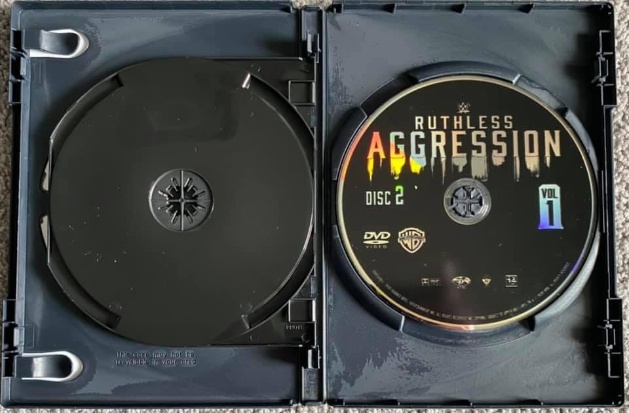 – UK/Europe: AVAILABLE NOW! Get some Ruthless Aggression now on Amazon.co.uk. 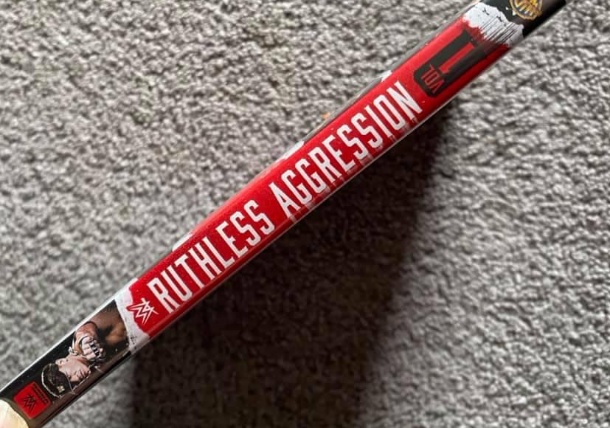