There is planned to be a Hell in a Cell 2013 Topps trading card included in this year’s DVD when released on November 25th. Below is the official synopsis. 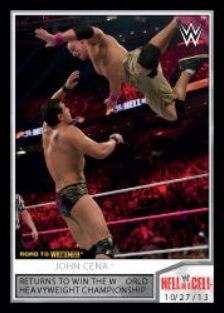 The 6th annual Hell in a Cell will take place on October 26 at the American Airlines Center in Dallas, TX. The concept is based on WWE’s Hell in a Cell match, which has taken place since October 1997 when Shawn Michaels defeated the Undertaker.

There looks to be very high demand for the new “Ladies and Gentleman, My Name is Paul Heyman” DVD. It’s currently back-ordered here on Amazon.com with a wait time of up to 2 weeks, but the price has dropped to $18.71 on DVD and $20.97 on Blu-ray.

Many WDN readers have had a hard time finding copies in store, particularly the Blu-ray version. Both the DVD and Blu-ray are in fact still in stock here on WWEShop.com if you’re looking for it online. You can get $5 off orders $30+ with promo code “DVDWWE5”.

Below is another WWE.com “online exclusive” video preview, hyping the Heyman DVD.

Below are the cheapest prices on eBay right now for the Paul Heyman DVD/Blu-ray!

As mentioned, FYE stores have several WWE Blu-rays marked down to $9.99 or less. With thanks to Michael Musick, we’re able to confirm 14 of the titles found so far.

Speaking of FYE, WDN reader “Jamyn1998” sent along the photo below of WWE DVD double packs on sale for $6.99 each, which may be new or at least marked down in price lately. 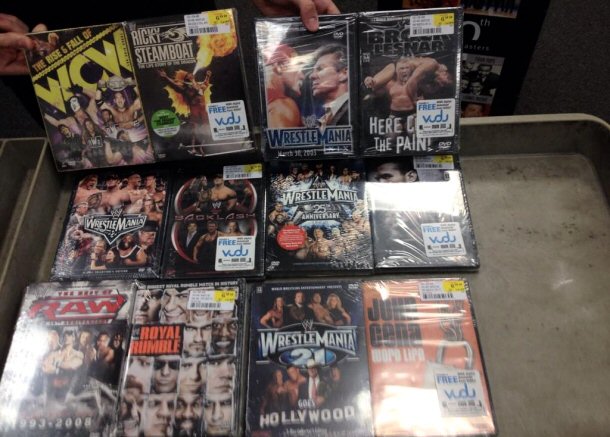 FremantleMedia (the UK licensee operating through WWEDVD.co.uk) will be re-releasing nearly 20 DVD/Blu-ray titles to the UK on August 18th. These were originally released by the previous UK distributor. Here’s a list, with thanks to WDN reader “Vintage Simon”.