The latest from FremantleMedia on the launch of WWEDVD.co.uk confirms they will launch the new website this week (expected Wednesday) and anybody who has registered already on the site will receive an email alert.

Update: These intended prices have now been dropped! Read the follow up article:
http://wrestlingdvdnews.com/fremantlemedia-drop-wwe-dvd-prices

Special promotions are being discussed internally for 2013, and they will have a Facebook and Twitter social media presence later in the year too.

According to the BBFC website, the following back catalogue titles are ready to be sold by FremantleMedia. Many others are expected at a later date.

Thanks to Josh and Stephen Galbraith for passing along this info.

Today is the last day to ‘Like’ our Facebook page (facebook.com/wwedvdnews) and be automatically entered into our latest WWE DVD & Blu-ray giveaway!

Below is the official synopsis promoting the Royal Rumble 2013 DVD and Blu-ray. 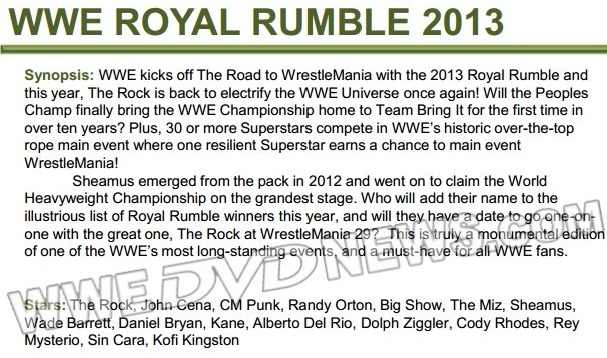 Pre-order the Royal Rumble 2013 DVD/Blu-ray for February by clicking here.

To celebrate tonight’s Raw 20th Anniversary episode, you can take 20% of all WWEShop orders $20 or more. Simply use code “RAW20” at checkout. Go to WWEShop.com.