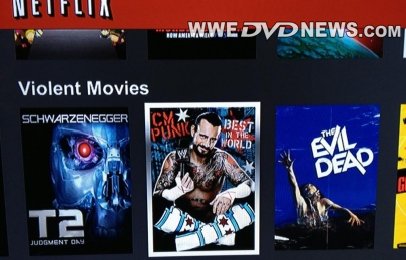 Here’s a full list of WWE DVD features and documentaries streaming now on Netflix Instant (US). Thanks to Mike Buzzard for contributing to the list, and if you spot anything missing just let us know in the comments section.

Click here to try out WWE streaming on Netflix for FREE!!

The latest digital news out of January 2013, brought to you by Roger Palmer.

– The WWE released Best PPV Matches 2012 digitally. The matches are discounted with a season price. Matches featured include the likes of CM Punk vs. Dolph Ziggler, Triple H vs. Undertaker, Rock vs. Cena, and Triple H vs. Brock Lesnar.

– As seen above, CM Punk’s “Best in the World” documentary was added to Netflix.

– WWE’s other big release of the month was The Best Of Raw & Smackdown 2012, which is spread across 3 volumes and is available on Xbox Live and soon to be on other platforms. Each volume represents a disc from the DVD package.

– WWE: The Attitude Era has also been released digitally in a season format which means each match is available to purchase individually, as well as the hour documentary.

– Looking at the new WWEDVD.co.uk website for the United Kingdom and Europe, the iTunes logo is displayed on every page which looks to be an indication that digital releases are going to be a major focus for FremantleMedia.

– Lastly, TNAondemand.com has added a number of videos to the service including many Asylum episodes up to episode 35, as well as the Turning Point 2012 PPV.