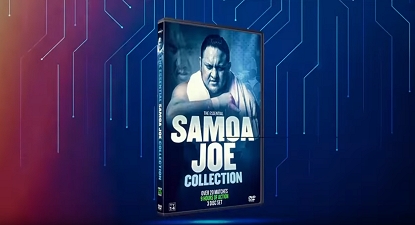 Toward the end of 2017 we heard rumblings of a TNA/IMPACT-produced Samoa Joe DVD slated to join the recently-released Superstar profiles on Booby Roode, Eric Young, and AJ Styles.

“The Essential Samoa Joe Collection”, a 3-disc DVD set, did wind up releasing to fans in the United States late last year and to Europe earlier this month. Official information confirmed 9 matches for the content, however if you’re curious about the full listing we can reveal it for you right now.

The new 9-hour compilation features a total of 23 matches from current WWE Superstar Samoa Joe’s decade-long tenure with TNA; from his debut match at Slammiversary 2005 shortly after signing a contract, right through to one of his final matches with the company at Bound for Glory 2014.

A special thanks to WDN reader Aaron W for sending word.

Samoa Joe vs. Christian Cage vs. Robert Roode vs. Booker T vs. Rhino, King of The Mountain Ladder Match for the World Heavyweight Championship – Slammiversary 2008

Samoa Joe vs. Mick Foley vs. Kurt Angle vs. Jeff Jarrett vs. AJ Styles, King of The Mountain Ladder Match for the World Heavyweight Championship – Slammiversary 2009

Samoa Joe and Jeff Jarrett vs. Kevin Nash and Sting – No Surrender 2010 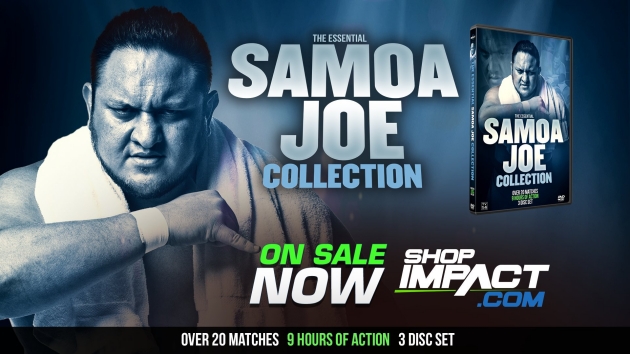 Following the recent release of Survivor Series 2017 on DVD in the United States, Canada and Australia, the PPV event is about to land on Blu-ray format for the first time!

One week from today Survivor Series will hit stores in the UK both on DVD and as an exclusive Blu-ray; grab it here on Amazon.co.uk.

It will feature the entire match card (headlined by AJ Styles vs. Brock Lesnar and the 5-on-5 RAW vs. SmackDown Live Survivor Series Elimination Match) as well as the Kickoff Show matches in the extras.

Here’s a pre-release glimpse of the Blu-ray’s main menu layout: 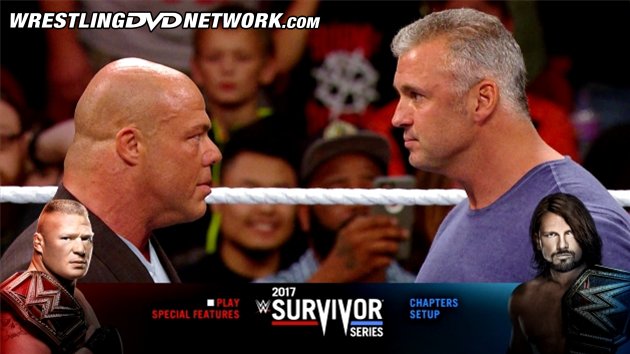 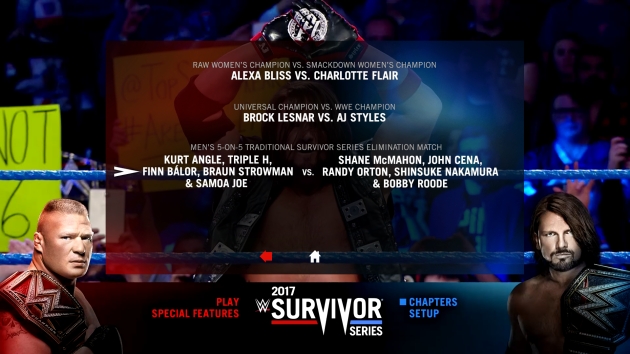 – UK/Europe: NEXT WEEK! Get your Survivor Series DVD (or the Blu-ray) on Amazon.co.uk.

Speaking of the Survivor Series DVD, an Amazon exclusive version of it has been released in Canada. It completes the “WWE: Official Coin Collection 2017” display case with a Survivor Series coin that features soon-to-be WWE Hall of Famer, Goldberg!

The coin collection (shown in its complete form below) has 4 coins – The Undertaker, Dean Ambrose, Finn Bálor, and Goldberg – all found in Amazon exclusive offerings of the WrestleMania 33 DVD, Money in the Bank 2017 DVD, SummerSlam 2017 DVD, and Survivor Series 2017 DVD.

Many thanks to WDN reader Jeffrey for the pics. 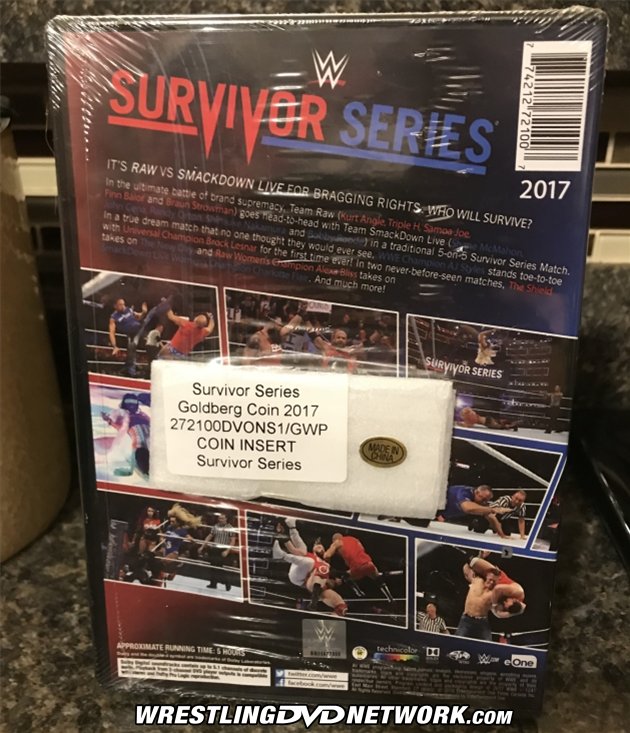 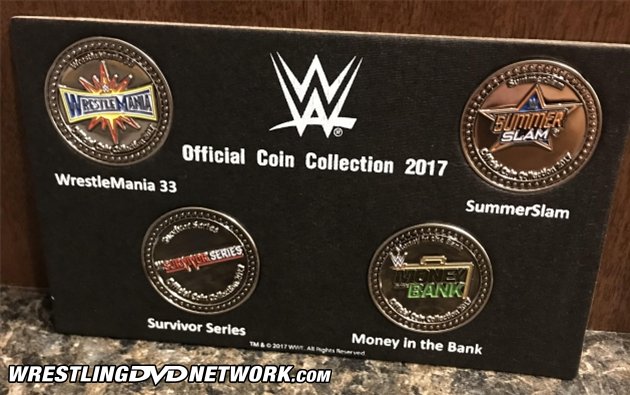 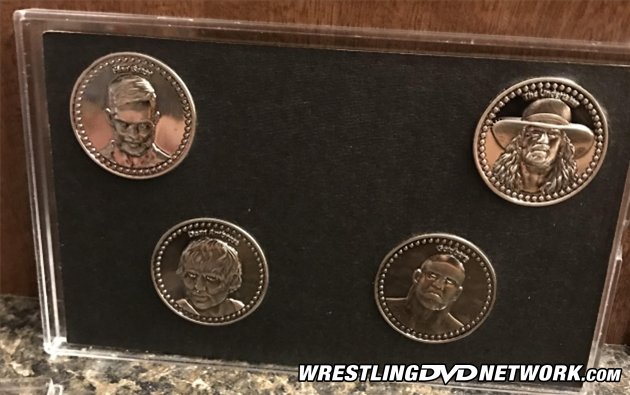 For those asking about the status of WWE’s 2018 Home Video releases, we would like to once again assure you that everything is going ahead as scheduled and as we’ve reported.

There has been–and still remains–an issue or delay with Amazon listing upcoming titles to purchase. This appears to only be affecting Amazon since other retail sites are selling the 2018 WWE DVDs as normal. The first release of the new year, “Best Pay-Per-View Matches 2017”, is available across the board and has just been listed by WWE themselves here on WWEShop.com.

From what we can gather the Amazon delay is a simple case of this retail site (and others like them) not receiving artwork for said missing DVDs because the domestic Home Video distributor has not yet uploaded it – and in the case of Amazon that tends to mean the product is not ‘live’ or shown publicly until the assets are available. It sounds to us like an issue that could be easily resolved soon.

Until then, a few of 2018 WWE DVDs can in fact be pre-ordered from Amazon already:

Clash of Champions 2017 is the next WWE DVD scheduled for release this year (out tomorrow), while we’ve received a synopsis for the “Double Feature: Elimination Chamber & Fastlane 2018” DVD that’s on the way in April. With that we also have word that WWE will be continuing to include collectible Topps trading cards inside the packaging of all PPV DVDs.

This two-disc set features WWE Superstars competing in the unforgiving steel prison known as the Elimination Chamber and getting in the Fastlane on the road to WrestleMania!

First up on our latest eBay Watch is this rather good deal on the brand new NXT DVD set!

These classic, original-print WWF DVDs are being auctioned off individually this week…

…and “LOTS” more rare WWF DVDs are up for grabs if you know where to look! 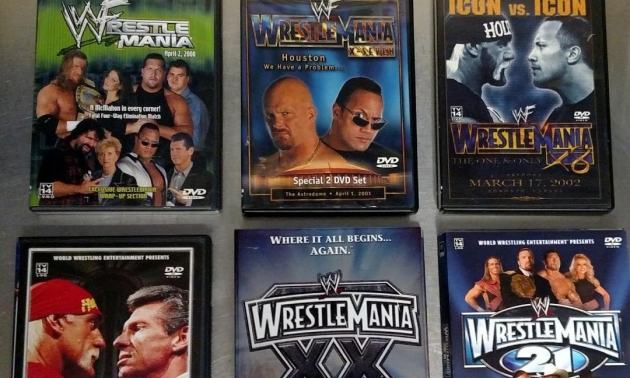