It’s the FINAL DAY of another of WDN‘s week-long reveals!

We hope Daniel Bryan Week has you excited for “Daniel Bryan: Just Say Yes! Yes! Yes!”, ahead of WWE officially releasing it to stores on DVD and Blu-ray in early June.

DAY #7 mixes up a blend of the remaining content, bringing you 5 newly revealed matches and all taken from a variety of settings – RAW, SmackDown, Velocity, NXT, and PPV!

WWEDVD.co.uk is scheduled to release “Daniel Bryan: Just Say YES!” to fans in the UK and Europe this June! Look for a pre-order announcement in the coming weeks.
DAY 7 – “Potpourri”

— 2 out of 3 Falls Match for the World Heavyweight Championship
Sheamus vs. Daniel Bryan
Extreme Rules • April 29, 2012

Opt for the Blu-ray edition and get over 8 hours and 30 minutes of Daniel Bryan – including an extended version of his WWE Network documentary, a compilation of more than 20 extras made up of matches and segments, plus an all-new interview with the man himself!

Be sure to check back in with WrestlingDVDNews.com again tomorrow.

The content listing of WWE’s new Daniel Bryan DVD and Blu-ray will be unveiled in FULL! 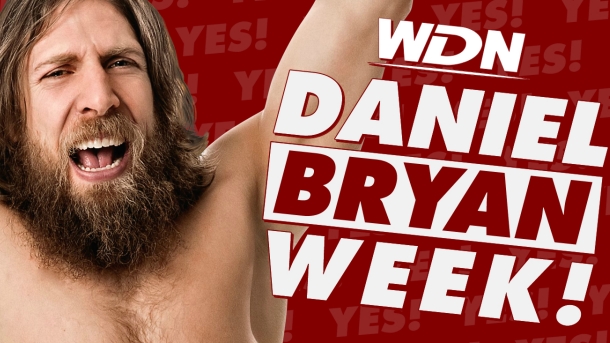 Once the full content listing of the DVD is out, we’ll be choosing a winner of our giveaway.

Anyone signed up to our e-mail subscription service has a chance to win a WrestleMania prize pack – including a WrestleMania 30 DVD, mini-book and T-Shirt for FREE!

1) Sign up for our free e-mail notifications (if you haven’t already) by entering your address in the box below. You’ll be added to the list to receive news first and never miss out.

3) Enjoy the breaking news updates and the chance to win the WrestleMania package – you will contacted at the same e-mail address if you are selected as the winner.

Good luck to all of the WDN readers who enter the Mania giveaway! 😛