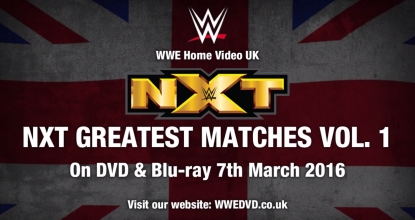 “NXT’s Greatest Matches Vol. 1” has been confirmed for release to fans in the UK and Europe on March 7th, 2016 – one day before the planned release to the United States.

The announcement was made today by WWEDVD.co.uk, who also revealed the trailer!

The official Twitter account for WWE NXT continues to name matches planned for next year’s new DVD and Blu-ray compilation. Confirmed so far this week are the following:

Get the WWE “NXT’s Greatest Matches Vol. 1” DVD or Blu-ray…