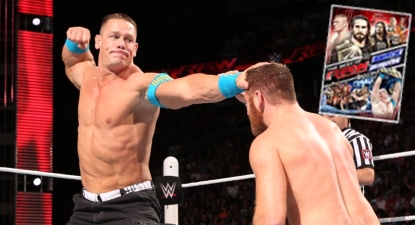 As promised, our “RAW vs. SmackDown”-themed content teasers for the upcoming WWE DVD “The Best of RAW & SmackDown 2015” continue… right now!

We’re back over on the red side as today’s exclusive reveals are four new RAW matches planned for inclusion in the compilation – two of John Cena’s “U.S. Open Challenges” are now confirmed, along with two Divas matches featuring Paige, Nikki Bella, and Sasha Banks.