New information on the Undertaker and Kane “Brothers of Destruction – Greatest Matches” DVD reveals an approximate runtime of 1 hour and 32 minutes. As you may recall, this is planned to be a budget single-disc DVD with its content made up of 7 matches.

A new synopsis for the “Brothers of Destruction” DVD can be read below.

The saga of Undertaker and Kane has taken many sordid twists since the inferno that left their souls forever charred. The combustible combo has buried their deep-seeded rivalry on several occasions, always close enough to the surface to ignite at the touch of a spark. Still, their blood bond makes them an indomitable force in the ring. And every so often, old wounds close up long enough to unite WWE’s darkest duo under one common purpose – destruction.

In this DVD, see the Brothers of Destruction scorch their path of wreckage through WWE. Seven devastating matches against some of the greatest tag teams of the new millennium are presented in their entirety. Witness WWE’s most volatile Superstars, The Deadman and the Devil’s Favourite Demon, on the same page before they tear each other apart once again!

The UK and Europe will be getting an exclusive Blu-ray edition also. The extras on that version will be 4 additional matches which have a total runtime of approximately 1 hour and 24 minutes. That takes the full content of the Blu-ray up to almost 3 hours in length.

If buying online, you can get a copy for $12.99 here on WWEShop.com, or alternatively $13.44 here on Amazon.com. Getting hold of it in-store may be a cheaper option. 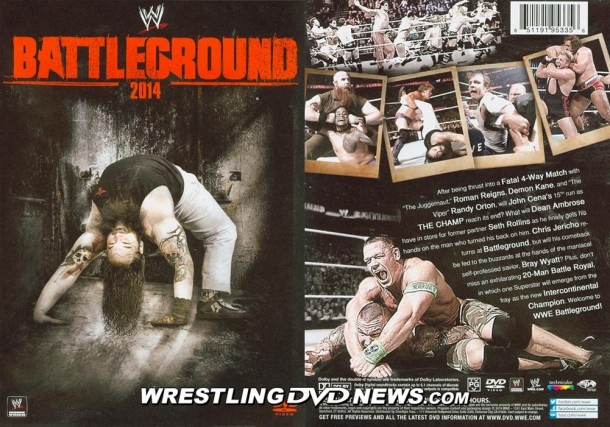 The 5 extras on today’s Battleground DVD are the following:

The winner of our WWE DVD prize pack giveaway has e-mail address beginning “Evolution67..@..”. If that’s you, look out for an e-mail to arrange shipment of your prizes.

The latest WWE DVD documentary that’s now available to watch instantly on the WWE Network is this time one from 2006 – Born to Controversy: The Roddy Piper Story.

For those still wanting to collect the Blockbuster exclusive WWE DVDs (with bonus discs), Frank Werner sends word of his eBay auctions linked to below, all starting at just $0.99.

And these deals on two WrestleMania Anthology box sets also…