Here’s a pic of the Best Buy exclusive Best of WCW Nitro Vol. 2 DVD released this week. It contains the two extra matches we recently reported on, and is available for the special price of $17.99 this week only. 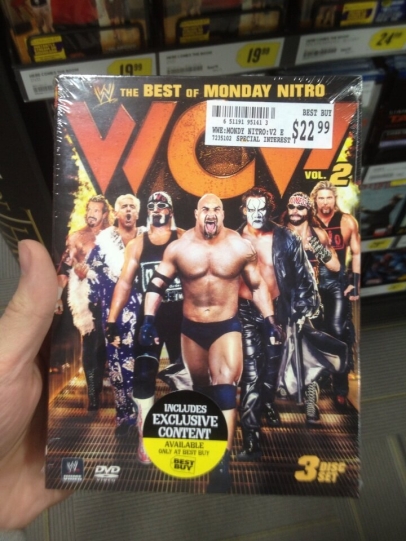 A number of WWEDVDNews readers let us know that they’ve had a difficult time getting hold of the Blu-ray edition of Nitro Vol. 2 – it’s currently backordered on Best Buy’s website and apparently will not be available there until sometime in March.

Amazon, however, have the Blu-ray in stock now and priced at $22.99 on this page.

For those wondering, Best of Nitro Vol. 2 hits Australia March 6th at WWEDVD.com.au, and follows on to Europe April 29th at WWEDVD.co.uk.

Below are trailers for recent WWE DVDs and the upcoming Royal Rumble 2013 release.

FremantleMedia commented via Twitter on the possibility of the UK version of the new Mick Foley “For All Mankind” DVD also having a free Mr. Socko puppet included. They say it is currently only confirmed for initial orders in the US, but inferred this may change. There are four pre-order listings for the new Mick Foley DVD and Blu-ray on the US Amazon.com site, so perhaps two of these will have the puppet attached. There are no further details yet.

Fans in the UK and Europe, if you pre-order the Survivor Series 2012 DVD or Blu-ray from WWEDVD.co.uk (available March) you will be automatically entered into a competition to win cover sleeves signed by Ryback. They have 40 to give away – 20 for the DVD, 20 for the BD. The Attitude Era DVD is the next available title to the UK officially released next Monday. 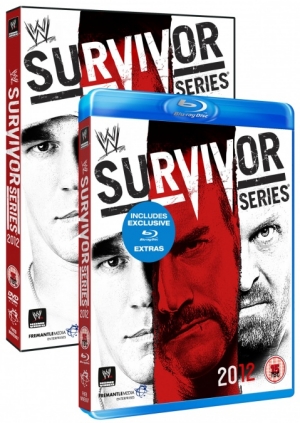 Bret Hart: The Dungeon Collection is now available to pre-order on WWEShop.com.

Speaking of WWEShop, we hear they are running a new promotion for this Presidents’ Day weekend which will get you free shipping on all orders of $60+ with code “CHAMBER“, and include DVDs on sale for as low as $5.99!

The following WWE DVDs are on sale there for $5.99 right now:
– Andre the Giant
– Best of Raw 15th Anniversary
– Best of Raw 2009
– Best of Raw 2010
– ECW Blood Sport
– Greatest Stars of the 90s
– Hell in a Cell Anthology
– Knucklehead
– Legends of Wrestling Collection
– No Way Out 2009
– Starrcade Essential Collection
– Superstar Collection (Cena, HBK, Sheamus, Ryder, Bryan, Mysterio)
– The Rise and Fall of ECW

Click here to grab them at WWEShop – look out for more!

The Top 25 Rivalries in WWE History and WrestleMania 29 are now available to pre-order on Amazon over here, and both are to be produced on DVD and Blu-ray formats.

Reports are surfacing online that WWE are looking to acquire the World of Sport wrestling tape library which is owned by ITV in the UK. A couple of months ago there was a rumor that WWE were attempting to source a World of Sport era match for the upcoming Bret Hart Dungeon Collection DVD, so perhaps the two are connected.

Subscribe to our free WWEDVDNews email updates at wwedvdnews.com/subscribe. Simply enter your address in there, then verify it when you get an email afterwards.