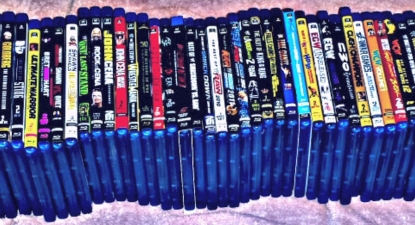 WrestlingDVDNetwork.com has received word that the following WWE Home Video titles will no longer be released on Blu-ray format, instead strictly DVD only, in Australia and New Zealand:

In the case of the 3-disc sets in the list above, by our count this marks the first time in over 5 years that WWE DVD “feature” compilations are being released without accompanying Blu-ray editions, especially noteworthy when those Blu-ray editions have been offered in other regions.

This is a loosely similar situation to “The Best of Raw and SmackDown” series, released exclusively on DVD in recent years, however the bigger sets have always been offered on Blu-ray too.

WWE’s official Home Video licensee in Australia, Madman Entertainment, confirmed to us that the move is a response to facing less demand for WWE Blu-ray products as compared to the DVD counterparts; a familiar situation we’ve seen with PPV Blu-ray cutbacks in the United States.

The news does NOT affect upcoming releases in the US or UK – SummerSlam and Brock Lesnar will both be available on Blu-ray (and Hardcore already shipped earlier this month). 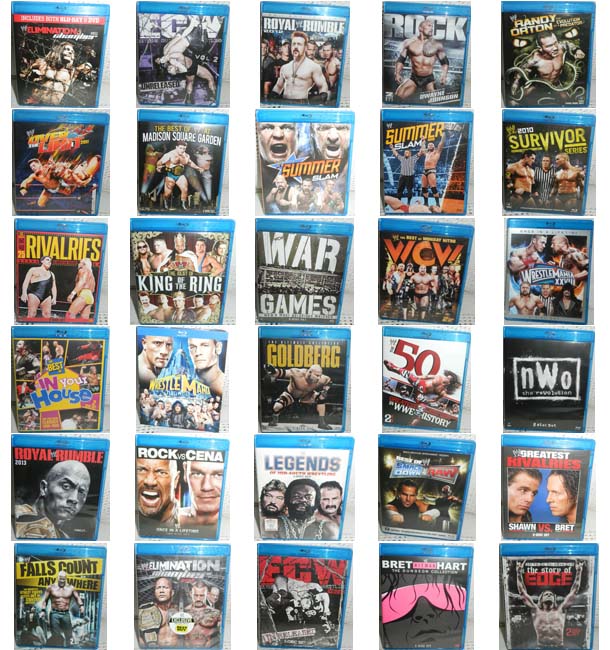 Yesterday we exclusively revealed the cover artwork and updated content listing for the new “Randy Orton – RKO Outta Nowhere” DVD (which will definitely be on Blu-ray too, by the way).

And now we can show off even more artwork planned for the packaging!

UK FANS: Heads up, WWE’s new Randy Orton DVD and Blu-ray just went live for pre-order at WWEDVD.co.uk. If you order it there this weekend before Sunday at midnight, entering promo code “RKO15” at checkout, you will get 15% off either version and FREE UK delivery. 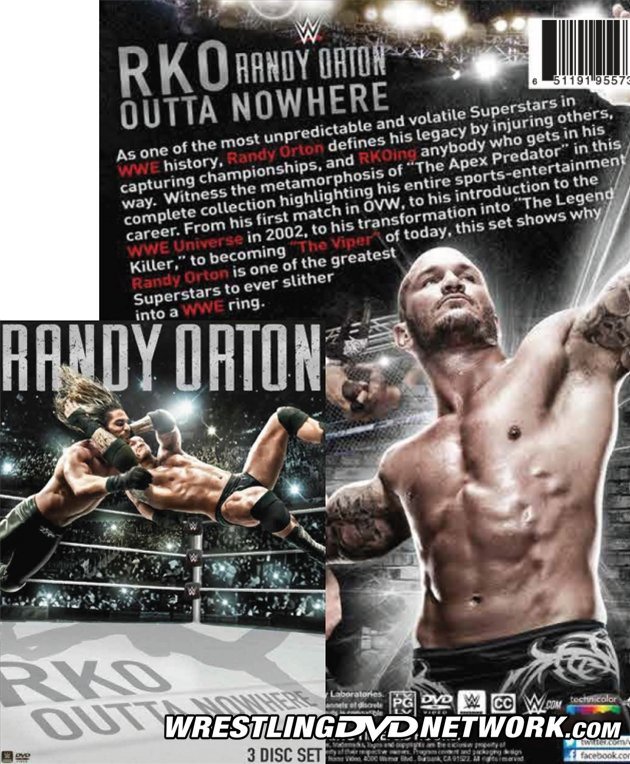 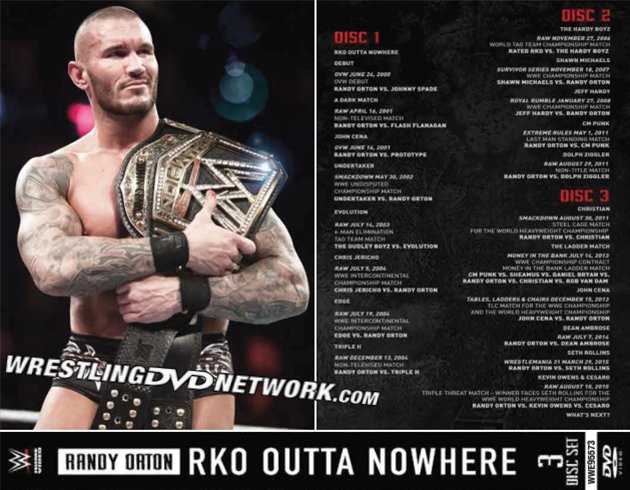 – Australia: TBA. Your chance to pre-order is coming shortly at Madman.com.au.

Announced to run the whole of the weekend here on WWEShop.com is a big $5, $10 and $15 sale on loads of goodies. And of course, the best bit is that the sale features more than 30 different WWE DVD/Blu-ray titles all up for grabs from just $5 each, including some recent releases! 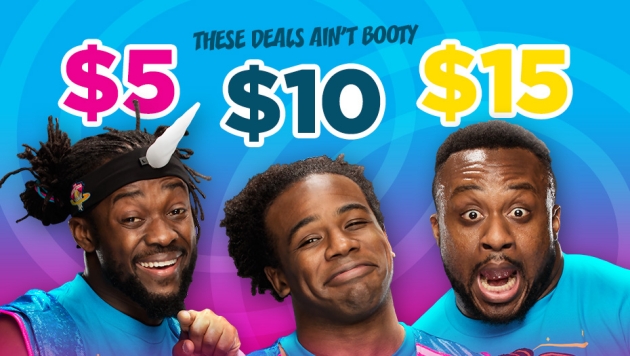 Look out for a bunch of PPVs priced at $5, some major 3-disc DVDs like Scott Hall, Dudley Boyz and Eric Bischoff for only $10, and select Blu-rays down to $15. As usual, get the most out of WWEShop’s sales by ordering a few DVDs together – that way you can take advantage of the flat-rate $6.99/$9.99 shipping they offer rather than paying out that much for only one title.

Here’s a list of the deals to be had right now, while stocks last… 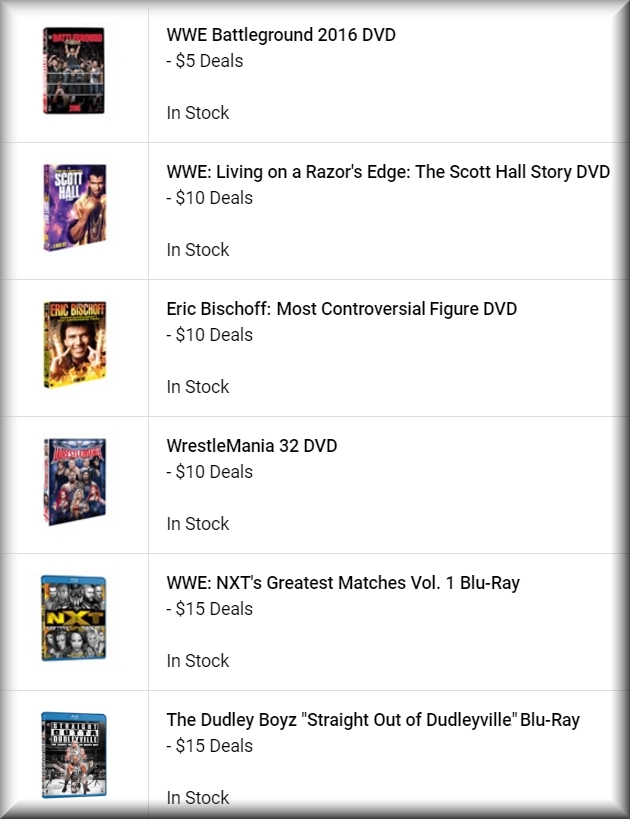 One of the next incoming WWE DVDs, “Brock Lesnar – Eat. Sleep. Conquer. Repeat.”, has had a slight price drop on Amazon ahead of next month’s release.

The potentially cancelled Collector’s box set version has still not returned to Amazon as of writing.

Speaking of box sets, the completists among us might be interested in hearing about a recent WWE DVD box set that flew under the radar – “The Ultimate John Cena vs. The Rock Box Set”.

As for its content, inside the Australian exclusive 4-disc set looks to be the “Rock vs. Cena: Once in a Lifetime” DVD and a single-disc version of “The John Cena Experience” DVD. 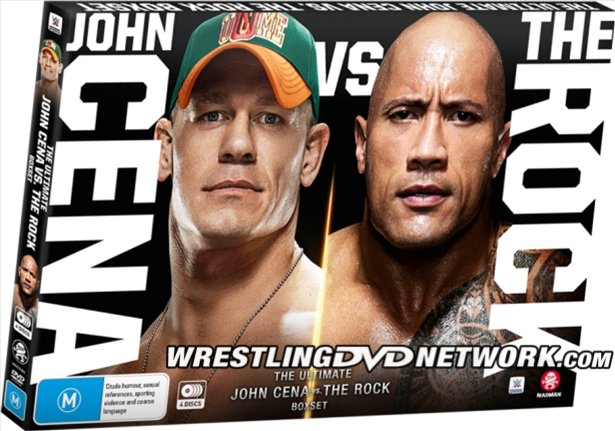 AUCTIONS WITH ATTITUDE: Expiring on eBay is a potentially great deal on the new Attitude Era Vol. 3 DVD that’s filled with unreleased content, and this one’s complete with the mini-book! 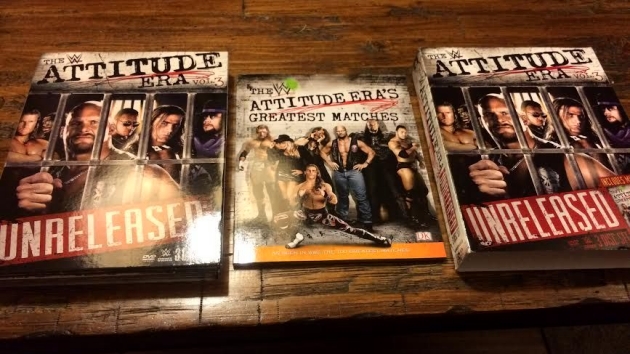 This weekend several rare WWF/WWE DVDs that were released back in the Attitude Era are also being auctioned off at decent prices, including the original Hardcore DVD and a chance to add both the WrestleMania 16 and 17 DVDs to your collection in one hit. Links below: