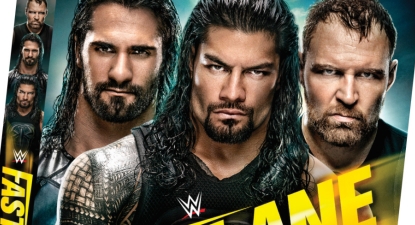 We’re in the Fastlane to WrestleMania!

Justice is back for the final time when Roman Reigns, Dean Ambrose and Seth Rollins re-form The Shield to face Baron Corbin, Drew McIntyre and Bobby Lashley. Becky Lynch hopes to make her dreams of headlining The Grandest Stage of Them All a reality when she faces Charlotte Flair. If Becky wins, she’s in the RAW Women’s Championship Match at WrestleMania.

WWE have just finalized the official cover artwork for the Home Video release of the Fastlane 2019 Pay-Per-View aired this past Sunday — let’s take a first look!

WrestlingDVDNetwork.com can also exclusively reveal the list of DVD extras which includes the Kickoff Show match and content from RAW and SmackDown Live episodes leading into the PPV.

The Fastlane 2019 DVD will be a 2-disc set and it’s scheduled for release to the United States on April 16th (grab it from Amazon.com), to the United Kingdom on April 29th (Amazon.co.uk), to Canada on April 30th, and to Australia on May 15th. 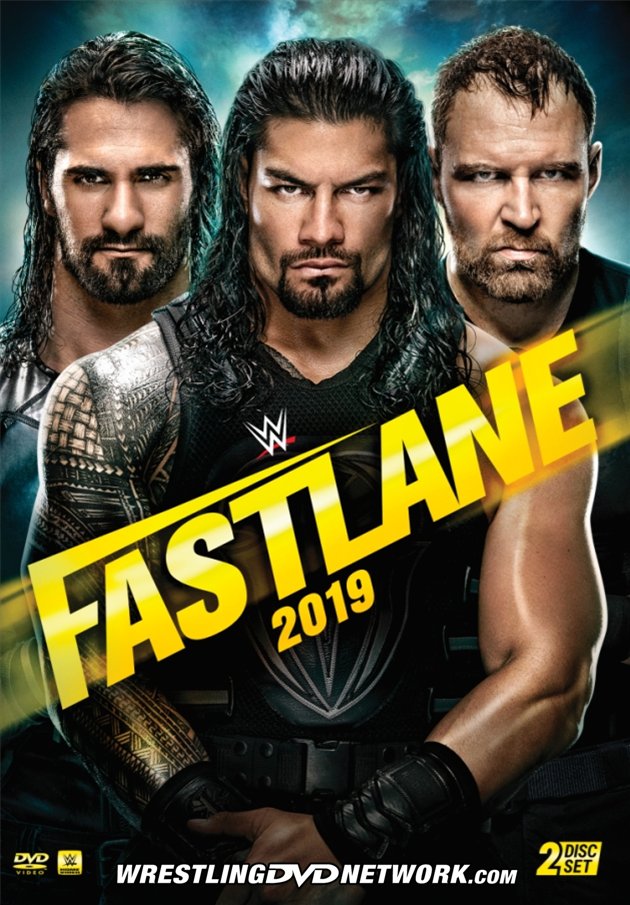 We’re in the Fastlane to WrestleMania!

The New Dominant Force in WWE

No Stronger Connection than the Boss ‘N’ Hug Connection

An Interruption for Elias 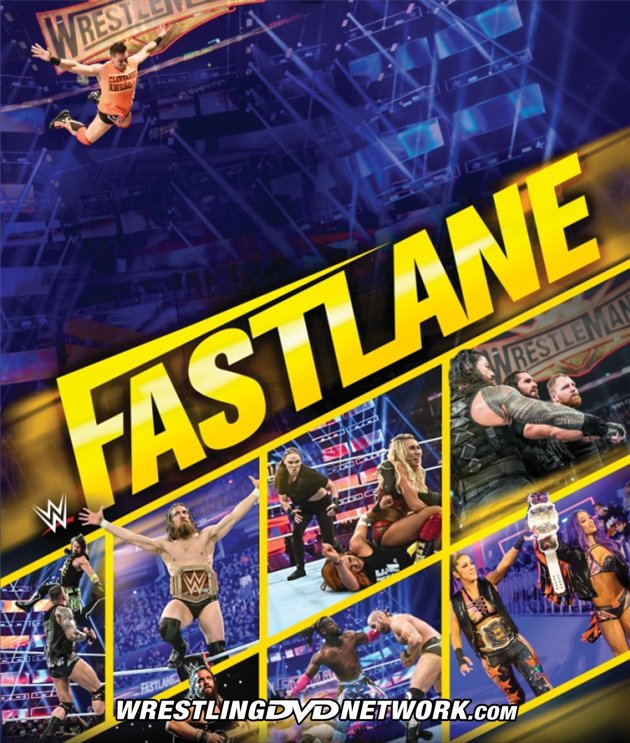 – UK/Europe: April 29th. Pre-order a copy of the Fastlane DVD now via Amazon.co.uk.

– Australia: May 15th. Your pre-order opportunity just went live over at Madman.com.au. 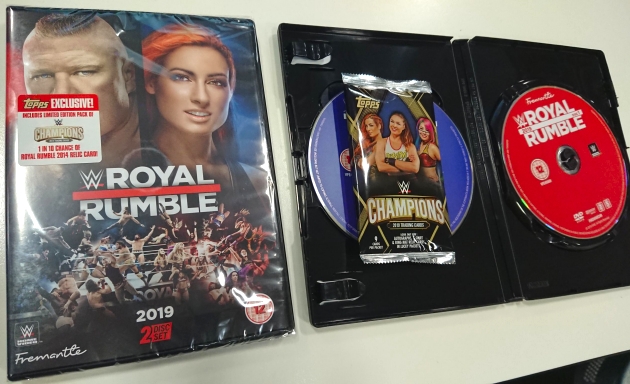 A juicy, “event-used” store exclusive WWE DVD offering is about to hit the UK next week with the release of Royal Rumble 2019 on DVD and Blu-ray formats in the region.

With DVD purchases in-store at ASDA in the UK, or both DVD and Blu-ray purchases online at WWEDVD.co.uk, this year’s Rumble will give you the chance to own a Batista trading card that features an authentic piece of the ring canvas from Royal Rumble 2014, the event where he won the 30-Man Royal Rumble Match for the second time. 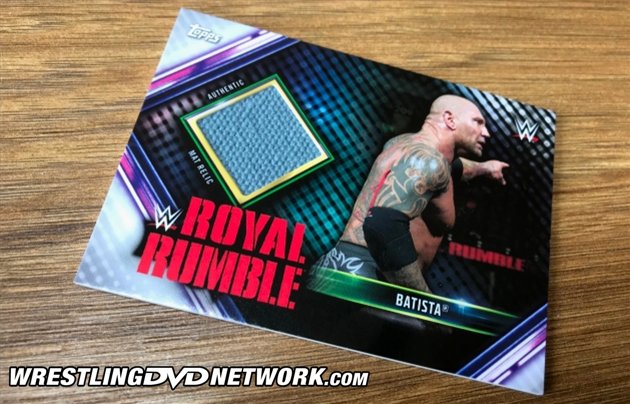 WWE Home Video UK (Fremantle) and Topps have teamed up to add packs of the new WWE/Topps Champions 2019 trading cards free inside the new DVD/Blu-ray. With these packs there’s a 1 in 10 chance of finding the “Royal Rumble 2014 Event-Used Mat Relic Card”.

The WWE/Topps Champions 2019 series of trading cards were launched last Friday, March 8th, and 4,000 promotional packs were set aside for WWE Home Video UK. With these, fans have 2.5 times better odds of securing the exclusive piece of memorabilia than with the standard packs purchased on their own (1 in 24 chance).

The series also features Autograph and Superstar Worn Shirt cards. As for the Royal Rumble 2019 DVD/Blu-ray, it lands in the UK this Monday – we hope you find the Batista card with your copy! 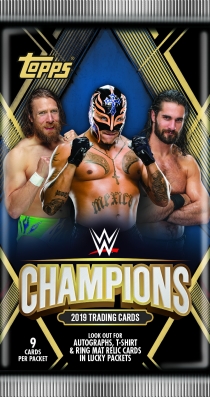 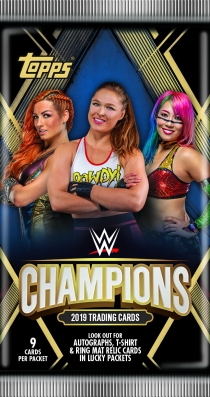 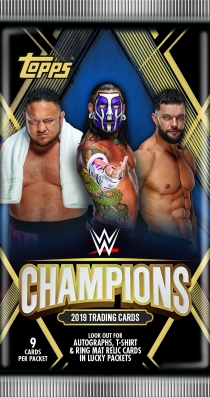 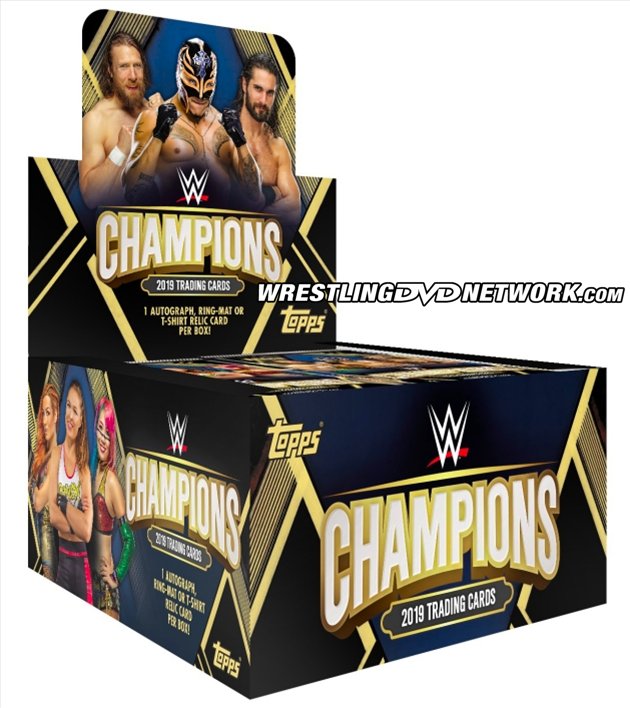