As you’ve been hearing here on WrestlingDVDNews.com, in September WWE plans to bring out a “Brothers of Destruction” DVD, covering Undertaker and Kane as a duo.

Below we can reveal the official synopsis and some further details too.

Brothers of Destruction chronicles the long history of the partnership of Undertaker and his half-brother, Kane. Following Kane’s introduction to WWE in the late 90’s, he and Undertaker engaged in bitter battles, before finally uniting as a team known as the Brothers of Destruction. Their on-again, off-again partnership captured the imagination of the WWE universe throughout the next decade, with memorable battles both individually and as a team, against some of the greatest Superstars in WWE history.

This single-disc DVD contains 7 matches featuring the best action from Kane and Undertaker as a tag team spanning from their formation as a team in 2001 through some of their most recent matches in 2008.

The following 3 matches are strong possibilities to be included: 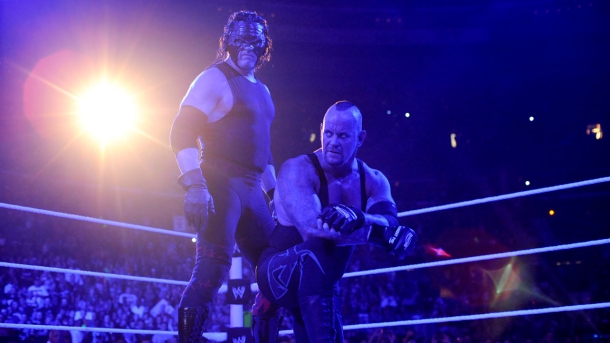 Sign up to our free email subscription list because we’re giving away 2 copies of the Bobby “The Brain” Heenan DVD (one in US format, and one in UK format).

Do so before Sunday night to be eligible. Existing subscribers are in too. Simples!

A copy of the original WWF WrestleMania 17 DVD sold for $81 here on eBay.com yesterday, and another one also sold earlier this week for $85!

There are two more copies of it being auctioned off in the next few days:

“Breaking the Code: Behind the Walls of Chris Jericho” will be the next WWE DVD documentary to stream on the WWE Network. As usual, you’ll find it in the Beyond the Ring category once added. You can watch it early now by searching it out.

The upcoming Extreme Rules 2014 DVD and Batista “Animal Unleashed” DVD/Blu-ray have now been added here to WWEShop.com for June pre-order.