We can now reveal an official synopsis for the Raw 20th Anniversary box set!

The synopsis confirms, as we’ve been reporting, that the box set will be 12 discs on DVD and 10 discs on Blu-ray. It also affirms the “greatest episodes” theme of the release and divulges 5 matches you can expect to see from episodes included on there.

The 20 Greatest Episodes Uncut Unedited. WWE presents the Raw 20th Anniversary Collection, a 12 DVD set packaged in a deluxe digipak. Includes 20 of the greatest episodes in full on DVD for the first time. Featuring classic matches and moments including Lita vs. Victoria in a Steel Cage Match, Undertaker, Triple H & Shane McMahon vs. Stone Cold Steve Austin, The Rock & Mr McMahon with Special Guest Referee Shawn Michaels, The Rock vs. Mankind in a No Disqualifications Match for the WWE Championship, Rob Van Dam vs. Santino, CM Punk vs. Matt Hardy and much much more.

Let’s break down the synopsis and decipher the Raw episodes that have been revealed.

Other highlights of this Raw include Sgt. Slaughter vs. Randy Orton, Goldberg vs. Triple H, and Ric Flair & Batista vs. Shawn Michaels & Chris Jericho.

Other highlights of this Raw include Sable vs. Debra in a Bra & Panties Match for the Women’s Championship, and Pat Patterson & Gerald Brisco vs. The Mean Street Posse.

Other highlights of this Raw include Triple H vs. Mankind, Road Dogg vs. Al Snow for the Hardcore Championship, and Kane vs. Gerald Brisco & Pat Patterson.

Other highlights of this Raw include Jeff Hardy vs. Carlito in a Ladder Match, Batista, Triple H & Ric Flair vs. Randy Orton, Edge, & Umaga, and a 15-Man Legends Battle Royal.

The “Raw 20th Anniversary Collection” can be pre-ordered at this link from $62.99.

WWEDVD.co.uk have revealed the following two videos, which preview the new Best of WWE at Madison Square Garden and Legends of Mid-South Wrestling DVD and Blu-ray sets.

Both of those titles hit the United Kingdom and Europe next month.

Here’s a reminder that WWEShop have a limited time Buy 1 Get 1 Free DVD and Blu-ray sale under way right now at this link. The sale is likely to expire after this weekend. 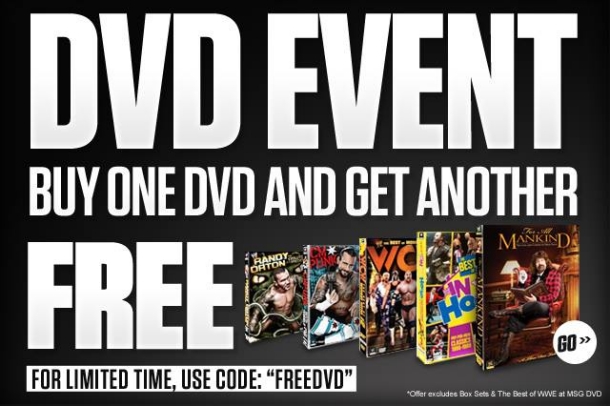