One of the latest exclusives here at WrestlingDVDNetwork.com revealed the full content listing for WWE’s upcoming Home Video collection of WWE 24 documentaries: “WWE 24 – The Best of 2018”.

Four episodes of the series are now confirmed — ” The Hardys: Woken”, “WrestleMania Orlando”, “Empowered” and “RAW 25” — all of which have appeared on the WWE Network streaming service this year. Here on DVD each documentary will have a set of related extras to watch with it.

Today we’re back with another exclusive update; this time unveiling the official trailer for an early sneak peek at the 2-disc DVD set well in advance of its December release date.

– United States: December 11th. Your pre-order opportunity is due soon here on Amazon.com.

– Australia: TBA. Look for a release date announcement shortly over at Madman.com.au. 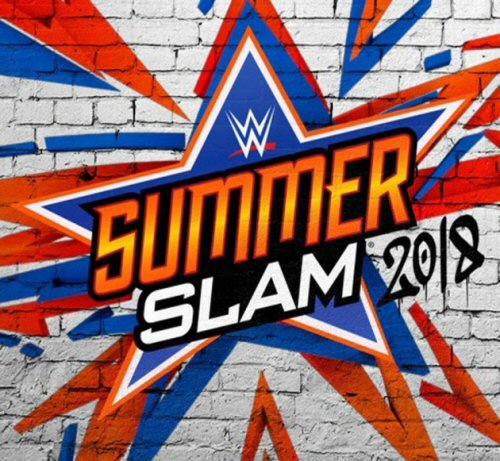 Did SummerSlam 2018 have you sizzlin’ last weekend? You can own a physical copy of “The Biggest Party of the Summer” exactly four weeks today when you pre-order here on Amazon.com.

This year’s SummerSlam DVD will once again be a 2-disc set to accommodate the 4-hour PPV and special features. There will also be a UK exclusive Blu-ray edition released slightly later in October.

The first sighting of the SummerSlam cover artwork and planned extras is forthcoming. 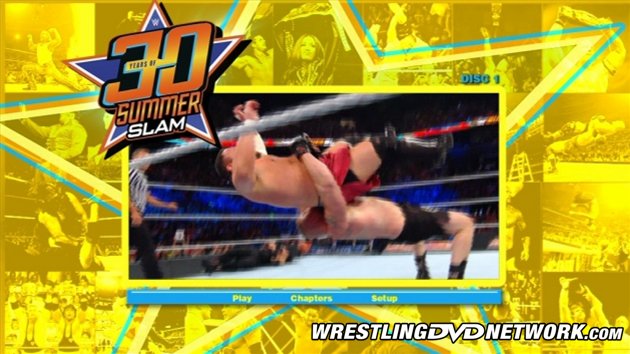 If that’s not enough SummerSlam, don’t forget that one week from today WWE’s new “30 Years of SummerSlam” DVD will hit stores across the United States.

This is your big 3-disc WWE DVD offering in August featuring more than 8 hours of the very best SummerSlam matches and moments witnessed between 1988 and 2017 [exclusive preview].

Heads up to fans in the UK, if you’re about to add SummerSlam 2018 or “30 Years of SummerSlam” to your DVD collection then buying through WWEDVD.co.uk is the way to do it – they have a great pre-order promotion running now where any order placed with them for either of those titles (or both) will include a FREE SummerSlam DVD or Blu-ray along with it.

The free SummerSlam DVDs/Blu-rays being offered are the PPV events from the previous five years (2013-2017). 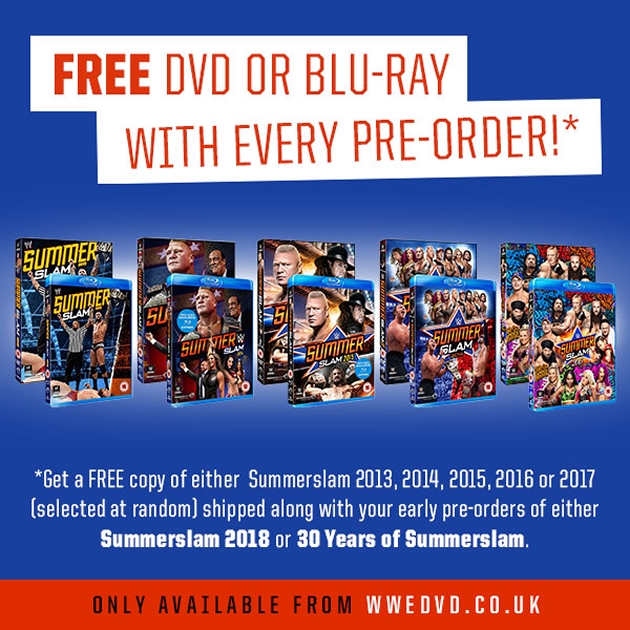 Pre-order Summerslam 2018 (DVD or Blu-ray) at WWEDVD.co.uk and get a copy of a past Summerslam PPV event, on the format you ordered, absolutely FREE*…

…and get another FREE* copy of a past Summerslam PPV event on DVD when you pre-order the 30 Years of Summerslam DVD!

*Free Summerslam PPVs will be selected at random.