In a recent interview with Phil Strum at the Poughkeepsie Journal, Paul Heyman discussed a number of topics from the WWE Network to his upcoming WWE DVD project.

“I really don’t know much about it. I’m sure WWE has been trying to dig up a lot of dirt on me. You don’t have to dig too hard. It will be a snapshot of Paul Heyman at 48 years old, which would be a different look than if he was 38 years old and a different look from when he was 28 years old. If you did this documentary 10 years from now when I am 58, that would be a far different look at me. It’s a look at Paul Heyman at this stage of his career, begrudgingly reflecting on what he has accomplished so far and very much passionately looking forward to future things to accomplish in the next stage of his career.”

Paul Heyman’s WWE DVD is set for release this August and it could be one of the most interesting projects that WWE has ever put together. Of course we will have much more information about the DVD in the coming weeks.

In addition to United We Slam – The Best of Great American Bash (as we reported a couple of days ago), WWE will release two PPV DVDs in the month of July. Payback will be released on July 1st followed by Money in the Bank which will hit stores in the United States on July 29th, below you will find the synopses for both events:

“Following the excitement of the inaugural edition of Payback in 2013, get ready for more action-packed matches in the 2nd ever Payback, coming again from the Allstate Arena in Rosemont, Illinois! Memorable matches from the 2013 event included a triple-threat match for the Intercontinental Title between Wade Barrett, Curtis Axel and The Miz, as well as AJ Lee winning her first Divas Championship over Kaitlyn and John Cena retaining the WWE Championship over Ryback in a “Three Stages of Hell” match. This year’s event promises to be even more exciting!”

MONEY IN THE BANK:

“The fifth annual Money in the Bank pay-per-view is sure to bring lots of excitement as someone will win the opportunity to cash in a briefcase that contains a contract for a world title match anytime in the following 12 months. And for the first time this year, with the titles now unified, there will only be one opportunity to win a contract! Past briefcase winners include Kane, Daniel Bryan, John Cena and Randy Orton.”

Expect both of these DVD titles to be made available for pre-order on retail sites in the next few weeks.

You may remember that late last year WWE released: “The History of WWE: 50 Years of Sports Entertainment” DVD/Blu-Ray, well following up on their 50 year milestone, they have also released a really nice book entitled: WWE 50. The book was written by WWE Encyclopedia author Kevin Sullivan (not The Taskmaster) and looks at the history of the promotion, its stars, events, and other activities throughout the past 50 years. The coffee table style book has some really nice photographs and artwork and even looks at WWE DVDs and Home Video, as you can see below: 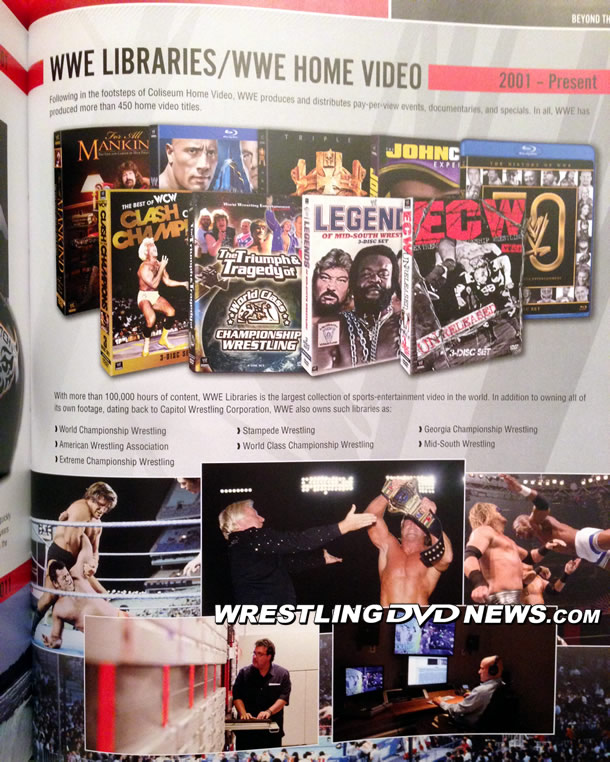 Fans in the United States can order a copy of WWE 50 from Amazon.com now for $19.49, click here to order yours now…

Entries will close at 9pm (BST) on Sunday 6th April, so head over here and make your predictions now!

Also to celebrate the ‘showcase of the immortals’, WWEDVD.co.uk have some offers on their WrestleMania back catalogue DVD and Blu-Ray titles, the DVD/Blu-ray sets are priced from £9.99 until Tuesday, check them out here…