Officially in stores this Tuesday is “The Flintstones and WWE: Stone Age SmackDown” on DVD and Blu-ray, so here’s a first look and a review of the animated movie!

Let’s Yabba-Dabba Do this… 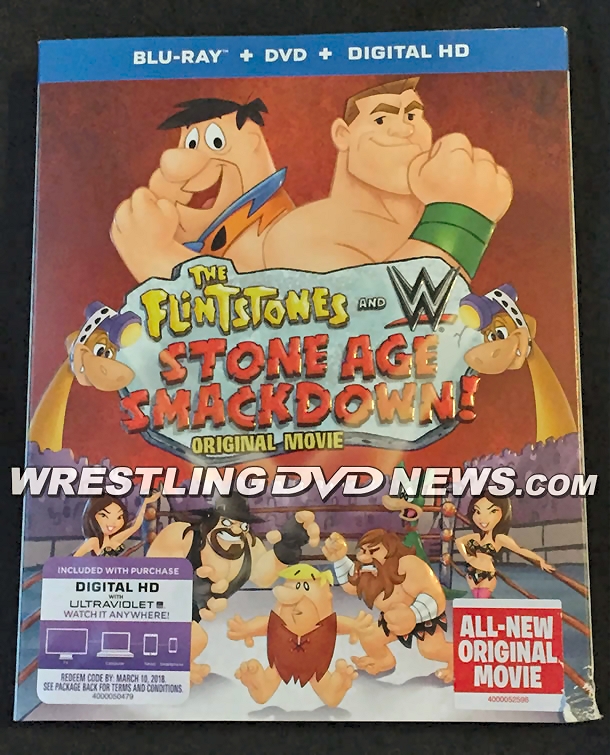 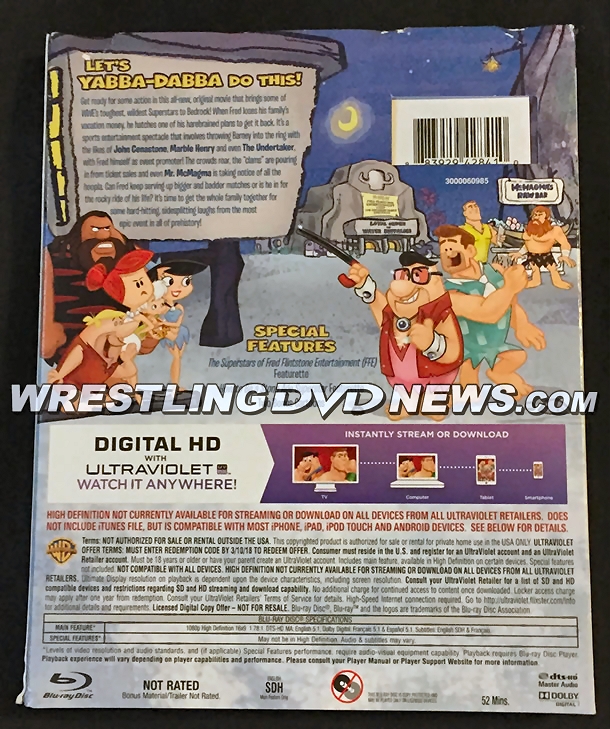 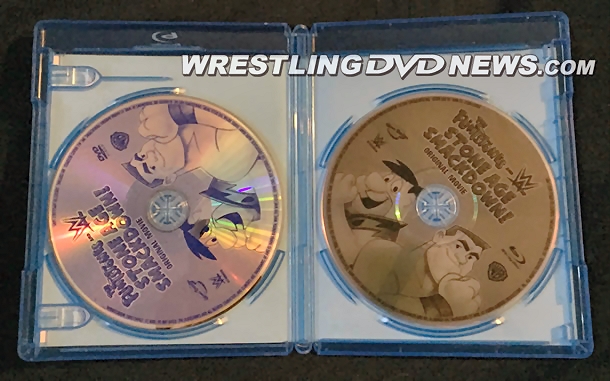 How many nights have you laid awake wondering what would happen if your favorite WWE Superstars and Divas crossed paths with the most well known and beloved prehistoric families?

Folks, welcome back slumber into your life as now we have The Flintstones and WWE: Stone Age SmackDown. What ensues is a combination of mild hilarity and an ample dose of hijinks. 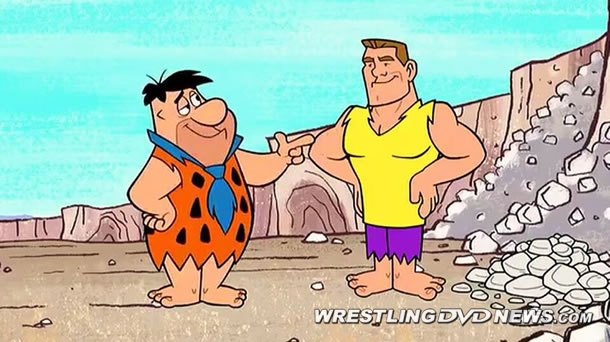 The total run time of the special is just over 51 minutes and this marks the first time in nearly 15 years since we have had a new Flintstones feature. Also did you know that when The Flintstones first hit the airwaves almost 60 years ago, WWE was operating as the Capitol Wrestling Corporation and hadn’t yet debuted their own World Title! (If you are wondering, over at the National Wrestling Alliance, Pat O’Connor was the reigning and defending Champion) 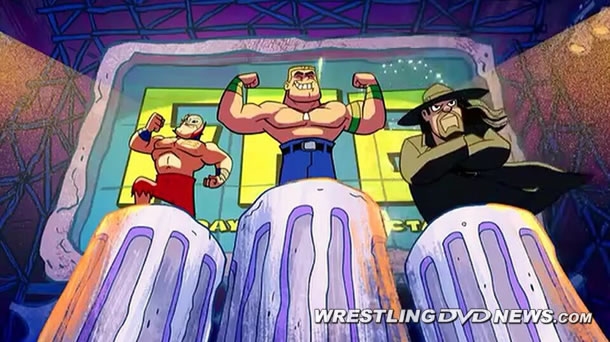 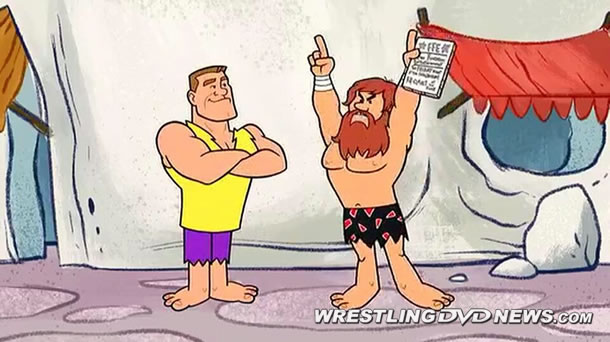 The basic premise behind the special is… after Fred fails to negotiate an advance on his wages he needs to come up with a way to raise the clams for his family vacation and in doing so he makes the discovery of a sport which would ultimately be known as pro-wrestling. 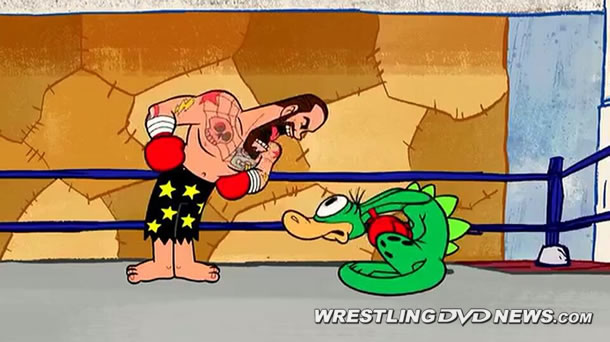 The inspiration for Fred’s latest scheme comes following an incident between his old pal Barney and CM Punkrock at a Water Buffalo fundraising event, after Punkrock ‘punks’ out Barney’s Hopparoo (Hoppy) who is putting on a boxing exhibition. Following the event Fred sets out to recruit a band of wrestlers for his promotion beginning with the quarry’s newest starter, John Cenastone. Together Fred and Cenastone manage to bring Rey Mysteriopal and The Undertaker on board. 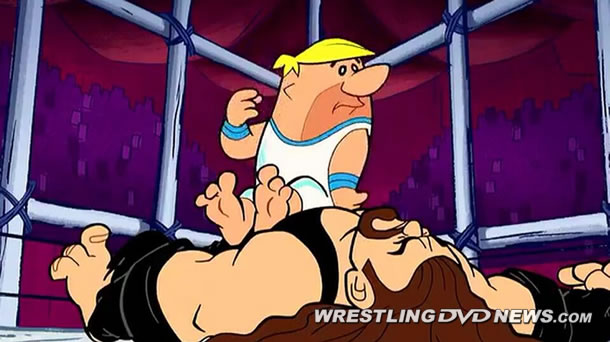 After successfully putting on his first show (headlined by Barney vs. The Undertaker in a cage) Fred secures a TV deal and holds the first “FFE (Fred Flintstone Entertainment) Saturday Night Spectacular”. However, after Barney pulls out of his one-on-one encounter with CM Punkrock, Fred has to don the tights to help defend the honor of his buddy. The event is so successful that it inspires a young Mr. McMagma to get involved in the wrestling biz, with McMagma promising to make a success of it, even if it takes him millions of years! 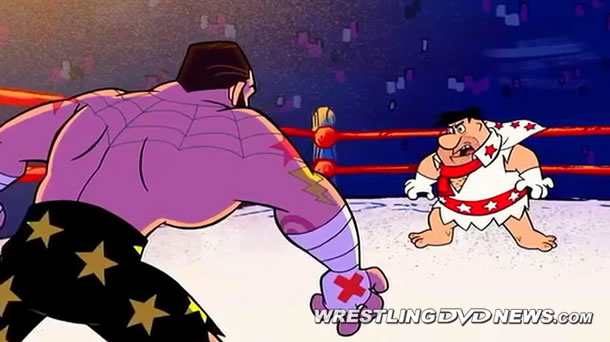 What would The Flintstones be without the wisecracking animals that are used to assist with the functions of modern-day prehistoric life. On this particular front Stone Age SmackDown does not disappoint, so keep your eyes peeled for those scattered throughout the show. 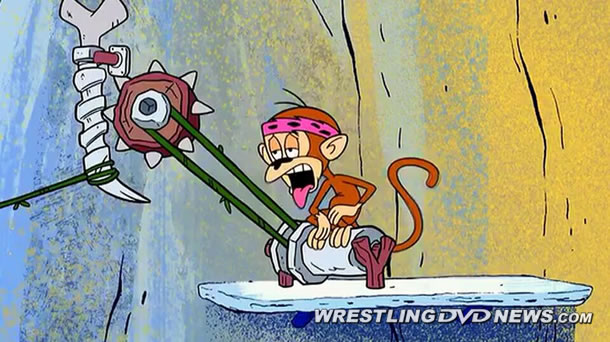 Obviously Stone Age SmackDown likely won’t be picking up too many gongs during next year’s awards season, and if you were expecting to see the movie love child of: The Shawshank Redemption, and The Godfather, your expectations were probably a tad too high, maybe think love child of Fight Club and Knucklehead. However, it was a fun 50 minutes, moving along at a great pace and certainly not dragging in the slightest.

Also, in my opinion, this latest WWE Studios partnership eclipsed the previous animated special – Scooby-Doo: WrestleMania Mystery, as rather than creating a “WWE City” where all the Superstars live, Stone Age SmackDown took the WWE characters and dropped them into a whole new universe, and the result was really pretty damn good. 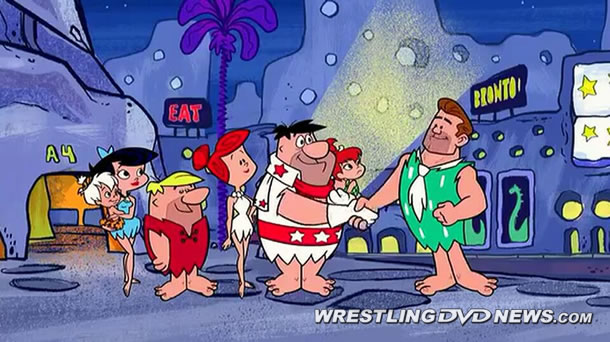 “The Superstars of Fred Flintstone Entertainment (FFE)” – this 9 minute feature looks at the superstars and divas featured in Stone Age Smackdown along with comments from the producers and a selection of WWE Superstars and Divas (namely John Cena, Mark Henry and The Bellas). 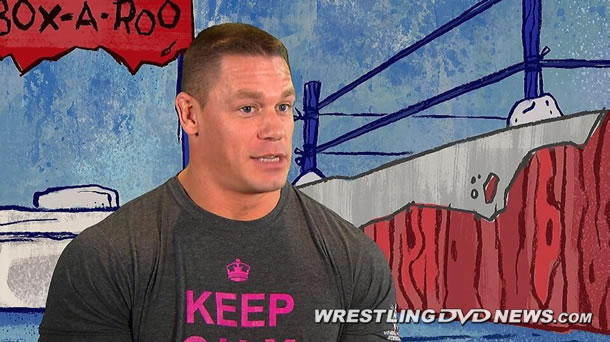 “How to be a Stone Age Superstar” runs for 4 minutes and discusses how Stone Age SmackDown managed to capture the authenticity of the WWE Superstars through their identities, signature moves and costumes. 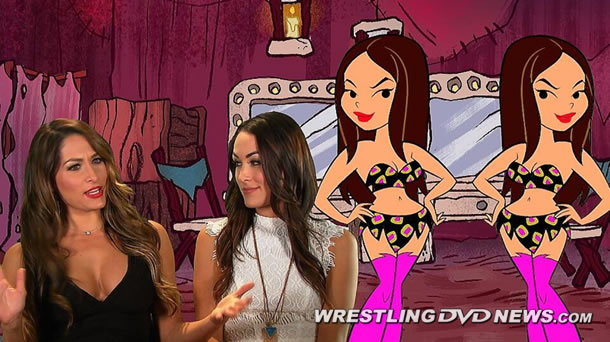 “The Flintstones and WWE: Stone Age SmackDown” officially hits stores this coming Tuesday and while it might not quite be worth the near $20 price tag, it was still a pretty cool watch and much more enjoyable than last year’s Scooby Doo offering.

Get your copy of the The Flintstones & WWE: Stone Age SmackDown now…