Available Now: Photos of WWE’s New HELL IN A CELL 2018 DVD, Review of SUMMERSLAM on Blu-Ray

Some have had trouble finding it but here’s your first look at the new WWE DVD!

This week the second WWE Home Video release of October officially hit stores in the United States: Hell in a Cell 2018 — today, WrestlingDVDNetwork.com brings you some exclusive photos. 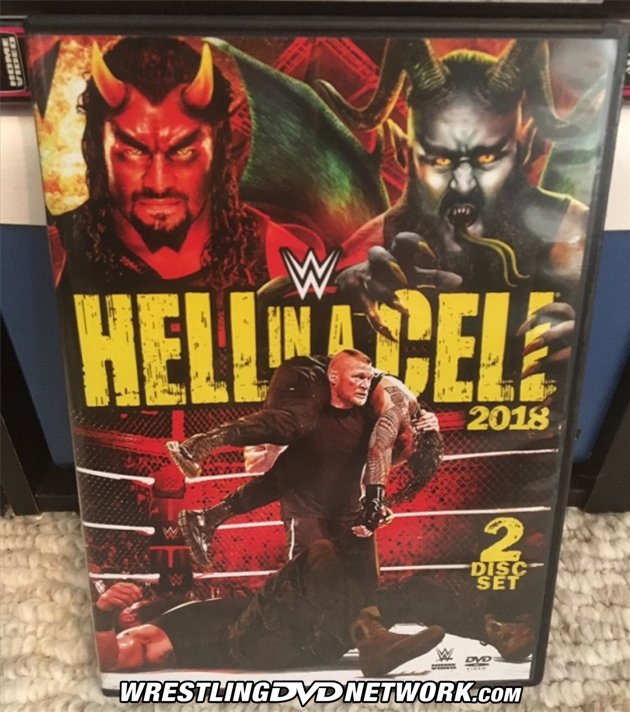 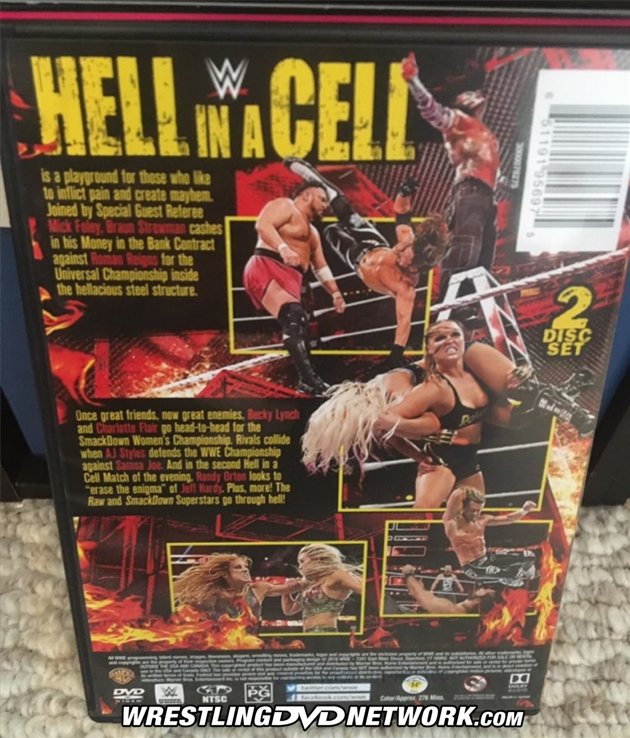 Represented on the spooky-looking cover artwork — apt for this time of year — are Roman Reigns, Braun Strowman and Brock Lesnar. Reigns and Strowman battled inside Hell in a Cell (interrupted by Lesnar) which topped a card featuring matches the likes of: Jeff Hardy vs. Randy Orton in the Hell in a Cell, Charlotte Flair vs. Becky Lynch for the SmackDown Women’s title, Alexa Bliss vs. Ronda Rousey for the RAW Women’s title, Daniel Bryan and Brie Bella vs. The Miz and Maryse, and more!

The new Hell in a Cell 2018 DVD presents the entire 3.5-hour PPV event and 6 bonus features.

Special thanks to WDN reader Matthew Tremble for sending in the pics. 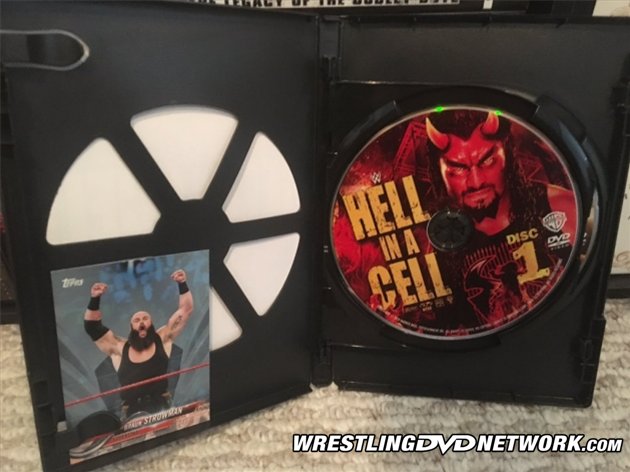 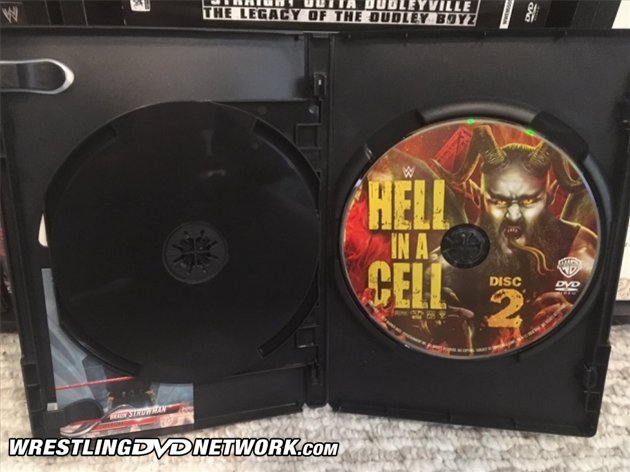 Hell in a Cell is a playground for those who like to inflict pain and create mayhem. Joined by Special Guest Referee Mick Foley, Braun Strowman cashes in his Money in the Bank Contract against Roman Reigns for the Universal Championship inside the hellacious steel structure.

Once great friends, now enemies, Becky Lynch and Charlotte Flair go head-to-head for the SmackDown Women’s Championship. Rivals collide when AJ Styles defends the WWE Championship against Samoa Joe. And in the second Hell in a Cell Match of the evening, Randy Orton looks to “erase the enigma” of Jeff Hardy. Plus, more!

The RAW and SmackDown Superstars go through hell!

The Kickoff Show match for the SmackDown Tag Team titles is included here in the extras, plus 5 segments that aired on RAW and SmackDown Live episodes before Hell in a Cell – full list.

If that wasn’t enough all first-run copies include a trading card of Braun Strowman! 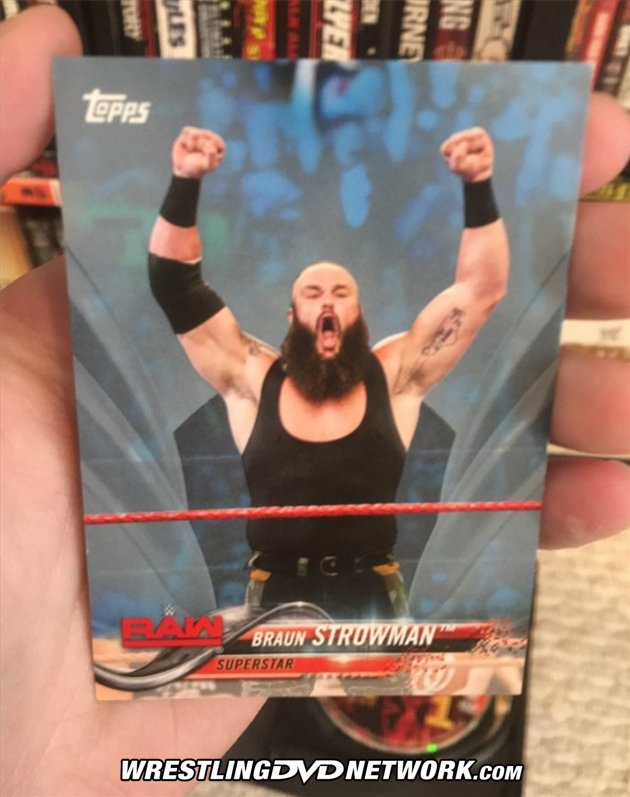 – United States: RIGHT NOW! Get your copy of the HIAC 2018 DVD here on Amazon.com. 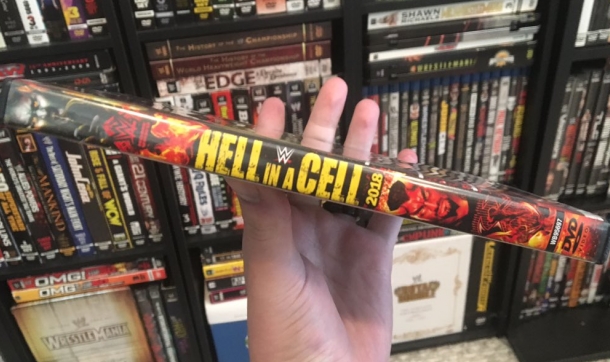 Before the Hell in a Cell DVD came SummerSlam 2018 but in the UK this event has just this month been released as an exclusive Blu-ray in addition to the DVD. So let’s take a look! 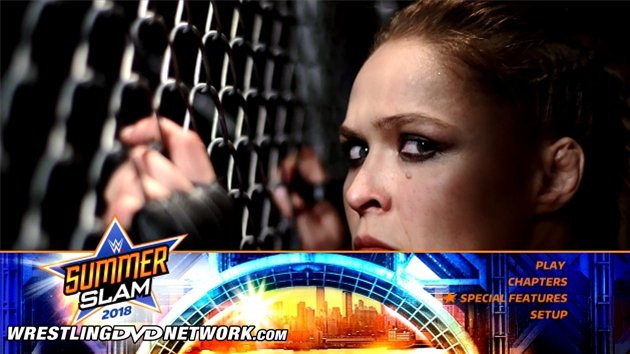 The year goes fast in WWE. It wasn’t that long ago that we were discussing RAW’s 25th anniversary, Ronda Rousey arriving at the Royal Rumble, or Brock Lesnar shockingly beating Roman Reigns at WrestleMania 34. Yet we’re already heading towards the final few months of 2018, and that means the DVD release of SummerSlam, the last and biggest PPV event of WWE’s summer season.

On paper, this event had the potential to both thrill and frustrate. Several matches booked for the card seemed certain to deliver fireworks, but the potential results of other contests were almost guaranteed to cause further fan resentment. As things turned out, though, there were more positives than negatives, all of which make this SummerSlam a very enjoyable show to relive.

Let’s dissect the card as a whole, match-by-match, with a look at the Blu-ray edition.

Though it takes a few minutes to really get going, this opening bout builds and progresses into an absolute thriller, with some great false finishes and high spots prior to Rollins gaining the pinfall victory. I personally feel that Seth has had better matches this year, but this was still further evidence that Rollins has been WWE’s best in-ring worker of 2018. 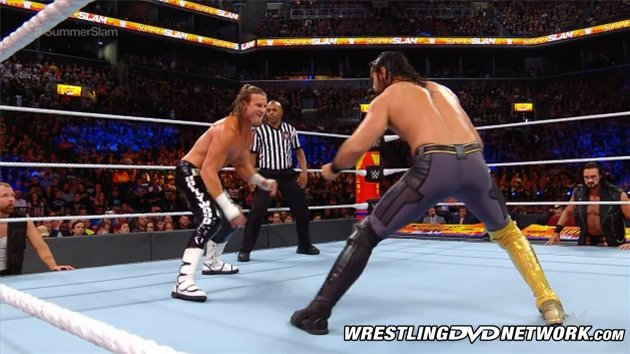 This was going better than I had expected, considering that The Bludgeons had largely served up squash-like victories and/or disappointing bouts prior to SummerSlam. But the DQ finish spoils things a bit, and whilst it did set up New Day capturing the titles two nights later (partly because Rowan was about to go on the shelf), it ends up being something that you could easily skip.

Money In The Bank Briefcase Is On The Line
Braun Strowman vs. Kevin Owens

One of the intriguing factors heading into this show concerned whether Kevin Owens would take control of Braun Strowman’s Money in the Bank briefcase. Well, this one-sided victory for The Monster Among Men answered that question definitively. I’m not sure why KO has lost so many matches since WrestleMania and his subsequent move to RAW, but this was arguably the most damaging, even if it did reaffirm Strowman’s status as a destroyer. 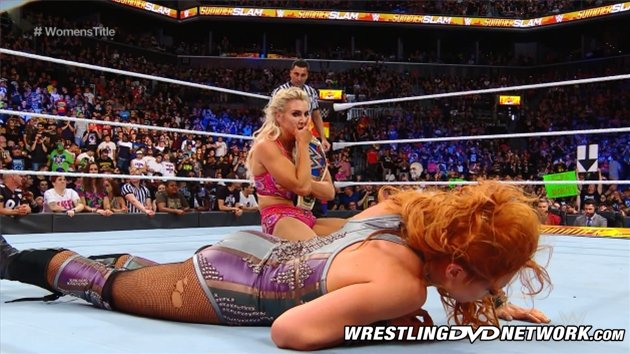 This was better than I had anticipated, partly because Carmella puts on a strong performance to prove that she can hang with Charlotte and Becky – ironically, on the night that she would lose the title, with Flair pinning Lynch. But the big story comes after the bout, where Becky turns heel on Charlotte; fans react as if she had been a villain turning babyface, since they were so fervently behind Becky’s struggle to regain the SmackDown Women’s Championship. Even if the reactions are the opposite of what WWE desired, this angle kick-started what is currently one of the company’s hottest feuds.

This was expected to be a great WWE Championship contest, and though we get another DQ ending, I feel that it lived up to the hype. There is real intensity, due to Joe bringing AJ’s family up on multiple occasions, and when he tries to make a move on AJ’s wife Wendy at ringside, a bloody Styles snaps and destroys Joe. As the first stage of a big rivalry, this works very well, though I can understand some people feeling a bit let down at the conclusion. 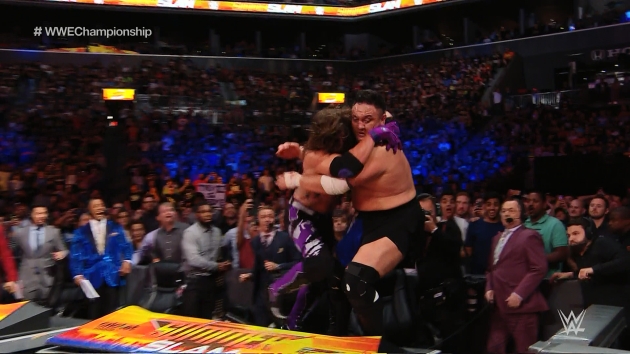 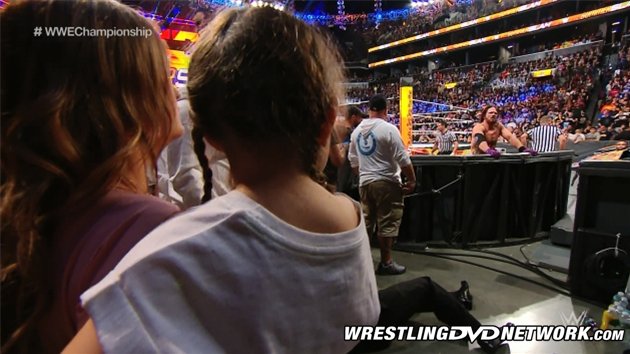 Daniel Bryan vs. The Miz

Hmm. The Brooklyn crowd didn’t seem to be as invested into this match as one would expect, and there was a fair bit of criticism online about the action. But I thought it was an enjoyable contest, and a change of pace from AJ vs. Joe. Just like that match, though, this was clearly designed to be chapter one of an extended feud, which meant it was no surprise when Miz used brass knuckles (handed to him by Maryse) to steal the victory.

The Demon character makes a surprise appearance here, and Constable Corbin sells it as if it were The Undertaker himself who had turned up at the Barclays Center. It’s easy to see why, as the Demon-painted Bálor destroys Corbin in short order. Had this been a straight match, it could have been relegated to the Kickoff Show, but with the Demon on hand, it’s a fun moment to see. 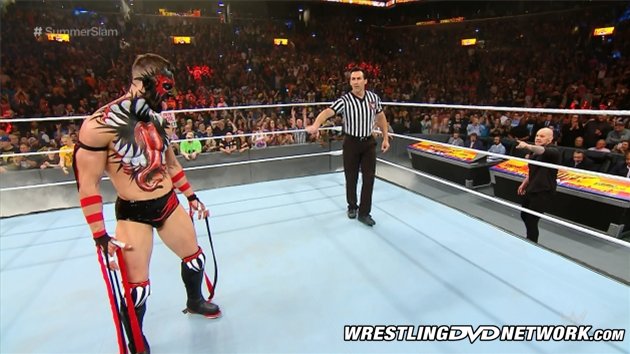 This match will be remembered for one thing only: an absolutely brutal-looking Swanton Bomb attempt onto the ring apron by Hardy after Nakamura moved out of the way. Shinsuke quickly seals the win with a Kinshasa, and though Randy Orton comes down after the bell, he decides to take pity and not attack Jeff, who was lucky not to break his back with that insane bump.

For the third time in the evening, we have a one-sided victory, though it’s understandable as to why former UFC bad-ass Ronda Rousey would have no problem taking care of Alexa Bliss pretty quickly. But the upshot is an instantly forgettable battle, and the post-match celebration involving The Bella Twins was unnecessary, even if it was to plant the seeds for a future storyline. 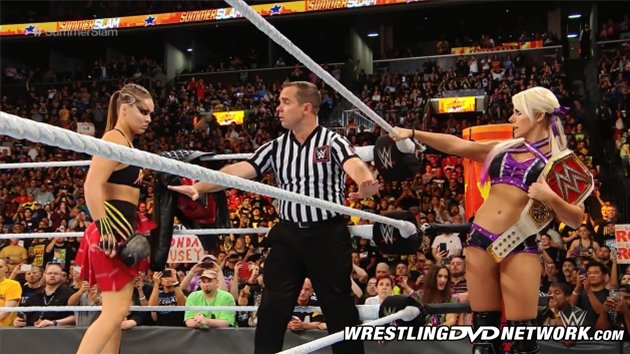 I thought the booking of this match was brilliant, considering the likelihood that the Brooklyn crowd were going to hijack the bout. Braun Strowman promised a post-match MITB cash-in, but a Lesnar beat-down prevented such a possibility, which led to Roman (who had started with a quick-fire flurry that could have seen him claim victory within seconds) Spearing Brock once more to win the Universal Championship. Whether you approve of Reigns as RAW’s top titleholder or not, WWE could not have laid this match out any better. 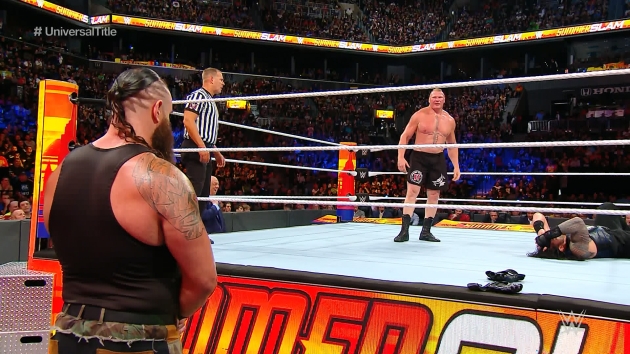 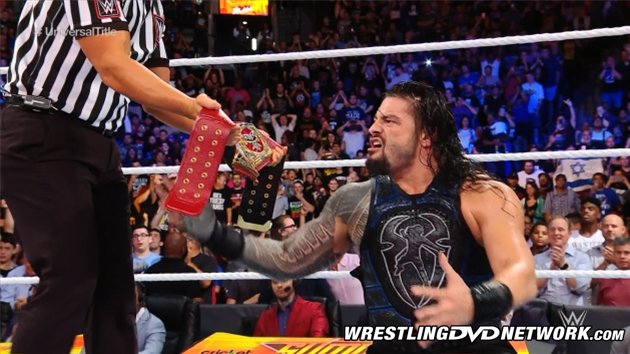 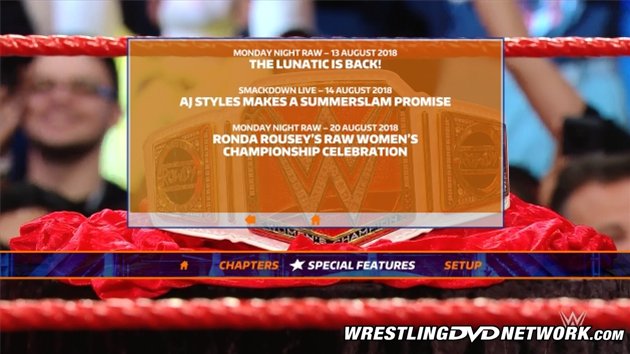 We’re treated to three segments (involving Dean Ambrose, AJ Styles and Ronda Rousey) from RAW and SmackDown episodes leading into the PPV, in addition to all three matches from SummerSlam’s Kickoff Show:

This is fun to see, but not essential viewing. Almas and Vega have become a highlight of SmackDown since being promoted from NXT, and though time is not on their side here, they put on a decent showing of their skills here, prior to an unfortunately messy finish.

This is a tremendous Cruiserweight Championship battle. Cedric Alexander’s title reign was under threat of ending here, but whilst Drew Gulak couldn’t capture the gold (well, silver), both champion and challenger deliver a superb encounter that has fans chanting “This is awesome!” This is well worth checking out. 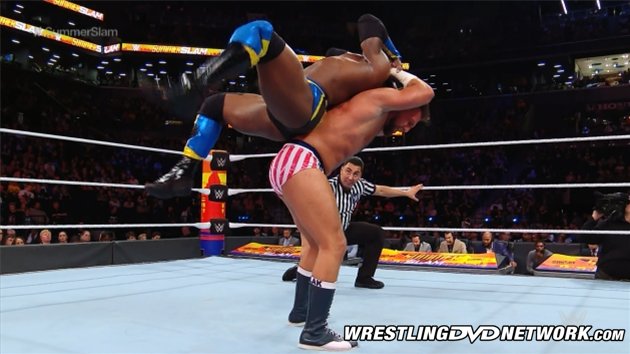 Unlike this bout, which may as well have not happened. The B-Team are mildly amusing, but on a stage like this, they seemed out of place as titleholders, and fans of The Revival will have been disappointed to see them lose again here to Bo Dallas and Curtis Axel.

SummerSlam definitely surpasses expectations. One could argue that it’s not a great show considering that only three of the bouts are really good, and three others are near-squashes. But in the era of four-hour PPVs where down-times are a necessity, SummerSlam is as strong a card as one could expect.

Rollins-Ziggler is excellent, AJ-Joe and Bryan-Miz are very good, we get surprises (such as the Becky Lynch attitude change and the return of The Demon), and big title victories for Ronda and Roman, with the latter having a very well-crafted battle with the allegedly-outgoing Lesnar. Other battles shine as well (especially Alexander vs. Gulak), and the crowd is hot for most of the action, with any moments of “hijacking” at a minimum.

It’s hardly a contender for Best PPV Ever, but SummerSlam 2018 is currently my pick for the best WWE supershow of the year so far, and therefore I’d suggest watching it again, especially on Blu-ray.