Photos of WWE’s New ROYAL RUMBLE 2019 DVD Out This Week, Will CROWN JEWEL Ever Be Released?

Picked it up yet? We’re talking about the new Royal Rumble 2019 DVD, of course!

The latest WWE DVD release is a 2-disc set as this week the Rumble DVD officially landed in the United States ($14.99; Amazon.com) and is scheduled to hit the United Kingdom in less than 2 weeks on both DVD and Blu-ray formats (£16.50; Amazon.co.uk). 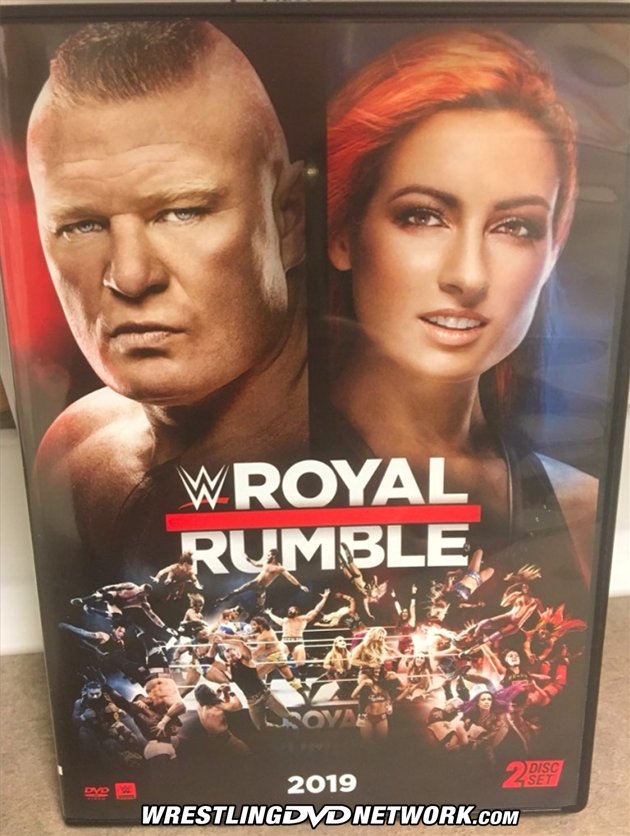 The Royal Rumble 2019 cover artwork is a modified version of the Pay-Per-View poster – featured front and center is “The Man” Becky Lynch and the Universal Champion Brock Lesnar.

Becky would win the Women’s Royal Rumble on this night, while Brock successfully defended his title against Finn Bálor. The show saw a WWE Championship contest between Daniel Bryan and AJ Styles, RAW Women’s Champion Ronda Rousey in action against Sasha Banks, and not forgetting Seth Rollins’ Rumble moment when he won the traditional 30-Man Royal Rumble Match.

The newly-released Rumble DVD presents the PPV event that ran over 4 hours and a selection of extras too. Let’s see how it’s going to look on our shelves with these new pics sent in by WDN reader Matthew Tremble. 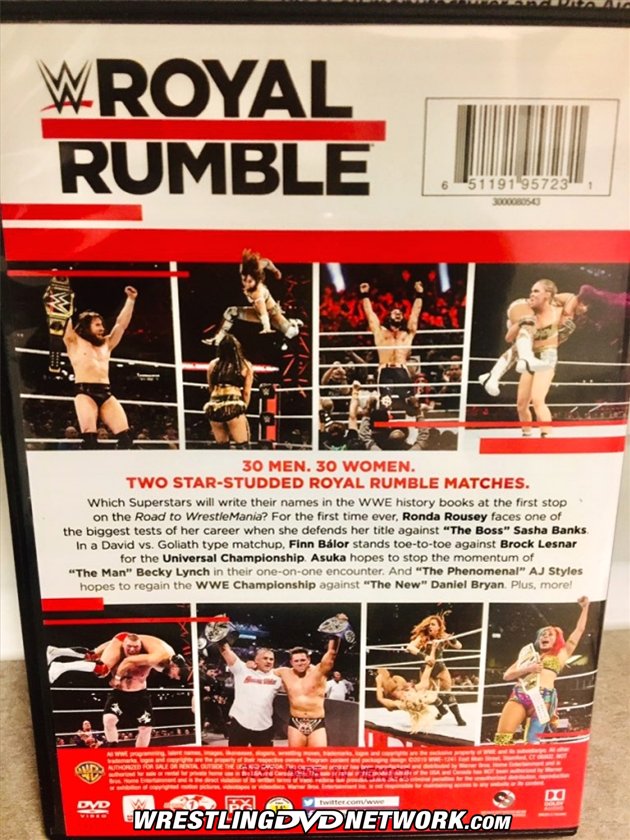 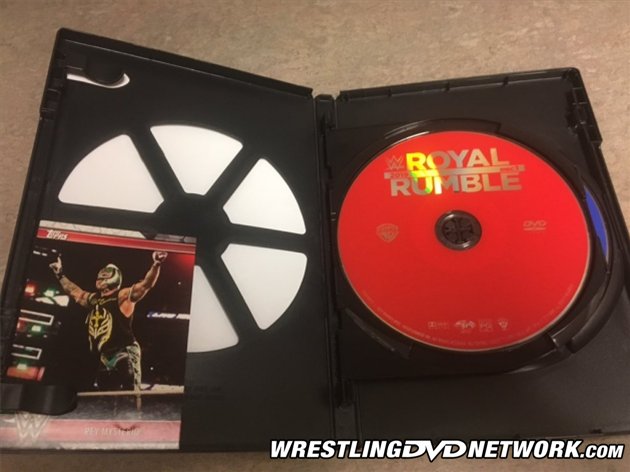 The extras are all three matches from the Kickoff Show leading into the PPV. There’s also a free Topps trading card found inside the packaging and this one features Rey Mysterio! 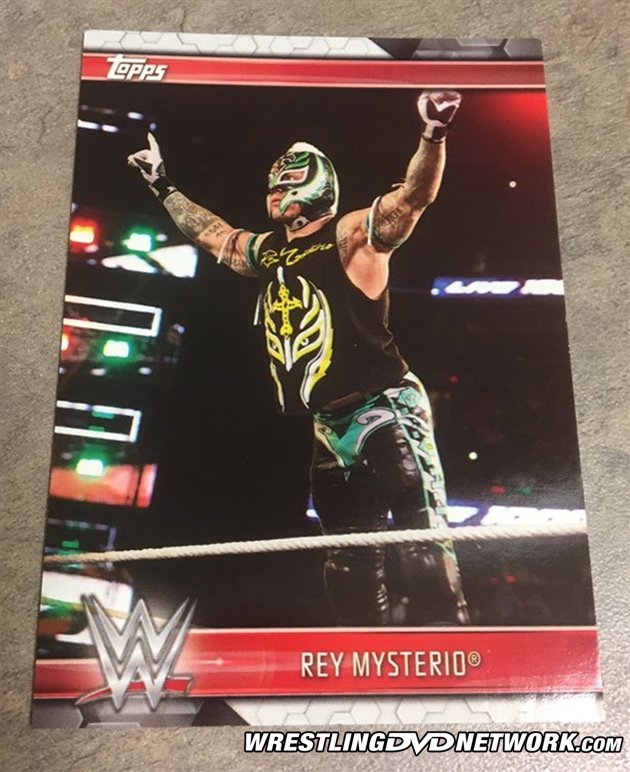 – United States: NOW! Get your copy of the Rumble 2019 DVD here on Amazon.com. 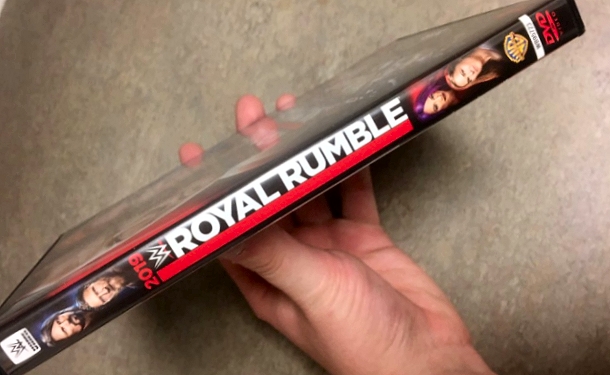 With the Rumble DVD in stores now, the next anticipated WWE Home Video release will be “Best of NXT TakeOver 2018” later this month (see the upcoming WWE DVD Release Dates).

The next Pay-Per-View DVD will be Elimination Chamber 2019 on April 2nd.

We’ve received some new shots of the box artwork for the U.S. version of Elimination Chamber which you can check out below – front and back. It was Rey Mysterio earlier but for the next WWE PPV DVD it will be Alexa Bliss featured on a trading card. 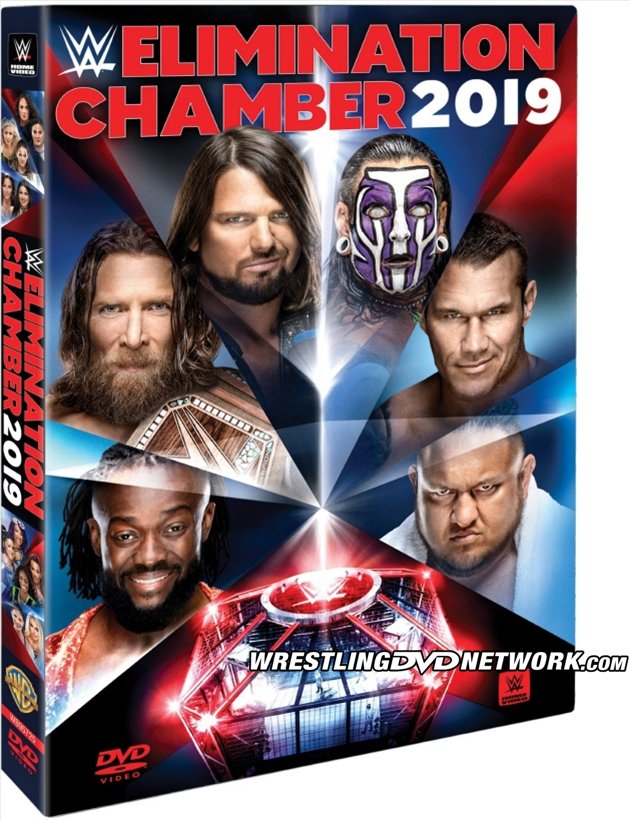 Once the door is locked to the Elimination Chamber, the mayhem begins…

The first-ever WWE Women’s Tag Team Champions will be crowned when The IIconics, The Boss n’ Hug Connection, Carmella an Naomi, Nia Jax and Tamina, Mandy Rose and Sonya Deville, and The Riott Squad go head-to-head inside the Elimination Chamber.

Finn Bálor faces the numbers game when he battles Bobby Lashley and Lio Rush in a Handicap Match for the Intercontinental Championship. WWE RAW Women’s Champion Ronda Rousey tries to keep her championship reign alive against the leader of The Riott Squad, Ruby Riott. In the second Elimination Chamber Match of the evening, Daniel Bryan defends the WWE Championship against Kofi Kingston, Randy Orton, Samoa Joe, Jeff Hardy and AJ Styles. Plus, more!

Who will survive the Elimination Chamber on the Road to WrestleMania? 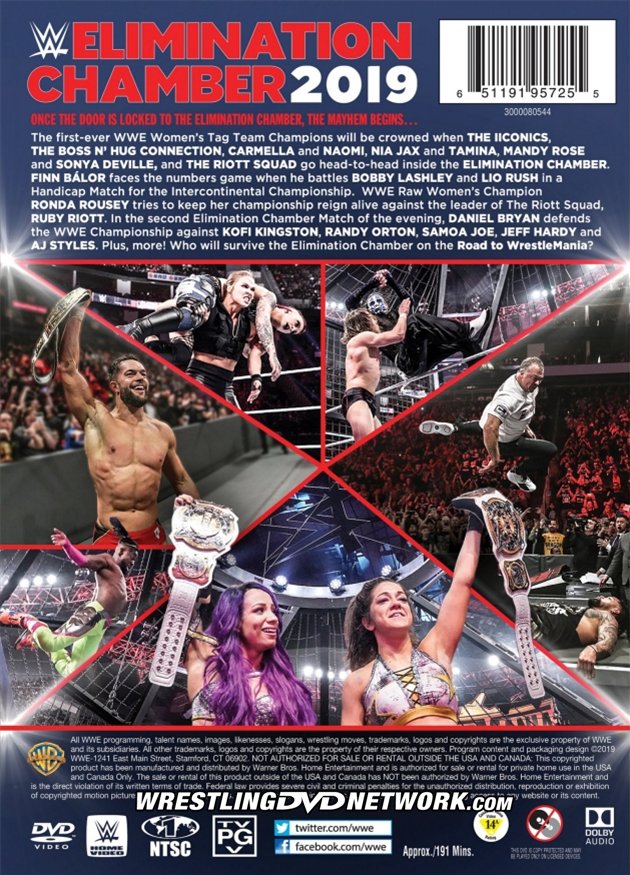 Speaking of PPVs, will WWE ever release Crown Jewel on Home Video?

Back in October all signs pointed to there being a physical release of the event in early 2019 but plans look to have been scrapped. WWE Home Video UK have confirmed both to us and to their customers that they will not be offering the product and one would assume that’s the case worldwide.

There’s no official word on why, but it would seem plausible it’s related to sensitivity reasons around Saudi Arabia. Unless something changes we won’t be adding Shawn Michaels’ in-ring return to our DVD collections any time soon. 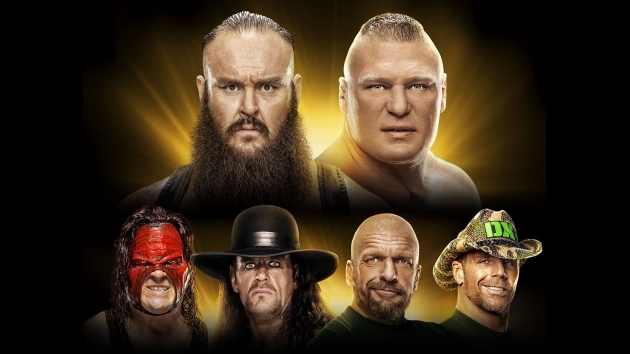 RARE STUFF: Rarity collectors, go check out eBay seller “storagequeen1973” who tonight is auctioning off a FACTORY SEALED copy of the hard to find and sought after Judgment Day 2002 DVD in its original U.S. version. This is demanding some big bucks!

This seller has also got hold of several other WWF/WWE DVDs in factory sealed condition – some may never be seen again still sealed, so take a look now before they disappear in a few hours. 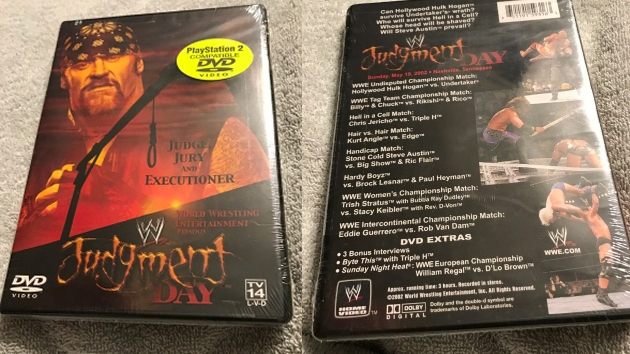