This one is a SHOWSTOPPER!

October’s WWE DVD titles just kicked off with “Shawn Michaels – The Showstopper Unreleased” which hits stores today across the United States ($17.89; Amazon.com) and landed yesterday in the United Kingdom (£24.99; Amazon.co.uk).

On the official release day WrestlingDVDNetwork.com has your first look photos of the final product. And if you particularly like the cover artwork WWE went with here, you can own the 3-disc DVD set with a bonus poster of that artwork, available exclusively through WWEDVD.co.uk. 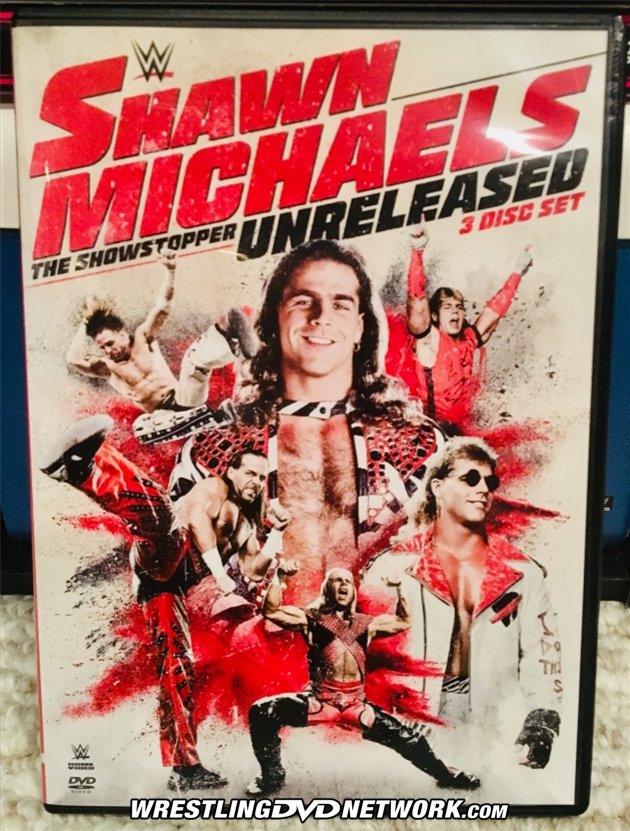 Unreleased no more! Today’s “Shawn Michaels – The Showstopper Unreleased” DVD digs deep into the vault to unearth more than 30 Shawn Michaels matches that have never seen the light of day on Home Video – or in many cases never seen the light of day period – before now. On top of those are a few non-match segments, lots of recent backstage footage of HBK working with the NXT stars, and of course a brand new interview with Shawn that’s also exclusive to this Home Video.

We’re talking hours and hours of rare content that spans HBK’s entire career, with the selections beginning in 1985 and running all the way through to 2009 — footage from Mid-South Wrestling, early tag matches featuring The Rockers, matches in which he teamed up with Bret Hart and The Undertaker, unseen D-X action from the Attitude Era, battles with legends the likes of Stone Cold Steve Austin, Ric Flair, Jake “The Snake” Roberts, Mr. Perfect, Vader, Yokozuna, Chris Jericho and Kurt Angle, and even a non-televised Piper’s Pit in which Shawn was the special guest!

The U.S. release pictured in today’s update comes packaged in the now-standard, slimmer Amaray style case with a double-sided paper insert found inside which details the full content of all three discs. Those discs themselves are once again ‘stacked’ together in one holder.

A special thanks to WDN reader Matthew Tremble for swiftly sharing these pics. 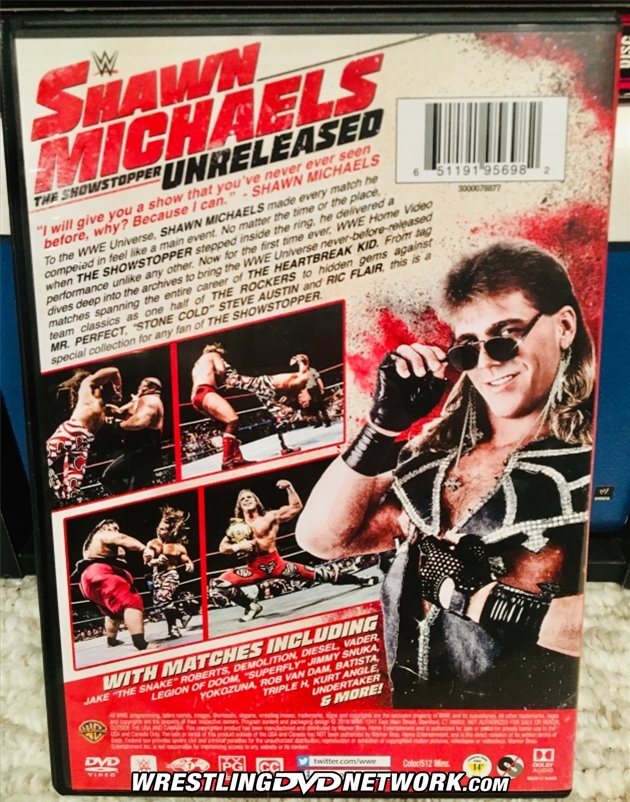 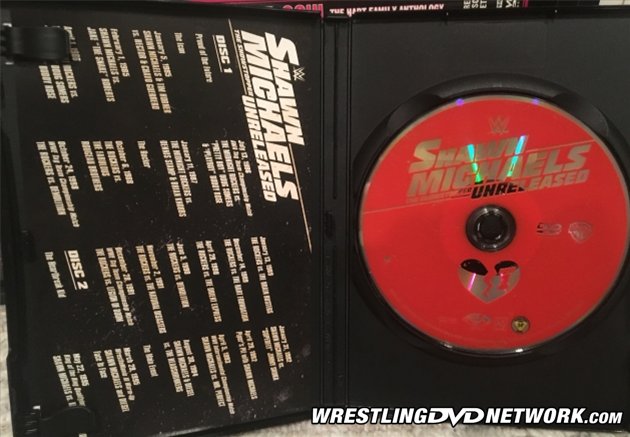 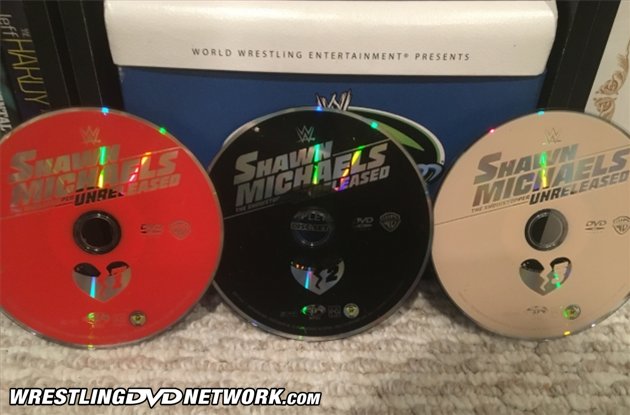 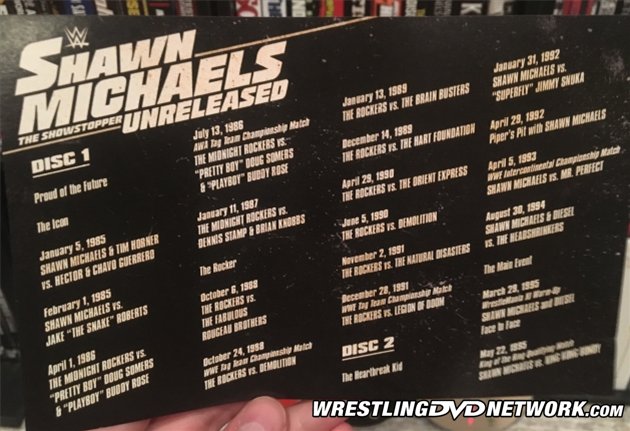 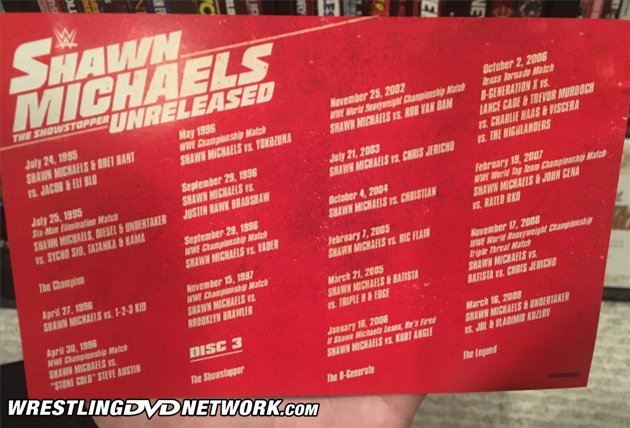 – UK/Europe: RIGHT NOW! Get the HBK Unreleased DVD over on Amazon.co.uk. 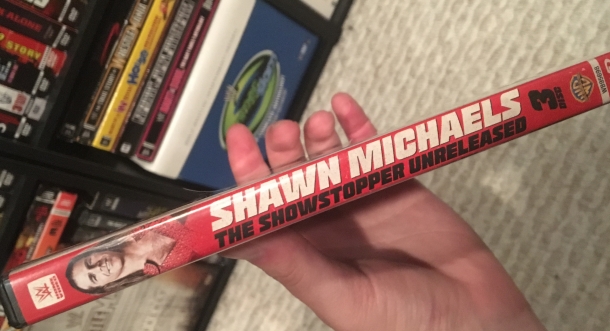 WWESHOP DEAL: The DVD and Blu-ray section of WWEShop.com has been whittled down to just 3 titles left in stock — but right now you can still find a helluva deal there.

You grab the “NXT: From Secret to Sensation” DVD – 3 discs featuring a countdown of the greatest NXT Superstars and a collection of 18 matches – for just $4.95! 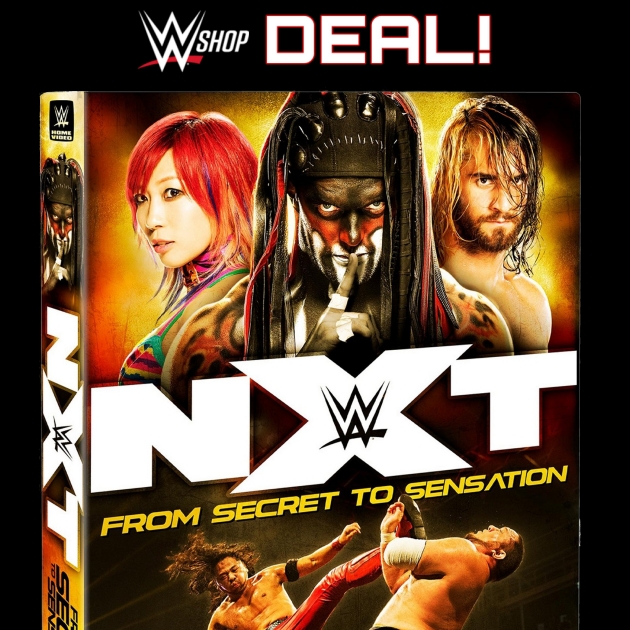 CLEARANCE SALE: Grab a deal on WWE DVDs now at WWEShop.com before they disappear…