Lanny Poffo, brother of the late “Macho Man” Randy Savage, was a guest earlier this month on Another Wrestling Podcast, on which he discussed the upcoming Randy Savage DVD, noting that WWE has included archive interview footage with Randy in the documentary.

“…I don’t know where they found it, I never seen it before, but they had highlights of an interview they did with Randy before, that they did with him in 1993 or 1994 where he was at the fork in the road of his career, and it was like he was narrating his own DVD.”

We can confirm that the interview is from 1993 as Lanny Poffo suggested and that it does appear throughout the new “Macho Man: Randy Savage Story” documentary.

Today’s “Video Week” entry is the last we have for you, but it offers an exclusive, short preview of that aforementioned Randy Savage interview. The clip and a screenshot follow below.

WWE will release the new DVD/Blu-ray next month. Right now, it’s scheduled to hit the UK & Europe first on November 17th, soon to be listed for pre-order at WWEDVD.co.uk. 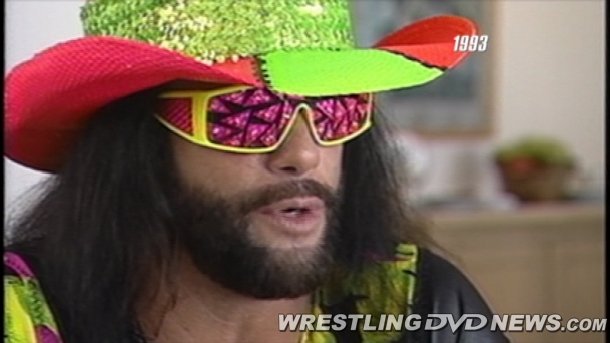 Today here at WWEShop.com you can get 25% off any WWE DVD or Blu-ray title (or any other line of merchandise) by using promo code “SAVE25” at checkout.

That’s running today only and will expire at 11:59pm EST. Take advantage!

A new offer is underway for fans in the UK and Europe. Using promo code “LETSGOCENA” gets you £5 off “The John Cena Experience” DVD when bought with any other DVD.

That’s available this weekend only ahead of the new “John Cena: Greatest Rivalries” DVD releasing to UK fans on Monday – go to WWEDVD.co.uk to take advantage!

The UK site also has a “Flashback Friday” offer running (today only) which is the recent WWE Factions DVD for only £12.99 on DVD and only £14.99 on Blu-ray.

Four lots/box sets to look out for, expiring today on eBay.com. This lot of 7 WWE DVDs ($7.50) includes the collectible WWF WrestleMania 15 and Royal Rumble 2000 DVDs.

This one has the FYE store exclusive Hell in a Cell box set with Undertaker bust and a few wrestling themed books ($14.99). This lot of 5 DVDs has the out-of-print “Chris Benoit: Hard Knocks” DVD and 4 other WWE/TNA DVD titles along with it ($19.99).

This auction ($56.00) contains the SummerSlam Anthology box set (sealed) and the individual SummerSlam 2010-2013 DVDs too, also brand new and sealed.