Here’s an idea of what you can expect to see in the documentary portion of nWo: The Revolution, which hits stores on November 6th (pre-order it). Thanks to Sunny Gupta for sending in this fan report.

I finished watching the documentary and it was decent, nothing we didn’t already know from Back and Black and Monday Night War. But i enjoyed it and it just flew by. It was just a little over an hour.

Was very surprised they got Lex Luger and Vince Russo to provide comments. Looks like they were recent because no year was on the top right corner. They did have quite a few archive interviews though. Hogan and Hall’s comments are taken from directly from Back and Black, nothing really new and Bischoff from 2003, which looked to be from Monday Night War. Also Vince’s comments are from 2009 and Jimmy Hart’s from 2005. Billy Kidman, DDP, Booker T, and Dusty Rhodes were also heavily involved.

They also went over the crossover with media and WCW like involving Dennis Rodman, Karl Malone and Jay Leno. Those were mixed from the interviews, some say it was good for business and others like Bill Demott crapped on it.

They briefly went over nWo 2000…and a good portion was provided about Wolfpac, but mostly negative comments saying Wolfpac was the beginning of the downfall for nWo. They went over Finger poke of doom too.

Also Nash admitted the nWo Souled Out ppv was the worst concept coming from Bischoff. Another funny thing was Big Show crapping on him being with Dungeon of Doom.

This is probably no surprise but the WWF scratch logo is shown.

The pic below of the Blu-ray edition reveals another five Blu-ray exclusive extras that were not previously announced in the nWo Revolution DVD content listing. All of these look to be WCW “paid for by the nWo” vignettes aired in 1997-1999. 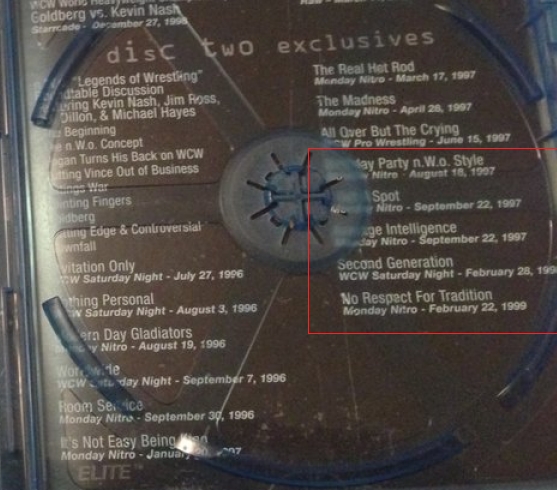 nWo: The Revolution is available to pre-order now for November 6th release to the United States at Amazon.com and WWEShop.com. It’s also shipping out to fans in the UK and Europe within the next few weeks when buying now at Silvervision.co.uk.