REVIEW: ‘Back to the Territories: Amarillo’ DVD – With Jim Cornette & Terry Funk 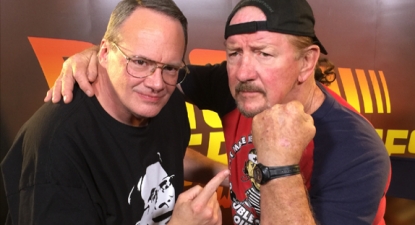 It’s time to grab your plutonium, or a few handfuls of trash if you have the “Mr. Fusion Home Energy Reactor” (show off), power up the flux capacitor and take another trip “Back to the Territories”.

If you’re new to the series, “Back to the Territories” is Kayfabe Commentaries‘ unique historical shoot interview series that examines the life and legacy of some of wrestling’s greatest territories. In each edition series host, and Kayfabe’s resident professor, Jim Cornette is joined by a territory legend to discuss the angles, stars, and stories that put the territory on the map. For the seventh edition Jim Cornette is joined by Terry Funk to discuss all things West Texas wrestling, the Funk family, and the legendary, influential Amarillo territory in “Back to the Territories: Amarillo”. 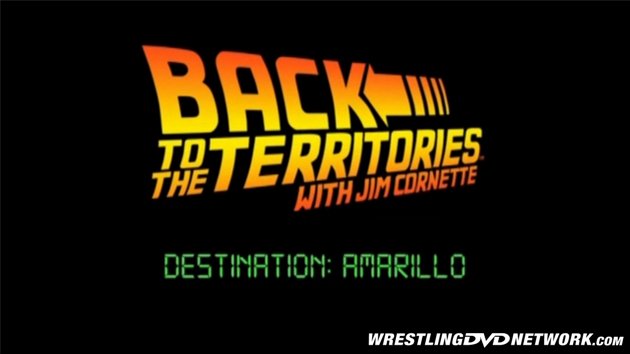 Anyone who knows me knows that I love Terry Funk and have done for nearly 30 years. The man can do no wrong in my book. So it goes without saying that I was excited for this DVD. And I was not disappointed. While this is a worthy addition to the series, it isn’t your typical “Back to the Territories”, as we’ll find out now…

While the interview covers the usual ground for the territory, how Dory Funk Sr. came to Amarillo, the schedule, and some of the top stars, there is a lot, unfortunately, left unsaid. Though we get a lot of history, including the origins of the AJPW/Amarillo union, we don’t get a cohesive story of the territory in terms of dates or years. For instance, Terry talks in detail about the events surrounding the passing of his father, but we don’t hear a thing about when it happened (June 3, 1973). Too often the narrative jumps around from year to year and decade to decade without structure to the interview. Cornette does his best to keep Terry and the interview focused, but it’s a fool’s errand for the most part. If you’re new to the Amarillo territory you’ll need to do some homework. 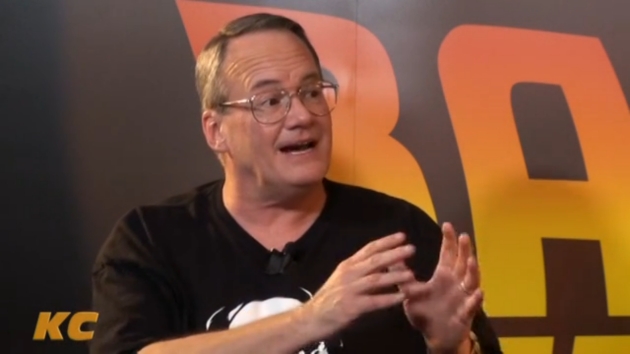 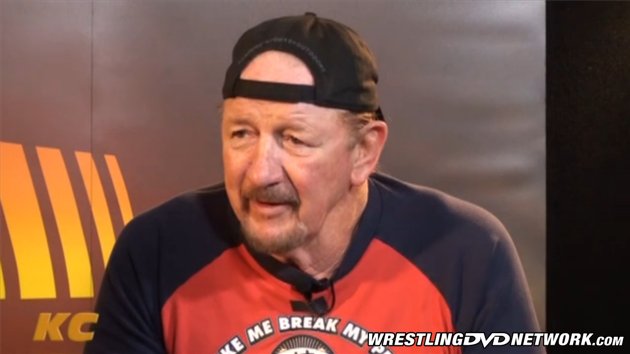 We hear about Adam Funk, Dory Sr.’s father, a law enforcement officer in Hammond, Indiana with 11 kills in the line of duty; Dory Sr.’s exceptional amateur wrestling accomplishments in high school and with Indiana State University; and how Dory Sr. broke into the business in Fred Kohler’s Chicago territory; but when it comes to the early years in Amarillo, or what was there before Dory, we don’t really get too much of anything substantial.

Where other “Back to the Territories” break down the stars by decade and offer insight into the angles and matches that kept the territory hot for so long, “Amarillo” offers very little in the way of details about how Dory Sr. kept such an isolated and sparsely populated territory going, aside from the “Texas Death Match”, which Dory Sr. is credited with creating. In terms of stars, we hear about characters like Killer Karl Kox, Pepper Gomez, Cyclone Negro, Gordon Nelson, Ray Stevens, Ricky Romero, Dr. Jerry Graham, and a few others, but we don’t hear exactly why they were so important to the territory or even about the most minor of programs. In fact, outside of two legendary “Texas Death” matches involving Dory Sr. (against Mike DiBiase and Cyclone Negro), we hear nothing about the big matches and angles that kept fans coming back for more. 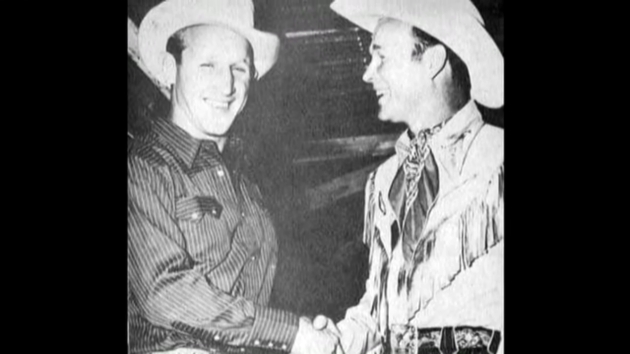 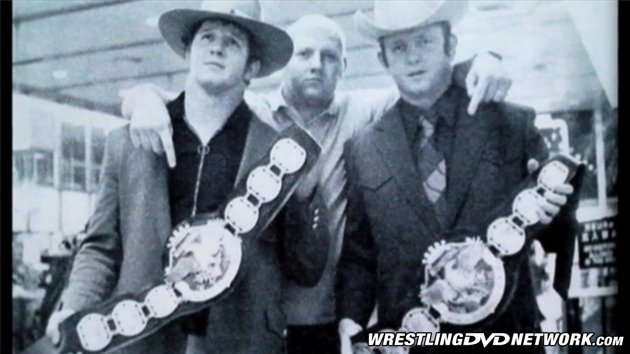 Though this isn’t the usual “Back to the Territories”, that doesn’t mean it’s bad; far from it. What this lacks in information regarding the Amarillo territory it makes up for with insight into the Funk family, their philosophy of the business, and a slew of unique stories and memories that only Terry Funk could tell, including a mid-flight altercation with NWF promoter Pedro Martinez that involved hydrocele and an $18 million dollar lawsuit; Dr. Jerry Graham stealing the body of his recently deceased mother from the hospital; a classic Dory Sr. rib involving Benny Trudel mooning a hitchhiker; and the veterinarian excuse Terry Funk used to get out of being humiliated at the 1993 Survivor Series, to name but a few gems to be found in this DVD.

Perhaps the interview may have been a bit more focused had it not begun at 1:30 in the morning. The time of night and both men being tired is a recurring theme throughout the interview with both guys getting, in the words of Jim Cornette, “slappy”. As a result the conversation routinely breaks down into a BS session where the two friends share competing stories and cut each other up. And while some of the stories have absolutely nothing to do with Amarillo wrestling, they are entertaining and enlightening enough to not completely derail the interview.

At 2 hours and 13 minutes there may be no new revelations about Amarillo wrestling here but there are more than a few truly profound and worthwhile moments. Chief among them is the discussion about the role of “suspension of disbelief”, which Terry Funk believes is a lost art not just for fans but the performers as well, and the Funker lifting the curtain on what it was like to be the son and brother of wrestling legends, providing intimate memories and recollections of a time long gone. For me, the greatest thing about this interview is listening to Terry Funk, at 72, reflect on his life in wrestling and expressing his deep love for this zany profession. 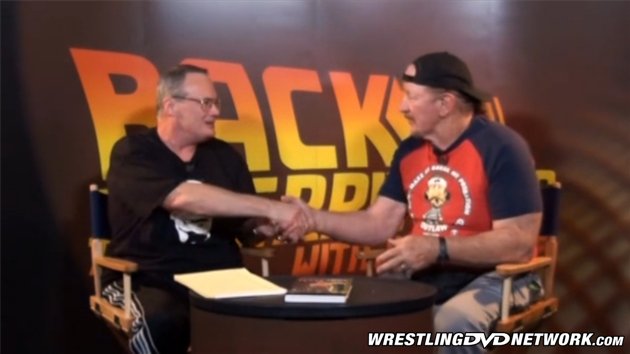 If you love the man as I do, “Back to the Territories: Amarillo” is, frankly, must-own material. Filmed prior to Funk’s recent health scares, during June’s “Legends of the Ring Fan Fest” in New Jersey, this is a classic Terry Funk shoot interview that will make you laugh, make you think, and maybe even bring a tear to your eye.

Grab a copy of “Back to the Territories: Amarillo” at KayfabeCommentaries.com. 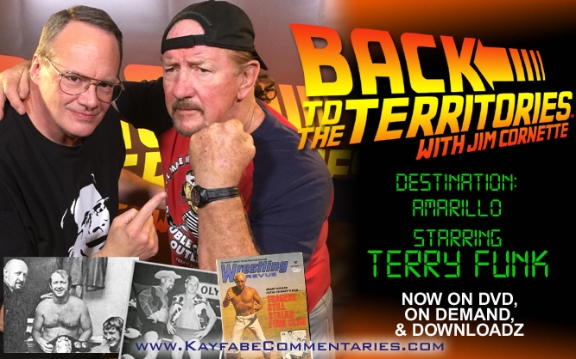