Bret Hart was never a wrestler that immediately came to mind as one of my favorites, but when I really think about it, I can’t deny the fact that he is one of the greatest ever.  He’s been in so many great matches, including my all-time favorite (Bret Vs. Owen, WrestleMania X).  He’s also been able to work surprisingly well as both a good guy and a bad guy.  The first DVD set about Bret, which was released back in 2005, made my list of Top 10 WWE DVD’s last year, so I was looking forward to this set to serve as a nice complement.  That’s exactly what we got here.  The stories from Bret were more interesting than I expected, and we got some great, forgotten matches.  Disc 1 of this Blu-ray runs 4 hours, with 17 minutes of bonus interviews.  Disc 2 runs 3 hours, with 80 minutes of bonus interviews and matches.  The Blu-ray is rated TV-PG.

“Pink and Black Attack”: The Format/Interviews

When the content listing for this release was first unveiled, I was thrilled to see that there would be an intro clip for each match.  I didn’t realize just how in depth they were going to go for the interviews, though.  Bret shares some great stories for each match, and oftentimes gives nice justification for why each particular match is going to be included in the first place.  There were several instances where the comments from Bret did in fact change how I watched the match.  It becomes clear pretty early on that Bret was quite hands on during the creation of this project.  Since the matches span such a large part of Bret’s career, we also get the chance to learn about Bret’s career as a whole pretty nicely.  Of course, this doesn’t serve as a total replacement for the 2005 documentary, but it is a great supplement. 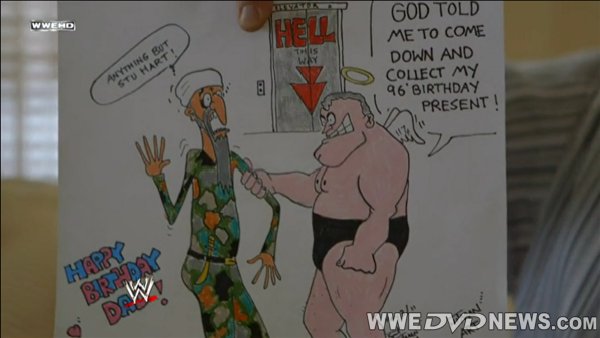 The Blu-ray allows for even more story extras.  Of course, we get to hear intro stories for each of the four Blu-ray exclusive matches.  Some of the extras are stories about wrestlers who didn’t get individual matches on the DVD or Blu-ray, such as Bob Backlund.  We also get some general bonus interviews.  My favorite of these was probably the one where we get to see him working on some of his cartoons.  I always knew that this was a hobby of Bret’s, but I had never gotten to see him in action actually working on a piece.  This was a nice bonus to see.  If you have the opportunity, I would say the Blu-ray is worth the extra money just for these bonus interviews alone.  As you’ll see below, the bonus matches aren’t too bad either, but for me, the interviews are really what made the Blu-ray worthwhile.

“Excellence of Execution”: The Matches 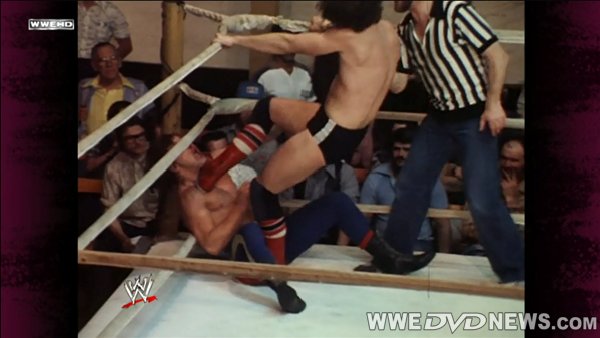 I have decided not to give a traditional star rating since this match is joined in progress.  It is a great match to see on this set, though; two great talents early in their careers. You can see the greatness they will go on to in the match.

This is a fun, short match. The video quality isn’t great, but that’s to be expected for such a rare gem.  A very technically proficient match.

This match is also joined in progress. The storytelling is nicely done here. Bret plays the underdog role well.

This match felt very ahead of its time.  While not using too many modern “highspots”, this felt very much like a match you would see on the independent circuit today.  A technical clinic. 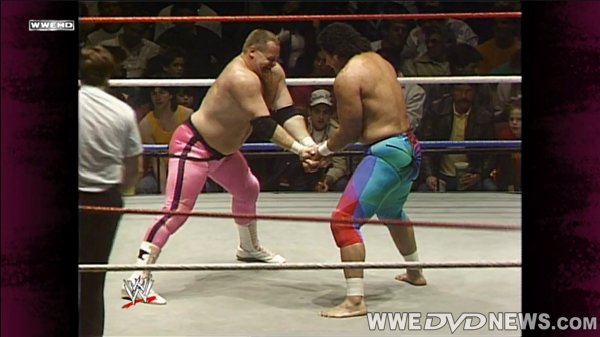 More than anything, this match lets you see how great The Hart Foundation were as heels.  A very well put together story, that can move a little slowly at times. 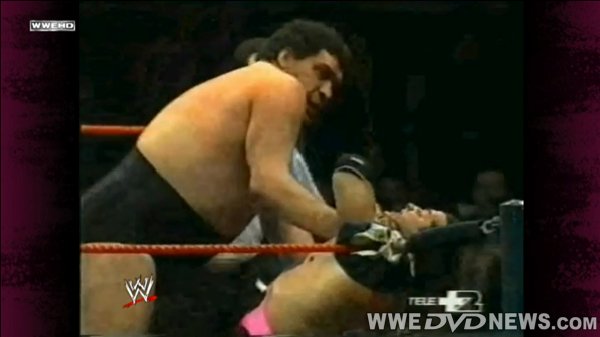 The video quality for this match is very poor, but it still is awesome to see for historical purposes.  Andre wasn’t very agile at all at this point in his career, so the match itself isn’t anything great, but it’s still a nice hidden gem.  Also note that the commentary for this match is in Italian. 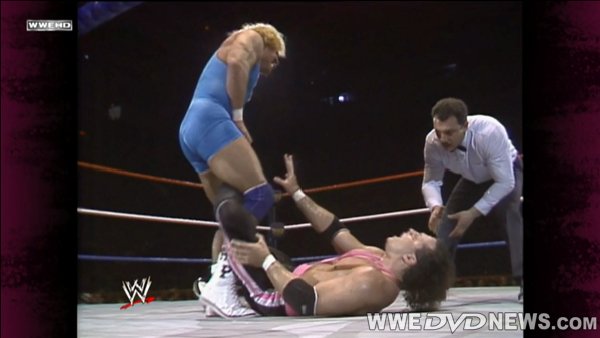 Hart & Perfect worked together really well, and while this match doesn’t reach the levels of their future classics, it still tells a great story.

As Bret points out in the interview, for a match featuring two big men, it is a surprisingly fast paced match.  Nothing too out of the ordinary here, but still fun. 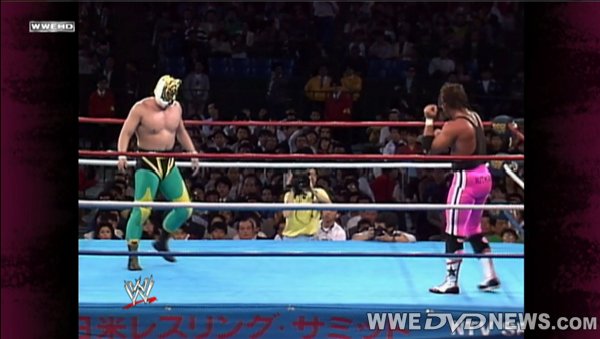 It’s not a big surprise that Bret fit in well with the Japanese style of wrestling.  I never felt like this match really got out of 2nd gear, though, and something didn’t totally click.  This match also has no commentary, which I will admit has always been a struggle for me. 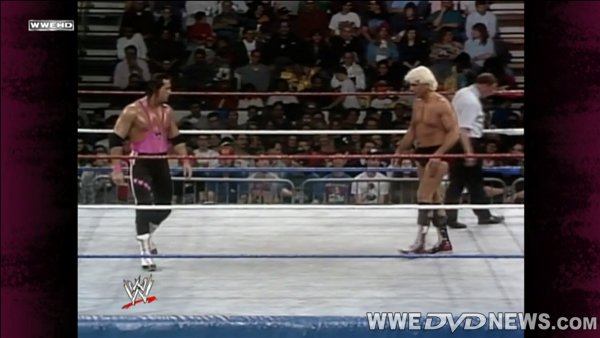 As Bret alludes to in the interview before this match, Bret & Ric never had great chemistry, and I think it shows here.  Of course, they put together a technically solid match, but it never felt like they were on the same page.

Taker was still pretty early into his career at this point, but Bret is able to bring some good out of him.  Of course, Taker would go on to be one of the greatest of all time, but at this point, he was still fairly inexperienced in the ring.  Still, a solid match.

Bret & Bam Bam worked together very well.  This match can be a little slow, but overall, it works quite nicely.  Like the Andre match, this also features Italian commentary.

A surprisingly fun match, considering the fact that Diesel was just a manager only a few months before this match.  This isn’t nearly at the level of the Royal Rumble or Survivor Series 1995 matches, but it’s still great. 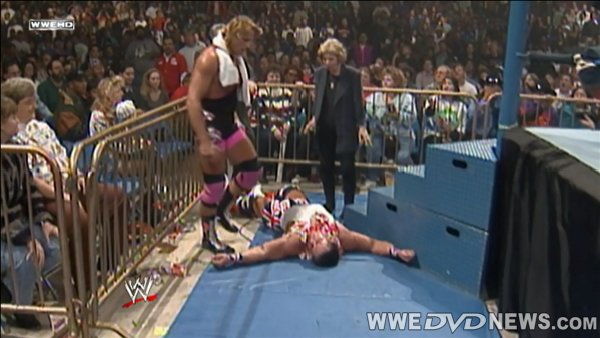 This match doesn’t reach the heights of some of their most famous encounters, but you can’t really go wrong with a Bret Vs. Owen match.  This is probably my favorite all time feud.

I can’t say I was familiar with Jean-Pierre Lafitte before watching this match, but I was definitely impressed.  This is a fun big man vs. little man match, something Bret is great at. 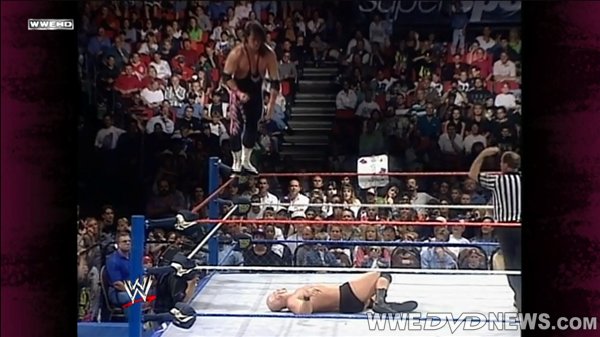 An excellent technical encounter.  A nice “primer” before their WrestleMania classic.

Another solid, technical title match.  The Patriot looks really strong in this match, and heel Bret is always fun to watch.

I was surprised with this match.  For a TV match, it was given a pretty good amount of time.  As Bret mentions in his interview, this was probably one of his better WCW matches.

This match screams “what could have been” to me.  Seeing Bret & Sting wrestle at the prime of their careers would have been great.  At this point, they still put together a decent match, but it isn’t anything special. 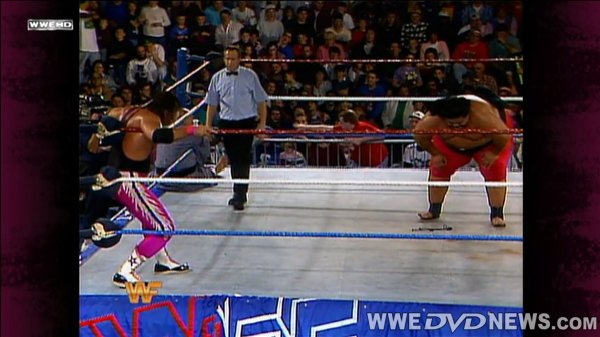 Bret was able to get some pretty good matches out of Yokozuna, but I didn’t think this was one of their best matches.  Still an OK match.

A fun tag team match.  Doesn’t rewrite the book, but still fun to watch given the four men involved.

Another fun TV match, but I can’t say this was anything special.

This match never really has the chance to get going.  It devolves into a multi-man brawl pretty quickly. 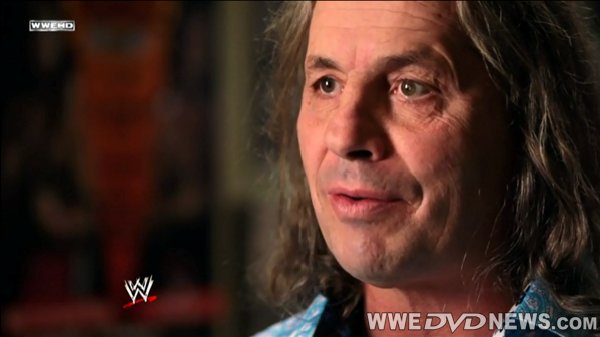 I wouldn’t be surprised if this ends up being one of my top DVD’s of 2013.  Along with the 2005 Bret Hart DVD, they function as a package of the best DVD’s that the WWE may have ever put out.  As you can see from the star rankings, while pretty much every match on year is really good to great, you aren’t getting any of those five-star classics Bret had throughout his career. We’ve seen most of those on other DVD’s, though, and pretty much all of them are featured on the 2005 Hart DVD.  What you do get from this compilation is the feeling that you are watching rare footage.  As much as you would be inclined to complain about some of the grainy quality and weird commentary, it does make this feel like you are watching some hidden treasure that you were only to get through tape trading.  For a collection of matches that have never been released, there is a really high level of quality here, and most importantly, the quality is consistent.  As you may have noticed, my match thoughts got a bit repetitive, and that’s because so many of the matches end up delivering as fun, well told stories.  I will acknowledge that it was strange just how many of these matches ended in time limit draws or other non-finishes, but with so many house show matches, I guess I can understand why the finishes were the way they were.  I had no trouble watching this entire Blu-ray pretty quickly, even though all of the matches featured the same competitor.

If taken all together, the interviews with Bret come across as a mini shoot interview about Bret’s career, and I mean that in the best way possible.  Bret isn’t out to make anyone look bad throughout the interviews.  Bret clearly is pretty content with the way his career has turned out.  He speaks highly of pretty much everyone that he faces in any of these matches.  He even gives Sting credit for creating the Scorpion Deathlock before he came up with the Sharpshooter.  Also, as mentioned above, the interviews are what sets the Blu-ray apart from the DVD.  You get some really nice extra interviews with some great stories.  The bonus matches on the Blu-ray, for the most part, aren’t anything too special, but I did really enjoy that tag team match, which is a nice hidden gem.

Overall, there’s no question that this DVD/Blu-ray is a very high recommendation.  Some of the older matches from the Stampede/Georgia Championship era are definitely of that time period, and fans who aren’t familiar with wrestling of that time period may find them a bit slow.  I think it was a good decision to not include any matches from that era that were too long, though.  They flow pretty well.  Most of the matches that were chosen for the set were given a nice amount of time, and you really can see just how good of storyteller Bret was in the ring.  I hope everyone enjoys this set as much as I did; let me know what you thought in the comments below.