I still remember buying Here Comes the Pain when it came out in 2003.  At the time, the WWE was making a shift towards higher-end documentaries on their DVD’s, and I really enjoyed it when it first came out.  It gave a good overview of Lesnar’s first year in the WWE, and seemed like the best type of documentary we were going to get from the WWE.

In hindsight, this was pretty far from the truth.  While it’s by no means painful to sit through, the documentary doesn’t hold up great when looked at next to the releases we’ve gotten recently (especially with the fact that it has to follow the Punk DVD).  The DVD features the original documentary from 2003, with the bonus matches on discs 2 and 3 interspersed with a new interview from Lesnar.  Disc 1 runs around 1 hour, 10 minutes, and Discs 2 and 3 each run around 3 hours.  The DVD is rated TV-14.  As has been reported here on WWEDVDNews.com in the past, this is the first DVD to feature the WWF scratch logo unedited, which will hopefully be true from here on out.

“Next Big Thing”: The Documentary & Format

As I mentioned in the intro to this review, the documentary, while entertaining, has not aged particularly well.  It serves as a nice trip down memory lane revisiting all of Lesnar’s feuds from his first year in the WWE.  The documentary doesn’t really give us anything more substantive than this, though.  It begins with a brief look at his childhood, and quickly runs down the timeline of Brock’s career through June of 2003.  The format is very simple, but you can see the shift the WWE was making at the time towards more groundbreaking documentaries.  Some of the interviews are told out of character, while some interviews (such as those from Michael Hayes) are told from the point of view of Brock Lesnar, the character.  This dichotomy becomes a bit confusing.  The growing pains of the WWE Home Video department are clear here. 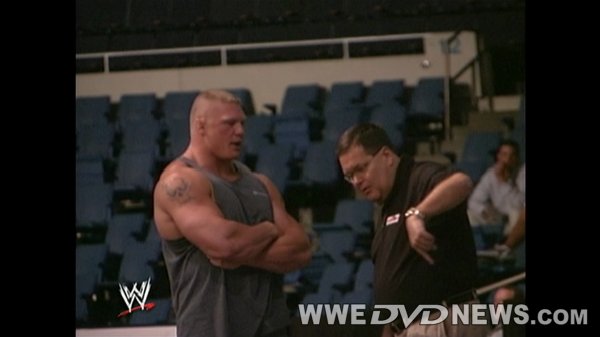 I had forgotten just how prominent feud recap video packages were on these old documentaries.  A lot of time on this doc is made up of video packages like the ones you would see recapping a feud before a PPV match.  When they are well made, they can be a lot of fun to watch.  This isn’t really what we’ve come to expect on DVD’s anymore though.  Some videos recapping a feud is great, but interspersing this with interviews from the different superstars and writers involved is what really makes it interesting.  These are few and far between here.  If you go in with your expectations shifted a bit, you’ll probably enjoy the documentary well enough, but if you expect more, you’re going to be disappointed. 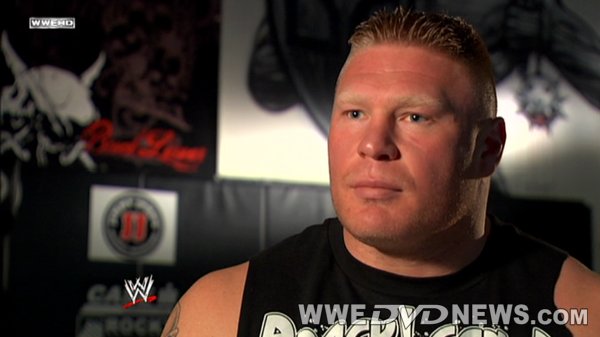 The new interview with Lesnar, which we get a segment of between each match on Discs 2 and 3, is pretty bizarre.  First off, I love the fact that there is an interview between every match.  This is how all match compilations should be set up from the WWE.  Unfortunately, most of the interviews don’t have much to do with the match we are about to watch.  There are some connections you can make, but oftentimes it feels like the order of clips was randomly chosen.  If you saw the great 5 minute Lesnar sit-down interview promo the WWE ran back in April after Lesnar’s return, you should know what to expect from this interview.  What worked great in 5 minutes doesn’t work as well over this many segments, though.  They become very repetitive, with Lesnar basically talking about how he is a soulless machine and an ass-kicker in many different ways.  Lesnar also isn’t a great interview, and that starts to become apparent here.  The most entertaining aspect of the interview was just waiting to see what bizarre statement Lesnar would make next.  It’s certainly not worth going out of your way to see. 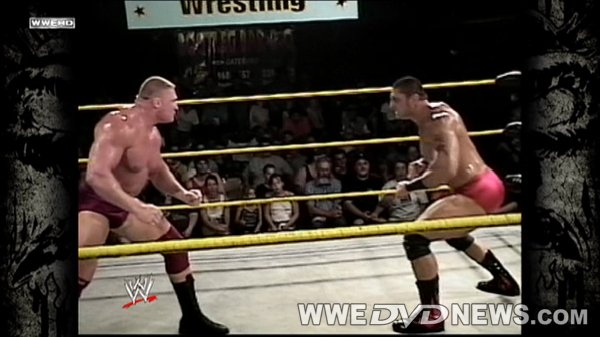 A standard match that feels like it’s taking place in the “training league”.  Not bad, but very basic. Fun to see Batista chain wrestling.

Like the other OVW match, a very simple tag team match.  Lesnar & Benjamin have pretty good chemistry together; I can’t say that much is true for Rico & Prototype (Cena).

A glorified squash match.  A great finish, which makes Lesnar look like a monster and Heyman look like the diabolical trainer.

For the finals of a major tournament, this match was shockingly short.  Not bad while it lasted, but it never shifts out of second gear and the finish comes out of nowhere. 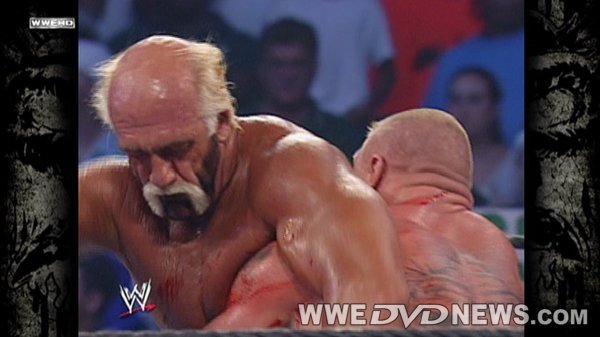 I’m not going to pretend that this match is a technical masterpiece, but the booking is so perfect that I needed to give it a high star rating.  Hogan was super over with the crowd at this point, and the way Lesnar beats him was excellent.  A classic visual to end this episode of SmackDown.

This match is very competently put together, but there’s nothing unique about it that elevates it from “very good” to “great”.

Another glorified squash match.  The fun part about this match is watching a young Orton take such a beating.

For a match that ends in a non-finish, its still good while it lasts.  Lesnar & Undertaker have great chemistry, and they even make the non-finish work.  Unfortunately, on this DVD not all of the post-match is included (they cut out the great moment where Taker throws Lesnar through the Unforgiven logo). 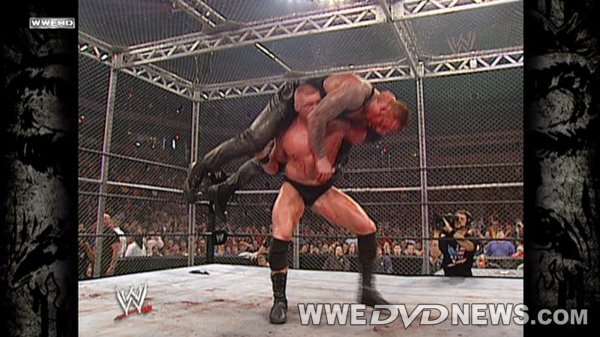 One of the better Hell in a Cell matches of all time.  Great use of the cell gimmick without doing any crazy spots on top of the cell.  As mentioned above, the chemistry here is fantastic.

This match is joined in progress at Lesnar’s entrance (#29).  Despite being a huge fan of the Rumble match, even I have to admit this is one of the weaker installments.

A well put together, but unspectacular, match.  A good build for the WrestleMania main event between Lesnar & Angle. 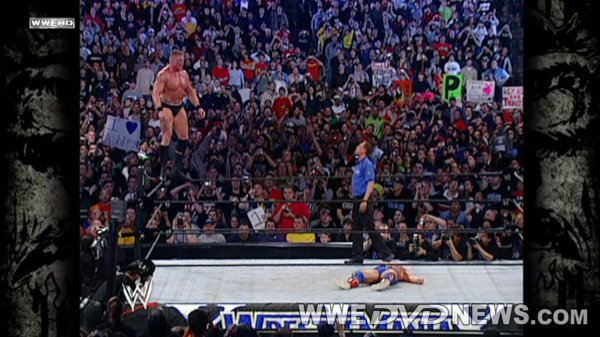 An excellent technical contest that, unfortunately, is remembered more for the botched Shooting Star Press than the great wrestling.

You can begin to see glimpses here of what Cena will become, but this was his first shot at a high-profile match.  A fun match, but nothing memorable.

In a 60-minute match, pacing will either make or break it.  The pacing in this one is great, and the match never drags throughout the course of the hour.  Lesnar & Angle created many different “stages” for the match to enter, which helps keep it interesting. 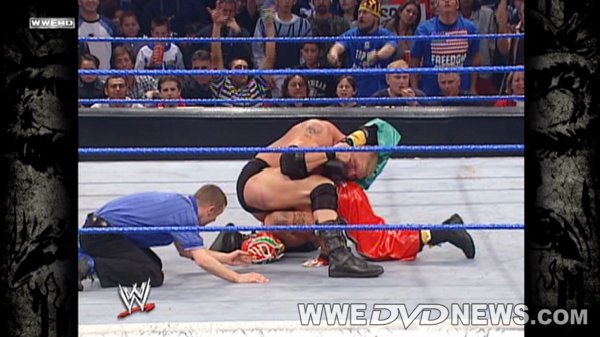 The big man vs. little man match has been done many times before, but Lesnar & Mysterio found ways to keep it different in this match.  This is the biggest sleeper match on the entire DVD.  Also, the match is won by one of my favorite “forgotten finishers” in the WWE, the Brock Lock.

The ending of this match is amazing (and I still kind of hate that it was recreated last year).  The rest of the match is fine, but ultimately, it doesn’t matter.

The term “disasterpiece” is sometimes used to describe big-budget, high prestige films that end up being bloated, brilliant failures.  This match is wrestling’s equivalent of a “disasterpiece”.  As bad as it may be, the spectacle is fascinating, and if you’ve never seen this match, it truly is a must-see for all the wrong reasons.

“The Landscape of the WWE Has Been Drastically Changed”: Closing Thoughts 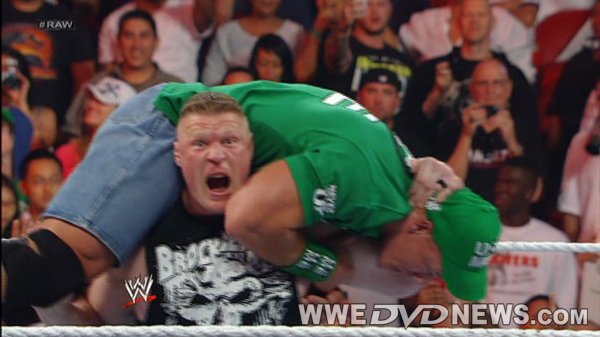 With most WWE DVD releases, the answers to the questions “Is this a good DVD?” and “Would you recommend someone buy this DVD?” are the same.  In this case, though, the answers to those questions are going to be different for an umber of fans.  Yes, this is a good DVD with some classic matches, and I had no problems sitting back and enjoying it.  However, for a good number of fans, I wouldn’t necessarily recommend buying it.

The main reason this DVD is so good is because of a great collection of bonus matches.  Lesnar was great in the ring, and it shows throughout Discs 2 and 3.  Most of the great matches are available on other DVD’s, though.  If you are missing a good number of these matches from your collection, then I would heartily recommend this DVD.  If you followed WWE in 2002 and 2003, you will probably enjoy the nostalgia trip as well.  If your main reason to pick up the DVD is for the documentary or new interview, I don’t think there is enough here to justify the purchase.  There are a few bonus segments on Disc 1, including Lesnar’s WWE debut and his 2012 return, and I am happy that I have both of these moments on DVD.  I’d be shocked if Lesnar’s return isn’t on this year’s best of Raw & SmackDown set, though.  Again, this DVD is very enjoyable, but if you are a long time collector, you probably already have a good number of these matches on DVD (not to mention the original documentary).

Let me know your thoughts in the comments below, and I’ll be back next week with a review brought to you by the New World Order.