Should I begin by saying this release was a 4/10 or has that joke been beaten into the ground already?

As is the norm with the “Timeline” releases, Kayfabe Commentaries front man Sean Oliver sits down with the interviewee and they chronologically discuss the events and major milestones of the year in question.

1992 in WWE will always hold a special place in my heart (or Hart – see what I did there?) as this was the year in which I became a fan. So to say I was looking forward to this one when it was first announced a few months ago would be somewhat of an understatement. What made it even cooler for me was the fact that my second favorite Superstar of the era (sorry Bret, Randy Savage took the #1 spot) would be the featured star. Honestly, I don’t know that the folks at Kayfabe Commentaries could have found a more qualified or appropriate interview subject. 1992 was the ascension year for Bret Hart, coming from being Intercontinental Champion, to headlining the biggest SummerSlam in history to closing the year as “the man” and WWE Champion, all amidst a backdrop of scandals and controversies which were rocking WWE to its very core.

The total run time for this feature is a tiny bit over 2 hours, 15 minutes and the set is available as both a physical DVD as well as On Demand via WWNLive.com. In addition the DVD was available to 50 individuals as a special “signature edition”; for those unaccustomed the signature editions feature a bonus signed disc and a special alternate cover art.

However despite my anticipation for this set, I did have one hesitation going in… would Bret’s status with WWE influence the answers he gave, i.e. would he tow the company line? This was something which really hurt Fit Finlay’s 2006 “Blue” WWE Timeline release in my opinion; however after only a few minutes my concerns were quickly dispelled as the interview progressed. Additionally as the interview progressed forward it was clear that Bret became more comfortable with Sean and the guys as the further we got into the interview his willingness to open up increased, similar to what we saw with the Roddy Piper Timeline a few months back (also a release worth checking out). 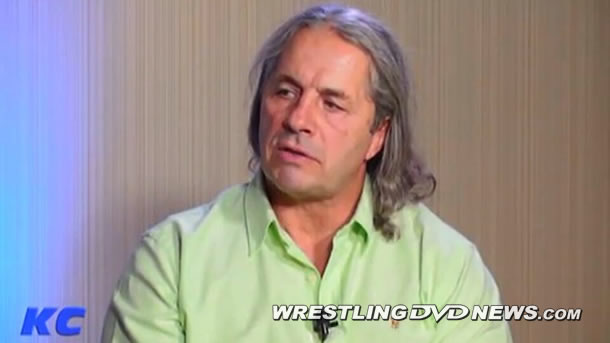 As you may have expected Bret does have an axe, and his axe is always in need of sharpening – especially when it comes to discussing Hulk Hogan and Ric Flair (Flair in particular, whom Bret takes a number of shots at during the interview). The willingness to take a shot at “Naitch” is especially evident when discussing Flair’s matches with Hogan in the early part of the feature and again when discussing the famous story of when Vince McMahon sent Ric Flair and Randy Savage back out to the ring to completely do-over their WWE Title change match in September 1992.

As you may have expected the big topics of the year are covered in great detail, particularly the rumors of Bret seeking his fortunes in WCW and exactly how far these discussions went, the WrestleMania VIII match with Roddy Piper, the build to and events surrounding the SummerSlam match with Davey Boy Smith and of course his capturing of the WWE Championship in October. 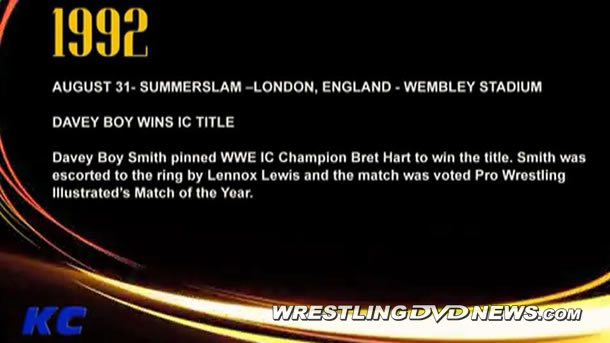 Are there events/milestones which weren’t covered? Of course, but unless the format is changed to a four or five hour interview then everything was never going to be covered. Other hot topics for 1992 would of course be the steroid scandals which were really kicking into a higher gear along with the sex scandals – particularly involving “ring boys” and the alleged rape towards Rita Marie (the female referee). Bret doesn’t really dish any “dirt” on these topics, but I think it would be unfair to expect him to, he does however provide his personal view point on these events.

Another segment of the interview which was fun was the segment where Bret discusses what makes up the ideal wrestler, I’m sure most wouldn’t agree with the weightings which he gave some guys – especially those pertaining to himself; but I guess you’ve got to have an ego in the ‘rasslin biz. Finally some of the most fun topics which were discussed surrounded the original, original plans for SummerSlam 1992 and just who Bret’s opponent was to be, discussion of the WBF (World Bodybuilding Federation), ICO-PRO and Bret’s memories of working with Simon Cowell (of X-Factor/American Idol fame) on the SlamJam album. 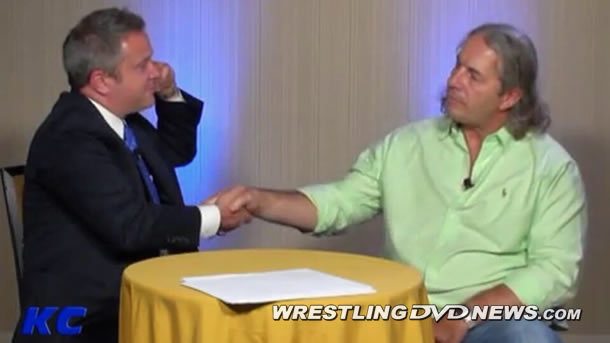 I really enjoyed this WWE Timeline with Bret Hart; the Timeline series has become my absolute favorites series of Kayfabe Commentaries releases. I would highly recommend this release in particular as I’m more than confident that you will find it a highly entertaining 2 hours, 15 minutes. Overall I would be more than happy to give this 4 + 4 out of 10″ (or simply put: 8/10).

“Timeline: The History of WWE – 1992” is available now at KayfabeCommentaries.com as a physical DVD or to stream instantly as VOD with WWNLive.