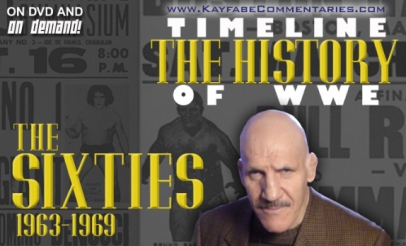 The Timeline series is far and away my favorite series released by Kayfabe Commentaries. Each volume takes us through a year (or more) of the history of WWE/WCW/ECW, and a wrestler who had a key role in that era gives thoughts on the important matches and moments.  In general, KC has chosen great interview subjects for each year they’ve surveyed.  For the latest release, they’re going back to the beginning, and looking at the WWE throughout the 1960’s.  Of course, there was no one else who could have served as the interview subject but Bruno Sammartino, who held the WWE Championship throughout nearly this entire period.  Bruno has a ton of great stories, and gives a great overview of an era rarely discussed today.  The complete runtime of the interview is approximately 2 hours, 25 minutes. 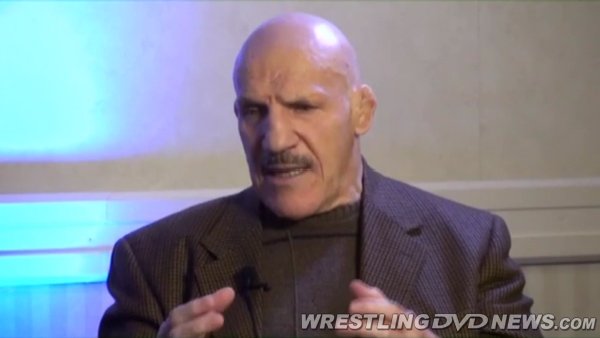 Even for fans that consider themselves “wrestling historians”, there’s a lot that remains unknown about the WWE in the sixties.  Since there isn’t too much surviving footage and the era itself isn’t all that popular, the WWE has never released any sort of home video focusing on this older era.  There have been books and a few other home videos that touch on this time period, but it’s rarely done in great detail.  This all leads to the biggest strength of this DVD: there is a huge amount of new information here.  I had some general ideas about the WWE in the sixties before going into this DVD, but I certainly wasn’t aware of any of the details, and didn’t know too much about the key characters of the era.  Even someone as important as Vince McMahon Sr. has never been discussed in the level of detail he is discussed here.  Unlike some other shoot interviews, this release falls on the “informative” side more than the “scandalous” side.  You’re going to learn a lot of new information about the industry at the time, rather than getting a bunch of backstage gossip.

This tone is in large part due to Bruno.  Bruno presents all of his stories in a very informative way; it’s clear that he isn’t trying to “bury” anyone.  He will acknowledge if there was a wrestler he didn’t really get along with (see Buddy Rogers), and usually will let you know how this may impact the story he is telling in any way.  I’m not going to pretend Bruno has a level of charisma seen in interviews with guys like Paul Heyman or Jim Cornette, but it is still very easy to listen to him talk about wrestling for 2+ hours.  He comes across as very credible, with a keen mind for the business.  I fully believed all of the stories he was telling. 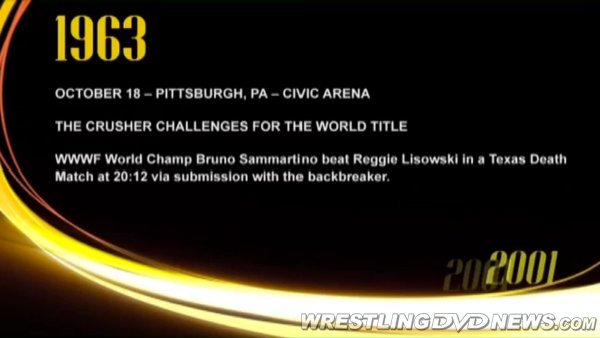 Obviously, you’re going to hear about a ton of different wrestlers over the course of this interview, from Buddy Rogers to Lou Albano to Bobo Brazil.  The biggest story that stood out to me was the reported riot that occurred the night Freddie Blassie fought Bruno to a DQ finish in Madison Square Garden.  One of Frank Sinatra’s “boys” (as Bruno refers to him) then came backstage and reportedly threatened to shoot Blassie.  These types of rumors are addressed to Bruno throughout the entire interview.  Host Sean Oliver will ask a few true/false style questions in regards to these types of wild rumors.  I also enjoyed hearing a bit about the WWE’s relationships with Japanese wrestling promotions, in particular those run by Giant Baba and Antonio Inoki.  I knew these relationships existed, but this is something we really haven’t heard discussed anywhere before.  These are just a few of the many stories you will hear throughout the interview. 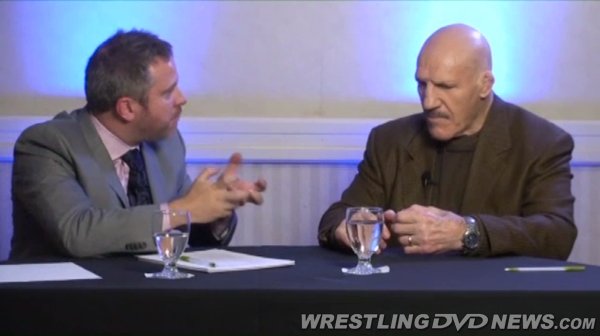 I wanted to briefly touch on Sean Oliver, who hosts most of KC’s releases.  He did a great job coming across as extremely knowledgeable about the subject matter in this interview.  It’s possible he may just be an expert on sixties wrestling, but I’m guessing he had to do quite a bit of research to prepare for this interview.  It clearly showed, and he came across very well.  He also did a good job of pressing Bruno to tell interesting stories without just “digging for dirt” on other wrestlers.  The questions were respectable, but still interesting, which can be a difficult line to ride during shoot interviews.

I had a great time watching this interview.  I can’t think of the last DVD I watched where so much of the information was completely new to me.  This is a great history lesson on an early period in wrestling that will never get this type of detailed coverage from the WWE.  Bruno was the perfect choice for the interviewee, and he gives some great stories.  My only major gripe was the “Timeline facts” that would occasionally scroll across the bottom of the screen.  They were very infrequent, but they scrolled way too fast, and I recall one having a minor typo.  I would highly recommend checking out this release from Kayfabe Commentaries; this may very well be their best installment of the strongest series they release.

“Timeline: History of WWE – The Sixties” is available at KayfabeCommentaries.com.

There are also special Signature Editions available with artwork autographed by Bruno.

Be sure to check out the deals today at WWEShop.com as we approach Christmas. There are WWE Blu-rays on sale from only $5.99 each and DVDs from $2.99 each!

Just SOME of the DVD/Blu-ray deals to be had (today only) include the following:

Link to sale: http://bit.ly/DVDBlurayDeals (choose categories on the left)