Kayfabe Commentaries has teamed up with WrestleCrap for its latest release, and the pairing is pretty natural for a countdown of wrestling’s five crappiest gimmicks.  This release is part of the current “season” of Wrestling’s Most… titles, and features many of the same panelists that were featured on Wrestling’s Most… Despised.  Of course, this title has a much more lighthearted tone, and even if it is somewhat slight, it still is a fun watch.

The runtime of the countdown is approximately 45 minutes.  Note that spoilers will follow for the 5 gimmicks featured on the countdown. 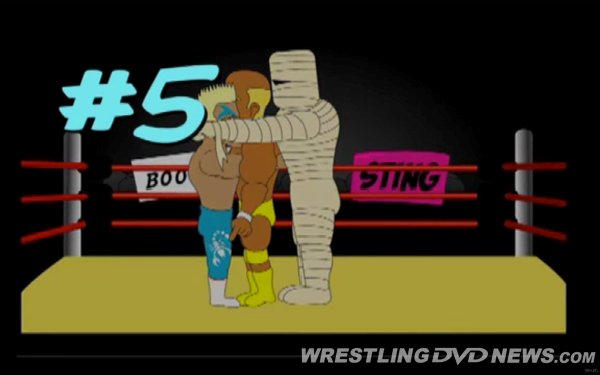 This countdown, like many of Kayfabe Commentaries’ releases, was clearly designed for hardcore wrestling fans.  There is an assumption that fans watching this video will have some familiarity with the gimmicks discussed, and more so with the men involved in creating them behind the scenes.  While discussing The Ding Dongs, Jim Herd is mentioned fairly often.  If you don’t know who Jim Herd is, you may be lost a bit.  This works for long-time fans, because there’s no time wasted giving backstage explanations of things most fans already know.  If you are a reader of this website, you are probably a pretty big wrestling fan, and will appreciate not being “spoken down to”.

Also, much like the previous Wrestling’s Most video, the more interesting the subject, the more interesting the discussion.  The panelists are all fairly entertaining (I even enjoyed New Jack here), but they just had more to say about some gimmicks than others.  Two of the less interesting segments were the discussions of The Yeti at #5 and The Ding Dongs at #2.  Since these gimmicks were relatively short lived, and the men portraying these characters aren’t exactly legendary, there wasn’t too much to say besides “wow, this is bad”.  Yes, you will still get a few laughs watching them react to the ridiculous segments, but nothing is all that substantive.  The only standout of the discussion of The Ding Dongs is the claim that Jim Herd should basically get a crappy gimmick list all to himself.  The other three gimmicks on the list, The Red Rooster, The Shockmaster, and The Gobbledy Gooker, lead to much more interesting discussions. 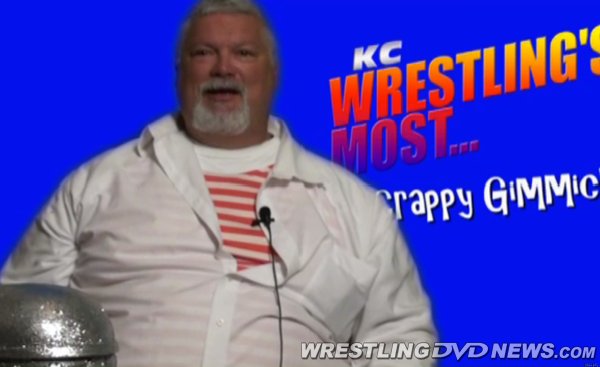 The Red Rooster gimmick is one of the more interesting in wrestling history, since Terry Taylor was a pretty reliable worker before being given such a goofy gimmick.  The discussion of Taylor overall is pretty interesting.  He’s a wrestler who doesn’t get talked about all that often, so it’s nice to hear some stories about him.  Similarly, the discussion of the Gobbledy Gooker leads to a nice discussion of Hector Guerrero’s role in taking on the character.  It seemed like Guerrero embraced the character, which makes it even more fun.  Of course, the rumors about the other men who may have been in the egg are discussed, which is also an entertaining discussion.  As great as these segments were, though, the real highlight was the breakdown of The Shockmaster.  Fred Ottman, who portrayed this character (among many others), is one of the interview subjects, so we get to hear from the man himself about the creation of the character and his infamous debut.  Add in anecdotes from all of the other wrestlers being interviewed, and you get a great picture of why this character has lived on in infamy.  I think the fact that everyone likes Ottman so much also helps in the newfound “appreciation” of this moment.

Technically, the fact that KC can’t show any actual wrestling footage could have been a complaint for any of their releases reviewed thus far, but this is the first time that lack of footage became noticeable.  If you haven’t seen all of the famous clips referenced in this countdown, you won’t fully appreciate the commentary from the wrestlers.  During the segment on The Yeti, we even watch the wrestlers watching the footage of The Yeti’s debut.  This just drew my attention to the fact that we can’t be watching the footage at the same time.  Sure, you can pause the video, head to YouTube (or the WWE Network) and watch the footage, but you still don’t get it as part of the actual product.  For long-time fans, this isn’t a big deal, since you are already familiar with so much of the footage, but I felt like this time, KC really made it noticeable that they couldn’t show us the clips themselves. 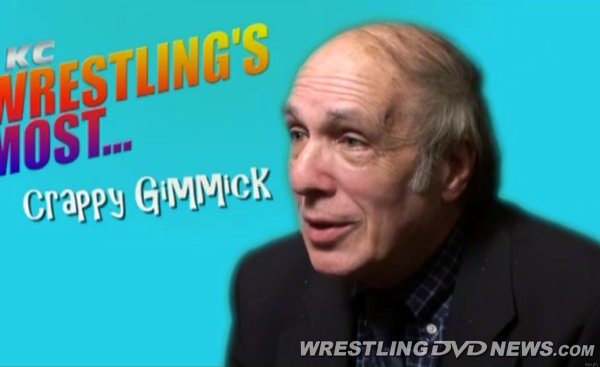 Everyone loves watching and talking about bad gimmicks, so this countdown is a fun 45 minutes.  It is a big slight compared to a lot of Kayfabe Commentaries’ other releases, so this video certainly won’t blow you away with loads of new information.  I think the countdown fully reaches its goal, though: it’s an entertaining look back at some crappy wrestling, with some funny comments from the panelists throughout.

“Wrestling’s Most… Crappy Gimmick” is available now at KayfabeCommentaries.com.